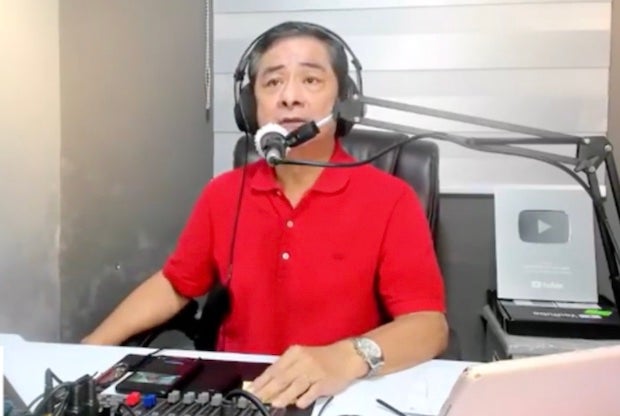 Percy Lapid was the host of “Lapid Fire” over AM radio station DWBL. (Photo from a video on the Facebook page of Lapid Fire)

MANILA, Philippines — The Philippine National Police (PNP) has vowed to bring justice for ambushed veteran broadcaster Percival Mabasa, more popularly known as Percy Lapid, who was gunned down near his home in Las Piñas City.

The PNP also said in a statement Tuesday that a probe is in motion to identify his assailants as well as the reason behind his killing. Lapid was a staunch critic of the Duterte and Marcos administrations.

A special investigation task force has been formed by the Las Piñas City station of the National Capital Region Police Office (NCRPO) to lead the probe while the PNP Media Vanguard was tasked to oversee it.

Estomo later added: “We will update the public in any smallest detail as to the development of the investigation. We guarantee to bring swift justice to the victim and his family.”

“The PNP vows to bring justice to an attack against a member of the media industry. Investigation is underway to determine the culprits and motive of this case,” it said, noting that the police have since started coordinating with Lapid’s family and colleagues to gather more evidence and testimonies about the incident.

“While his work as a radio commentator involves discussion of critical issues, we cannot fully conclude as of this time that the motive is work-related, but we are exploring all possible angles as of this time,” the PNP added.

“NCRPO acknowledges the indispensable part of our media friends in fair, truthful, and timely dissemination of information to multitudes of audiences,” he said.

“We will update the public in any smallest detail as to the development of the investigation. We guarantee to bring swift justice to the victim and his family,” he added.

Lapid was shot dead on Monday night by a motorcycle-riding suspect at the gate of a subdivision along Aria St. in Talon Dos, police said. Another suspect, an alleged accomplice, onboard a Toyota Fortuner bumped the rear portion of the victim’s Toyota Innova before the shooting happened, police also said.

Lapid hosted a radio news commentary show on DWBL 1242 called Lapid Fire, where he aired sharp criticisms against the government.

He is the second journalist reported to have been killed under the Marcos administration.

Last September 18, radio broadcaster Rey Blanco – who was known for his hard-hitting commentaries in Nosi Balasi – was stabbed to death in Mabinay, Negros Oriental.

To recall, the Philippines in 2021 kept its spot as the seventh worst country when it comes to unsolved killings of journalists, according to the Committee to Protect Journalists’ Global Impunity Index.