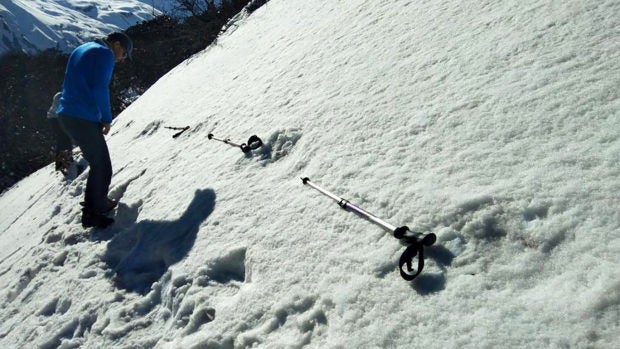 In this handout photo taken by the Indian Army on April 9, 2019, Indian men measure large footprints in the snow, sighted by the Indian Army, near the Makalu Base Camp in the North-Eastern Himalayas. AFP FILE PHOTO

NEW DELHI — Rescue teams resumed their search of the Indian Himalayas on Wednesday for 26 missing climbers struck by an avalanche that killed at least four members of their expedition.

Several dozen climbing trainees were caught in Tuesday morning’s snowslide near the summit of Mount Draupadi ka Danda-II in the northern state of Uttarakhand.

Twelve people were rescued from the scene of the incident, around 4,900 meters (16,000 feet) above sea level, before heavy snow and rainfall halted rescue efforts for the night.

“At least 26 people are still missing,” she said, adding that none of those rescued had serious injuries but some were under observation at hospital.

Four climbers were confirmed dead on Tuesday after members of the expedition were stuck in a crevasse after the avalanche hit.

Local media outlets reported that rescuers had spotted an additional six bodies before bad weather stopped the search, but the state disaster agency has not yet raised its official toll.

The Nehru Institute of Mountaineering said the group included 34 of its trainees and seven instructors.

Senior disaster management official Devendra Singh Patwal told AFP that two air force helicopters had been sent to the region to assist with the search.

Fatal climbing accidents are common on the treacherous terrain of the Himalayas, home to Everest and several of the world’s highest peaks.

In August, the body of a mountaineer was recovered two months after he fell into a crevasse while crossing a glacier in the neighbouring state of Himachal Pradesh.

And last week, renowned US ski mountaineer Hilaree Nelson’s body was found on the slopes of Nepal’s Manaslu peak after she went missing skiing down the world’s eighth-highest mountain.

On the day of Nelson’s accident, an avalanche hit on the 8,163-meter (26,781-foot) mountain, killing Nepali climber Anup Rai and injuring a dozen others who were later rescued.

Although no substantial research has been done on the impacts of climate change on mountaineering risks in the Himalayas, climbers have reported crevasses widening, running water on previously snowy slopes, and the increasing formation of glacial lakes.

Body of missing US ski mountaineer found in Nepal

Disaster in the Himalayas: How a rare February landslide left over 200 dead

Your subscription could not be saved. Please try again.
Your subscription has been successful.
Read Next
Quezon’s most wanted for rape falls
EDITORS' PICK
House energy committee chair Arroyo bats for cheap electricity
CBCP releases litany of thanks for better health
Omega Speedmaster super racing: Tiny device massive change
vivo Philippines offers a free bouquet of flowers and a premium necklace perfect for Valentine’s Day
US gets access to more PH bases
12-year data track poor training of PH teachers
MOST READ
Don't miss out on the latest news and information.