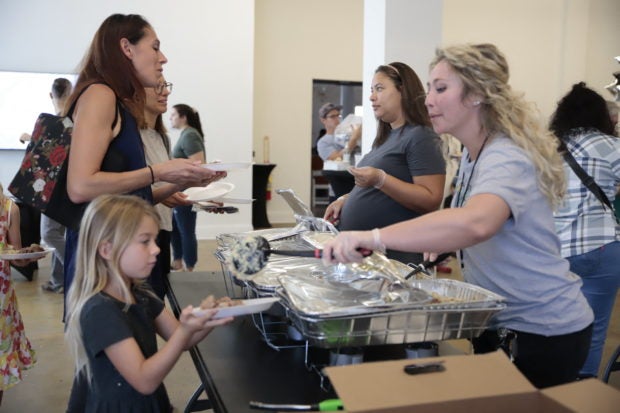 People enjoy a hot meal after attending a church service in Fort Myers, Florida, on October 2, 2022, five days after Hurricane Ian ripped through the state. AFP

Authorities say at least 76 people —  more than 100 according to US television networks citing local officials — died in one of the most powerful storms to hit the United States.

The Category 4 hurricane flattened whole neighborhoods on the Sunshine State’s west coast, knocking out power for millions of people, with hundreds of thousands still waiting for electricity to be restored Tuesday, and then tore up into North Carolina.

For Biden, who visited hurricane-hit Puerto Rico on Monday, the Florida trip also has an inescapable political dimension, taking him into the stronghold of both DeSantis and Biden’s scandal-plagued predecessor in the White House, Donald Trump.

The Democrat, who says he wants to seek a second term despite already being the oldest man ever in the job at 79, could realistically end up facing a rematch with Trump in two years or a challenge from the up-and-coming DeSantis.

DeSantis has been a caustic critic, as he builds his brand of muscular right-wing politics in a bid to replace Trump as the biggest name in the Republican party. Biden has returned fire, painting DeSantis as part of what he says in an increasingly extreme right.

The hurricane, however, has prompted a truce, with phone calls between the two men and acknowledgement from DeSantis that the federal government was quick to provide assistance.

“There will be plenty of times, plenty of time to discuss differences between the president and the governor,” she said. “Now is not the time.”

Biden’s main goal, Jean-Pierre said, is to check that “the people of Florida have what they need.”

Biden is set to view ravaged areas in southwestern Florida from a helicopter, then receive a briefing from federal emergency management chief Deanne Criswell and DeSantis, among other officials.

Biden, accompanied by First Lady Jill Biden, will also meet with small business owners and local survivors of the storm, before making a televised address at Fishermans Wharf, Fort Myers.

He will “confirm his commitment to the people of Florida as they recover and rebuild,” Jean-Pierre said.

Biden’s visit to Puerto Rico covered similar ground, although there he was updated on recovery from Hurricane Fiona, which hit the island last month.

Again, Biden stressed the unity message, telling the territory — which often feels overlooked by the mainland and the federal government — that “all of America’s with you.”

The disagreements with DeSantis, however, are many and will likely resurface as soon as Floridians recommence a semblance of their previous lives.

DeSantis opposed Biden on many of his Covid-19 policies during the pandemic, accusing the president of overreach. He has likewise made himself the standard bearer of the conservative backlash to growing tolerance for LGBT issues — something Biden has championed.