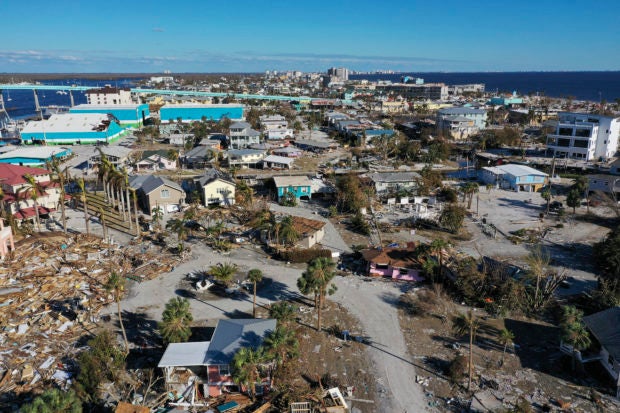 In this aerial view, the destruction left in the wake of Hurricane Ian is shown on October 02, 2022 in Fort Myers Beach, Florida. Fort Myers Beach sustained severe damage by the Category 4 hurricane which caused extensive damage to the southwest portion of Florida. AFP

PARIS — Climate change increased the rainfall from Hurricane Ian by more than 10 percent, according to a new quick-fire analysis, as one of the most powerful storms ever to hit the United States devastated parts of Florida.

Ian “could be the deadliest hurricane in Florida history”, President Joe Biden said after the storm brought ferocious winds, turned streets into churning rivers that swept away homes and left an unknown number of casualties.

According to a rapid and preliminary analysis, human-caused climate change increased the extreme rain that Ian unleashed by over 10 percent, US scientists said.

“Climate change didn’t cause the storm but it did cause it to be wetter,” said Lawrence Berkeley National Laboratory’s Michael Wehner, one of the scientists behind the new finding.

The researchers compared simulations of today’s world — which has warmed nearly 1.2 degrees Celsius since pre-industrial times — with counterfactual simulations of a world without human-induced climate change.

Wehner said these were “conservative estimates”, adding that while they are not peer reviewed, they are based on methods used in a study on the 2020 Atlantic hurricane season, which was published in April in the journal Nature Communication.

Climate change from emissions of planet-heating greenhouse gases is warming the ocean’s surface and increasing moisture in the atmosphere that fuels hurricanes.

Although the total number of tropical storms, or cyclones, may not increase, scientists say warming is whipping up more powerful cyclones with stronger winds and more precipitation.

“Human-caused climate change is affecting hurricanes in many ways including causing them to intensify faster, be stronger overall, and dump a lot more rain,” tweeted climate scientist Katharine Hayhoe, who was not involved in the research.

For each degree Celsius of warming, scientists expect the water in the atmosphere to increase by around seven percent.

But Wehner said that his research found that storms are “more efficient” at turning the available moisture into rainfall.

Ian swept across Cuba on Tuesday, downing the country’s power network, before slamming into the Florida coast on Wednesday as a strong Category 4 hurricane.