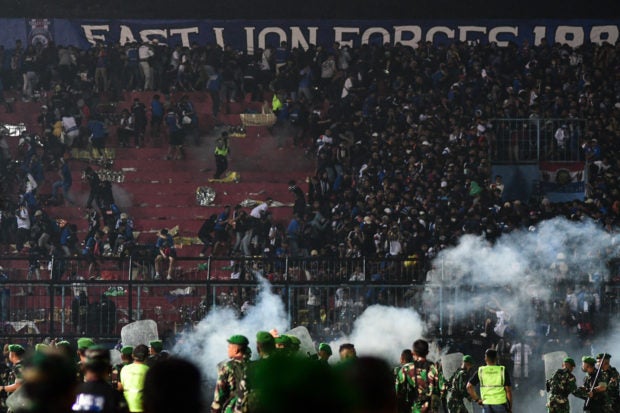 This picture taken on October 1, 2022 shows security personnel (lower) on the pitch after a football match between Arema FC and Persebaya Surabaya at Kanjuruhan stadium in Malang, East Java. AFP

MALANG, Indonesia — Indonesia’s government called on the country’s police Monday to identify and punish whoever was responsible for a stadium stampede that left 125 people dead, as anger mounted over one of the deadliest disasters in the history of football.

The tragedy on Saturday night in the city of Malang also saw 323 people injured after officers fired tear gas in a packed stadium to quell a pitch invasion, triggering a stampede.

“We ask the national police to find the perpetrators who have committed crimes in the next few days,” Indonesia’s chief security minister Mahfud MD said in a broadcast statement, without specifying who he was referring to.

“We asked them to unveil who has perpetrated the crimes and that action must be taken against them and we also hope the National Police will evaluate their security procedures,” he added, announcing a task force for the investigation had been formed.

The incident unfolded when fans of home team Arema FC stormed the pitch at the Kanjuruhan stadium after their loss 3-2 to bitter rivals Persebaya Surabaya.

Police responded by launching volleys of tear gas into packed terraces, prompting spectators to rush en masse to small gates where many were trampled or suffocated, according to witnesses.

Police described the incident as a riot in which two officers were killed but survivors accuse them of overreacting and causing the deaths of scores of spectators, including a five-year-old boy.

“One of our messages is for the authorities to investigate this (incident) thoroughly. And we want accountability, who is to blame?” said 25-year-old Andika, who declined to give his last name.

“We want justice for our fallen supporters,” he said.

Outside the Kanjuruhan stadium on Sunday evening, people held a vigil beneath the roaring lion statue — the club’s symbol — to honor the victims.

But fresh graffiti daubed on the walls of the stadium revealed bubbling anger towards the authorities.

“My siblings were killed. Investigate thoroughly,” read one message scrawled on the stadium’s shutters, accompanied by a black ribbon and the date of the tragedy.

“ACAB”, an acronym for “all cops are bastards”, was sprayed on another wall.

In Jakarta, hundreds of football fans gathered outside the country’s biggest stadium on Sunday chanting “murderer! murderer!”, singing songs in support of Arema FC and placing police tape on the complex’s fence.

Indonesian President Joko Widodo announced a probe into the incident, but rights groups said it should be independent and officers should be held accountable for using tear gas in a confined area.

“We call on authorities to conduct a swift, thorough, and independent investigation into the use of tear gas at the stadium and ensure that those who are found to have committed violations are tried in open court,” Amnesty International said in a statement.

Mahfud said the task force would be chosen in the next 24 hours and would consist of government officials, analysts, ministry representatives, football organization officials, academics and members of the media.

He said authorities would announce the results of the probe as soon as possible.

“It is estimated the task can be concluded in the next two or three weeks,” he said.

Anger against the authorities gathered pace online, with many critical posts going viral in Indonesia.

“Investigate thoroughly. Firing tear gas in a closed space full of humans is a serious violation,” read one tweet that was liked 11,000 times.

The fallout came as more information emerged about the stampede, with Arema FC’s Chilean football coach saying “fans died in the arms of players”.

“The boys passed by with victims in their arms,” Javier Roca told Spanish broadcaster Cadena Ser.

“I think the police overstepped their mark.”

Fan violence is an enduring problem in Indonesia.

Witnesses of Saturday’s violence say fans of the home team Arema invaded the pitch after their loss to Persebaya Surabaya.

Persebaya Surabaya supporters had not been allowed to buy tickets to the game, due to the fear of violence.

After the deadly stampede, Arema fans threw rocks at officers and torched vehicles including a police truck on the streets of Malang, according to the police.

FIFA’s president Gianni Infantino called the tragedy a “dark day” for football but stopped short of calling for any action by authorities.

The world football governing body’s safety guidelines prohibit the carrying of crowd control gas by police or stewards at pitchside.

World football united to mourn the tragedy, with Spanish clubs holding a minute’s silence and top teams across Europe sending their condolences online.