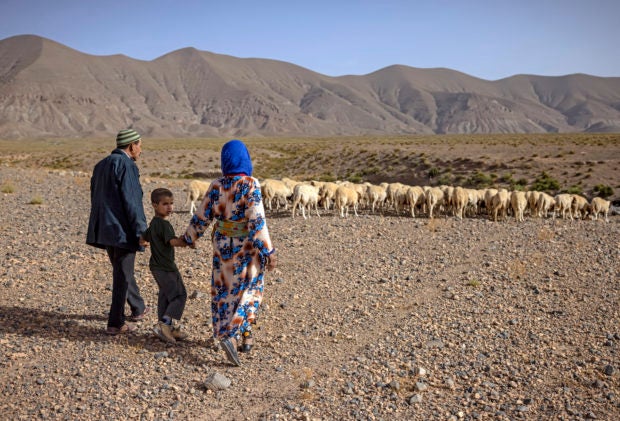 A couple hold their son’s hands as they herd sheep near the village of Amellagou where Morocco’s last nomads reside, on September 2, 2022. AFP

AMELLAGOU, Morocco — In the blistering desert of Morocco, the country’s last Berber nomads, the Amazigh, say their ancient lifestyle is under threat as climate change brings ever-more intense droughts.

“Everything has changed,” said Moha Ouchaali, his wrinkled features framed by a black turban. “I don’t recognise myself anymore in the world of today. Even nature is turning against us.”

Ouchaali, an Amazigh man in his 50s, has set up an encampment near a dry riverbed in barren hills about 280 kilometers (174 miles) east of Marrakesh.

Amid the rocky, arid landscape near the village of Amellagou, he and his family have pitched two black woollen tents, lined with old animal fodder bags and fabric scraps.

One is for sleeping and hosting guests, the other serves as a kitchen.

“Water has become hard to find. Temperatures are going up and the drought is so harsh, but we can’t do much,” said Ouchaali.

His tribe, the Ait Aissa Izem, has spent centuries roaming the country to find food for their animals, but their way of life is steadily disappearing.

According to the last census, just 25,000 people in Morocco were nomadic in 2014, down by two-thirds in just a decade.

“Before, we managed to live decently, but all these droughts, more and more intense, make our lives complicated. Without water we can’t do anything.”

This year has seen Morocco’s worst drought in four decades.

Rainfall is set to decline by 11 percent and average temperatures set to rise by 1.3 percent by 2050, according to forecasts from the Ministry of Agriculture.

“Nomads have always been seen as a barometer of climate change,” said anthropologist Ahmed Skounti.

“If these people, used to living in extreme conditions, can’t resist the intensity of global warming, that means things are bad.”

The drying up of water resources was “the last nail in the coffin for nomads”, he added.

In easier times, the Ait Aissa Izem would pass the summer in the relatively cool mountain valley of Imilchil, before heading to the area around regional capital Errachidia for the winter.

“That’s ancient history,” Ouchaali said, sitting in his tent and taking a sip of sweet Moroccan tea. “Today we go wherever there’s a bit of water left, to try to save the animals.”

Severe water shortages have even pushed some nomads to take the rare step of taking out loans to feed their livestock, their most vital asset.

“I’ve gone into debt to buy food for my animals so they don’t starve to death,” said Ahmed Assni, 37, sitting by a tiny, almost dried-out stream near Amellagou.

Saeed Ouhada said the difficulties had pushed him to find accommodation for his wife and children in Amellagou, while he stays with his parents in a camp on the edge of the town.

“Being a nomad isn’t what it used to be,” he said. “I’ll keep at it because I have to. My parents are old but they refuse to live in a town.”

Driss Skounti, elected to represent nomads in the region, said the area used to have around 460 tents. Today, they don’t even add up to a tenth of that number.

Some Moroccan nomads have given up their ancient lifestyle altogether — and not just because of the ever-worsening climate.

“I was tired of fighting,” said Haddou Oudach, 67, who settled permanently in Er-Rich in 2010.

“We’ve become outcasts from society. I can’t even imagine what nomads are going through today.”

Moha Haddachi, the head of an association for the Ait Aissa Izem nomads, said social and economic changes were making a nomadic lifestyle ever-more difficult.

The scarcity of pastures due to land privatisation and agricultural investment also contributes to the difficulties, he said.

“Agricultural investors now dominate the spaces where nomads used to graze their herds.”

Nomads also face hostility from some villagers, angered by those camping in their region despite officially belonging to other provinces.

A law was passed in 2019 to delineate where nomads and sedentary farmers could graze their animals, but “nobody applies it”, Haddachi said.

Former nomad Oudach is despondent about “this era of selfishness where everyone thinks only of themselves”.

“It wasn’t always like this, we used to be welcomed everywhere we went,” he said.

Embarking on a life of nomadism offers little to young people.

“The new generation wants to turn the page on nomadism,” she said.

She now lives with an uncle in Er-Rich and is looking for professional training to allow her to “build a future” and escape the “stigmatising gaze that city people often have for nomads”.

Driss Skounti said he had little hope for the future of nomadism.

“Nomadic life has an identity and a tradition steeped in history,” he said, “but is doomed to disappear within 10 years.”

Meteorite hunters seek to strike it rich in Moroccan desert