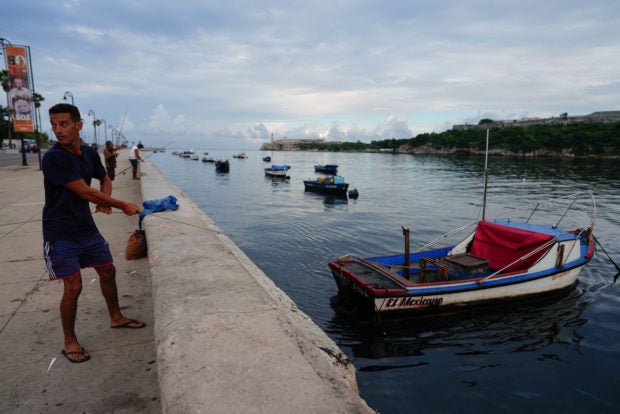 A fisherman prepares to move his boat from a canal ahead of the arrival of Tropical Storm Ian in Havana, Cuba, September 26, 2022. REUTERS

Both Florida and Cuba are preparing for Hurricane Ian to bring devastating winds and storm surges to their coasts this week.

The storm is expected to make landfall in Cuba on Monday and then lash Florida with storm surges and downpours.

Ian follows Hurricane Fiona, a powerful Category 4 storm that carved a path of destruction last week through Puerto Rico, leaving most of the U.S. territory without power and potable water. Fiona then barreled through the Turks and Caicos Islands, skirted Bermuda and slammed into Canada’s Atlantic coast, where critical infrastructure might take months to repair.

While scientists haven’t yet determined whether climate change influenced Fiona or Ian, there’s strong evidence that these devastating storms are getting worse.

Yes, climate change is making hurricanes wetter, windier and altogether more intense. There is also evidence that it is causing storms to travel more slowly, meaning they can dump more water in one place.

If it weren’t for the oceans, the planet would be much hotter due to climate change. But in the last 40 years, the ocean has absorbed about 90% of the warming caused by heat-trapping greenhouse gas emissions. Much of this ocean heat is contained near the water’s surface. This additional heat can fuel a storm’s intensity and power stronger winds.

Climate change can also boost the amount of rainfall delivered by a storm. Because a warmer atmosphere can also hold more moisture, water vapor builds up until clouds break, sending down heavy rain.

During the 2020 Atlantic hurricane season — one of the most active on record — climate change boosted hourly rainfall rates in hurricane-force storms by 8%-11%, according to an April 2022 study in the journal Nature Communications.

The world has already warmed 1.1 degrees Celsius above the preindustrial average. Scientists at the U.S. National Oceanic and Atmospheric Administration (NOAA) expect that, at 2C of warming, hurricane wind speeds could increase by up to 10%.

NOAA also projects the proportion of hurricanes that reach the most intense levels — Category 4 or 5 — could rise by about 10% this century. To date, less than a fifth of storms have reached this intensity since 1851.

How else is climate change affecting storms?

The typical “season” for hurricanes is shifting, as climate warming creates conditions conducive to storms in more months of the year. And hurricanes are also making landfall in regions far outside the historic norm.

In the United States, Florida sees the most hurricanes make landfall, with more than 120 direct hits since 1851, according to NOAA. But in recent years, some storms are reaching peak intensity and making landfall farther north than in the past – a poleward shift may be related to rising global air and ocean temperatures, scientists said.

This trend is worrying for mid-latitude cities such as New York, Boston, Beijing, and Tokyo, where “infrastructure is not prepared” for such storms, said atmospheric scientist Allison Wing at Florida State University.

Hurricane Sandy, though only a Category 1 storm, was the fourth costliest U.S. hurricane on record, causing $81 billion in losses when it hit the Northeastern Seaboard in 2012.

As for timing, hurricane activity is common for North America from June through November, peaking in September – after a summertime buildup of warm water conditions.

However, the first named storms to make U.S. landfall now do so more than three weeks earlier than they did in 1900, nudging the start of the season into May, according to a study published in August in Nature Communications.

The same trend appears to be playing out across the world in Asia’s Bay of Bengal, where cyclones since 2013 have been forming earlier than usual – in April and May – ahead of the summer monsoon, according to a November 2021 study in Scientific Reports.

It’s unclear, however, if climate change is affecting the number of hurricanes that form each year. One team of scientists recently reported detecting a rise in frequency for North Atlantic hurricanes over the last 150 years, according to their study published in December in Nature Communications. But research is still ongoing.

How do hurricanes form?

Hurricanes need two main ingredients — warm ocean water and moist, humid air. When warm seawater evaporates, its heat energy is transferred to the atmosphere. This fuels the storm’s winds to strengthen. Without it, hurricanes can’t intensify and will fizzle out.

While technically the same phenomenon, these big storms get different names depending on where and how they were formed.

Storms that form over the Atlantic Ocean or central and eastern North Pacific are called “hurricanes” when their wind speeds reach at least 74 miles per hour (119 kilometers per hour). Up to that point, they’re known as “tropical storms.”

In East Asia, violent, swirling storms that form over the Northwest Pacific are called “typhoons”, while “cyclones” emerge over the Indian Ocean and South Pacific.