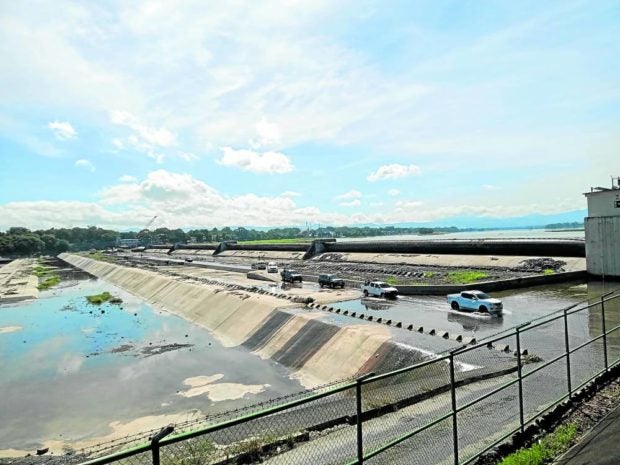 UP CLOSE | In this photo taken in May 2020, a convoy of vehicles brings a team from the Bulacan provincial government to Bustos Dam to inspect its rubber gates. (Photo by CARMELA REYES-ESTROPE / Inquirer Central Luzon)

CITY OF MALOLOS, Bulacan, Philippines — Bulacan Gov. Daniel Fernando has threatened to take legal actions against those involved in the long delayed P1-billion rehabilitation of the irrigation dam in Bustos town if the repairs are not immediately done.

Fernando, speaking before the provincial board on Sept. 29, called to task the Nueva Ecija-based ITP Construction Inc. and its foreign partner, the Chinese company Guangxi Hydroelectric Construction Bureau Co. Ltd. Consortium, saying there was no longer any basis to “dilly dally” since most of the restrictions related to the COVID-19 pandemic have been lifted.

The contractors of the Bustos Dam repair project, which involved the replacement of the six rubber gates of the dam damaged in May 2020, have reasoned that the pandemic lockdowns had prevented them from facilitating the importation of the replacements for the rubber gates.

With travel and movement of goods now essentially back to normal, Fernando said there is no longer any excuse for the contractors to delay the work.

“We must act now. We demand the immediate removal and replacement of all six gates under the contract for Bustos Dam. If it is not done, I will not hesitate to file civil and criminal cases against everyone involved in the transaction,” the governor said.

He said the contractors have been ignoring the countless follow-ups and demand letters sent to them by the National Irrigation Administration (NIA), done in close coordination with the provincial government.

Fernando said the NIA should also take responsibility for the repairs’ delay as it has impacted on 15,706 hectares of rice and vegetable fields in the province that no longer have the much needed irrigation facility, affecting 12,904 farmers.

These farmers have lost between P880.964 million and P2.690 billion in agricultural produce over the past two years, said the governor.

Fernando said the replacement of the rubber gates is also vital since the rainy season has arrived.

According to Fernando, each of the six rubber gates discharges 500 cubic meter per second (m3/s) of water. If all the six gates are destroyed or damaged, it will let out a raging water volume of 3,000 m3/s.

But even at 700-m3/s water discharge, the catch basin towns of Hagonoy and Calumpit are already submerged in floodwater, the governor said.