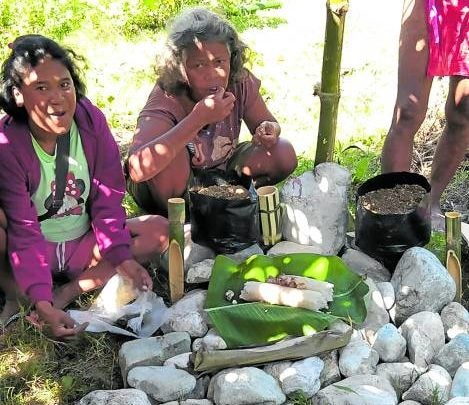 MEAL TIME | Dumagat folk share a meal of cassava before the diarrhea outbreak in Tanay, Rizal, in this photo posted by the nongovernmental organization Sandiwa on Facebook on Saturday. —SANDIWA FACEBOOK PHOTO

LUCENA CITY, Quezon, Philippines — The Dumagat tribe in a mountain village in Tanay town, Rizal province, is in dire need of help to address a diarrhea outbreak that has claimed four lives and downed at least a hundred people, a protection advocate group for indigenous people (IP) said on Sunday.

“There are others in different hospitals and more than a hundred tribesmen are sick in their communities,” Gina Maano, program coordinator of Sandiwa, a network of advocates for national minorities, said in a phone interview on Sunday.

Maano called on the national government, particularly the Department of Health and Department of Social Welfare and Development, as well as the Philippine Red Cross to send medical missions to address the outbreak in Sitio Nayon-Ilaya in Barangay Sta. Inez of Tanay.

“We’re afraid that the outbreak could spread to other communities,” she warned.

On its Facebook page, the local government of Tanay posted that it dispatched a medical team to Sta. Inez on Saturday.

Dr. Amor Dulce Rivera of the town medical team reported that the ailment among members of the IP community was traced to the spring water contaminated with feces.

“And it (outbreak) is fast spreading. The local and national government should act fast to prevent more would-be victims,” Tena said in a separate phone interview on Sunday.

Tena is a member of the “Samahan ng mga Katutubong Agta/Dumagat-Remontado na Binabaka at Ipinagtatanggol ang Lupaing Ninuno.” Most of them settle in the northern Quezon section of the Sierra Madre and Polillo Group of Islands off the Pacific Ocean.

Clifford Peñamante, an official of the disaster risk reduction management office in the town of General Nakar, Quezon province, said the diarrhea outbreak has reached their mountain village of Lumutan, which adjoins Sta. Inez.

“Yesterday, a team of local government medical workers has been immediately dispatched to the area,” Peñamante said over the phone on Sunday.

Maano appealed for food packs, medicine, cash aid and other forms of assistance for the IP.

“Many tribe members have evacuated to the lowland out of fear,” she said.

Sandiwa has been pooling volunteers to assist the affected tribesmen.

Maano said other individuals who want to be part of the mission can donate funds through “GCash 0947-6180881 Gi*a C.” or send a message to the Sandiwa Facebook page.