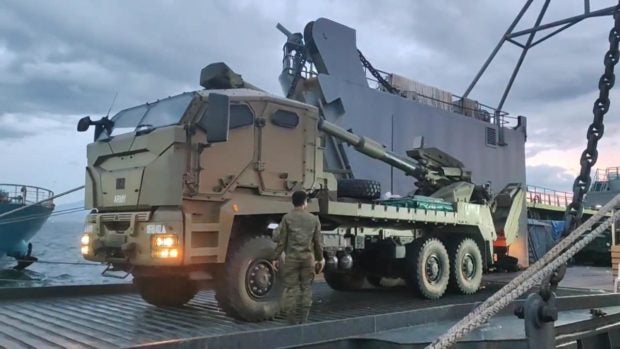 The military hardware was shipped from Naval Base Heracleo Alano, in Sangley Point, Cavite City on Sept. 24 after the send-off ceremony led by the Department of National Defense (DND) officer-in-charge, Senior Undersecretary Jose C. Faustino Jr.

Faustino, who used to be the country’s military chief, called the ATMOS a “game-changer” for internal security operations and suppressing the enemies of the state.

The acquisition of these assets was done under the Horizon 2 of the Revised Armed Forces of the Philippines Modernization Plan.

“This new capability will be utilized against the terrorist groups who are now on the run because of our relentless focused military operations,” said Maj. Gen. Galido, commander of the Army’s 6th Infantry Division and Joint Task Force Central.

He added that the eight ATMOS units will be distributed to various Army units to support counter-terrorism operations.

In Central Mindanao, Islamic State-affiliated organizations, such as the Bangsamoro Islamic Freedom Fighters, maintain pockets of strongholds in isolated villages, either along the marsh or in the mountains.

According to Galido, the ATMOS is the biggest gun in the Army arsenal which “can definitely be a game-changer in supporting and intensifying even further our focused military operations, particularly in central and south-central Mindanao.”

The equipment has automatic loading and digital fire control features and can deliver accurate fires up to 41 kilometers.

“An advantage of ATMOS is that it offers high accuracy and ‘shoot and scoot’ operation yet can operate on the existing road network and bridges found in the country,” Galido said.

“They are able to deploy even in rugged terrain while being able to respond to mission demands more quickly than towed howitzers,” he added.