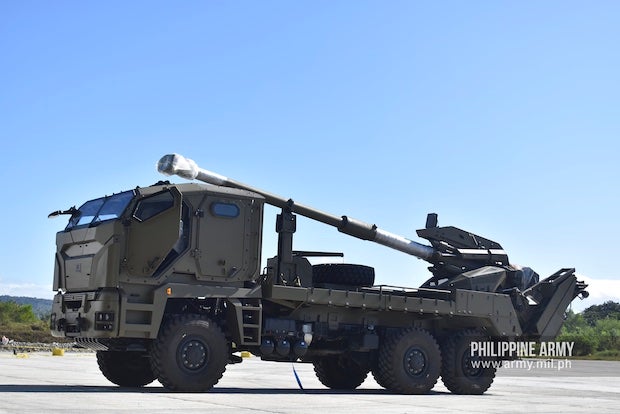 This is the Israeli-built  Atmos 155-mm self-propelled howitzer.  Two Army batteries in Western Mindanao will each get four of these howitzers. (File photo from the Facebook page of the Philippine Army)

The artillery system will be operated by the 10th Field “Rolling Thunder” Battalion of the Army Artillery Regiment (AAR). The weapon system has a maximum range of 40 kilometers depending on the ammunition, with a fire rate of eight rounds per minute for stationary indirect fire operation, and six rounds in 110 seconds for “shoot-and-scoot” configuration, according to Elbit Systems.

Army spokesperson Col. Xerxes Trinidad told the Inquirer that this would be the first time the Army will operate brand-new truck-mounted howitzers which can also be rapidly deployed in rugged terrain.

In December 2021, Elbit Systems completed the delivery of three batteries with 12 howitzer units for the Atmos artillery system worth P2.3 billion under a government-to-government deal between the Philippines and Israel.

The remaining battery will stay at the AAR headquarters in Fort Magsaysay, Nueva Ecija, Trinidad said.