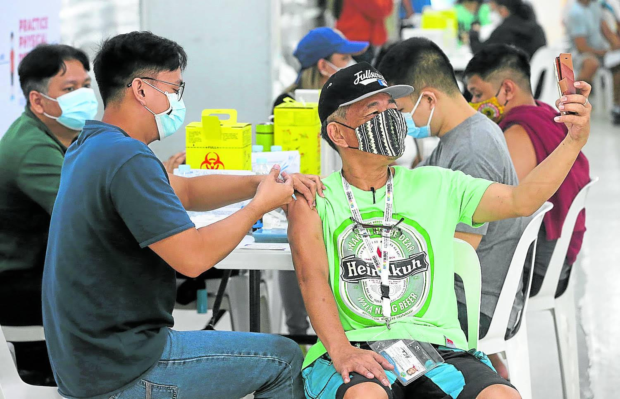 A Marikina resident takes a selfie while getting a booster shot. NIÑO JESUS ORBETA/FILE PHOTO

MANILA, Philippines — The seven-day positivity rate in the National Capital Region (NCR) has slightly increased to 18.9 percent as of Sept. 28 from the 17.5 percent on Sept. 21, the independent analytics group OCTA Research said on Friday.

“In the National Capital Region (NCR), we see that the positivity rate is very high,” Prof. Ranjit Rye said at the televised Laging Handa briefing, adding that Metro Manila is now at moderate risk classification.

Rye also said that COVID-19 cases in Central Luzon and in the Calabarzon (Cavite, Laguna, Batangas, Rizal, Quezon) region were also rising but he did not provide details.

Based on data from OCTA Research, the COVID-19 healthcare utilization rate in Metro Manila has remained low at 35 percent as of Tuesday, down from 38 percent on Sept. 21.

OCTA said the average daily attack rate in NCR was 7.42 per day per 10,000 population as of Sept. 29, which the group considered as “moderate.”

It also said that the ICU (intensive care unit) occupancy also has remained low at 29 percent.

Rye said the rise in COVID-19 cases in Metro Manila could be due to the increased mobility because of the resumption of in-person classes and the the presence of more contagious variants.

He also said that many individuals were no longer complying with the COVID-19 health protocols.

“People have to be careful over the next week or so,” he said.

To prevent continued surge in virus cases, Rye urged the public to still follow the minimum public health standards and get vaccinated, including taking booster shots.

“Although we no longer have a mask mandate, it is important that we wear masks outside during this period, because our cases are increasing,” he said.

While they are still gathering more “conclusive data,” Rye said the voluntary wearing of masks outdoors had an “impact” on the rising number of COVID-19 cases.

On Thursday, the Department of Health (DOH) announced that NCR has been classified as moderate risk following the increase in COVID-19 cases.

Maria Rosario Vergeire, officer in charge of the DOH, said 13 out of the 17 areas in NCR recorded sustained increases in COVID-19 infections.

Vergeire on Friday blamed “pandemic fatigue” for the dismal turnout of the government’s special vaccination drive this week, which barely hit targets at 5.7 percent with only one more day left.

In a press briefing, she said only 109,000 individuals of the 1.9 million eligible individuals had received their first booster shots since the special vaccination days began on Monday.

“Just like in any other part of the world, people have moved on. People have, in their minds, pandemic fatigue,” Vergeire said when asked about the accomplishment rate.

Citing surveys conducted by the DOH, she said that people who were jabbed with primary doses and those who already got infected with COVID-19 remained “confident” that natural immunity and the first two shots would provide them sufficient protection even without booster shots. INQ