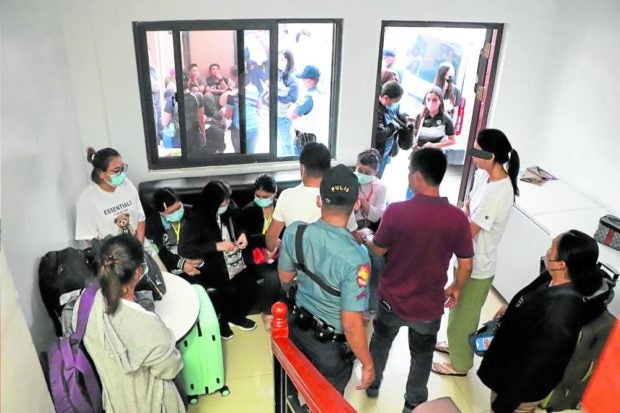 FORCED TO SCAM OTHERS Police officers from the Women and Children Protection Center assist some of the 29 victims—23 Burmese and six Chinese—of alleged human trafficking who were forced to work as scammers for an online gaming operator. They were rescued on Thursday from their Parañaque City dormitory. —PNP-PIO PHOTO

Police Maj. Gen. Eliseo Cruz, chief of the Directorate for Investigation and Detective Management, said they were the latest victims rescued from gaming operators in the country.

He said that since 2017, a year after online gaming boomed in the country, the Philippine National Police has rescued 4,453 mostly Chinese victims of human trafficking in 1,312 operations that resulted in the arrest of 1,330 suspected traffickers. The victims also included Taiwanese, Burmese, Malaysian and Thais.

Police Col. Ericson Dilag, deputy director for operation of the PNP Anti-Kidnapping Group (AKG), warned that the human trafficking crimes would be a “bigger problem” than the kidnapping and serious illegal detention cases involving Pogos.

According to the AKG, a total of 17 Pogo-related kidnappings were recorded as of September, which surpassed the 12 recorded from January to December last year.

Filipino-Chinese community leader Teresita Ang See said the illegal recruits for Pogos among Chinese mainlanders were already in the “thousands,” with the transactions happening mostly on social media platforms.

In the first rescue at Barangay Alabang in Muntinlupa City on Wednesday, officers from the Southern Police District and Malaysian Royal Police saved a Malaysian and 33 other foreigners who were allegedly forced to work at Dexin 999, a Pogo service provider.

Their Chinese employer, Qian Jing, was arrested and would be facing charges of serious illegal detention.

Dexin is accredited by the Philippine Amusement and Gaming Corp. (Pagcor), the government gaming regulator, but was unable to show a business permit.

The 25-year-old Malaysian, Soh Teck Koung, told police that he started work in June 2021. Two months later, however, his employer stopped paying his salary, refused to allow him to leave the building and threatened to report him to Filipino authorities for working without a permit.

On Sept. 26, he managed to call his mother in Malaysia and she reported his ordeal to Malaysian authorities.

On Thursday, officers from the PNP Women and Children Protection Center rescued 29 more—23 Burmese and six Chinese nationals—at their dormitory in Concorde Village, Barangay Tambo in Parañaque City. No one was arrested.

They were all employees of MOA Cloudzone Corp. based at NexGen Tower in Pasay City, which is one of the 127 Pogo service providers accredited by Pagcor.

Cruz said two Burmese nationals—a man and woman—who were previously employed by MOA Cloudzone told police after they were rescued a week earlier that they had a relative still working for the company along with other foreigners who were “being forced and exploited to work as online scammers.”

According to the two, they were traveling as tourists in Dubai in January when their compatriot, known only as “Christine,” sent them a message telling them that she owned two companies in the Philippines and asked them to work for her as customer service representatives.

The pair arrived in Manila on March 28 and met Christine at the billeting building in Barangay Tambo where their passports were taken.

Cruz said the two worked for Oriental Group of Company in Palace Plaza, Pasay City and promised a monthly salary of P60,000.“They worked by chatting with potential clients by encouraging them to play and invest money online which for them is a form of online scamming,” he said.

The victims were only paid for their work in May, but not for April. They were required to work 14 hours a day with no holiday leaves.

When they told Christine they wanted to resign and return to Myanmar, they were each told to pay P550,000 before they could go. They were eventually transferred to MOA Cloudzone, “and worked with the same scheme of scamming people online,” the police said.

Cruz said they were locked in a room, beaten and electrocuted with an electric taser with no food and water since they no longer want to work and do not have the capability to pay for their release.

On Aug. 23, they were transferred to a condominium in Pasay City where they were locked up for two days.

They were locked in separate rooms for three days with no food, only water and forced to sign a work contract which also indicated that they obtained a loan of P3.49 million from Christine.

They were forced to work again as online scammers until Sept. 22, when they were rescued, Cruz said.

He said their employer and at least three companies were already identified by the victims and would be sought by the police.

Pagcor said foreigners arrested recently for illegal online gambling “are not in any way related to legitimate” Pogos or companies accredited to operate as such.

Alejandro Tengco, Pagcor chair and chief executive, said in a statement on Friday that any individual, group or entity which conducts online gambling without Pagcor approval should not be referred to as Pogo.

“Pogo operations are strictly being monitored by [Pagcor], and any gaming entity that fails to pass the application process for an offshore gaming license and to fulfill the documentary and financial requirements, among others, cannot be labeled as legal offshore gaming operators, or Pogo,” Tengco said.

He added that Pagcor was closely coordinating with various agencies—such as the Department of the Interior and Local Government, Department of Justice, the PNP and the National Bureau of Investigation “to effectively determine any illegal offshore gaming operations in the country and thwart kidnapping and human trafficking incidents.” —WITH REPORTS FROM RONNEL W. DOMINGO, ANGEL YABUT AND ABBY BOISER INQ

Salceda lauds SC ruling on POGO taxes: It affirms the law that we crafted