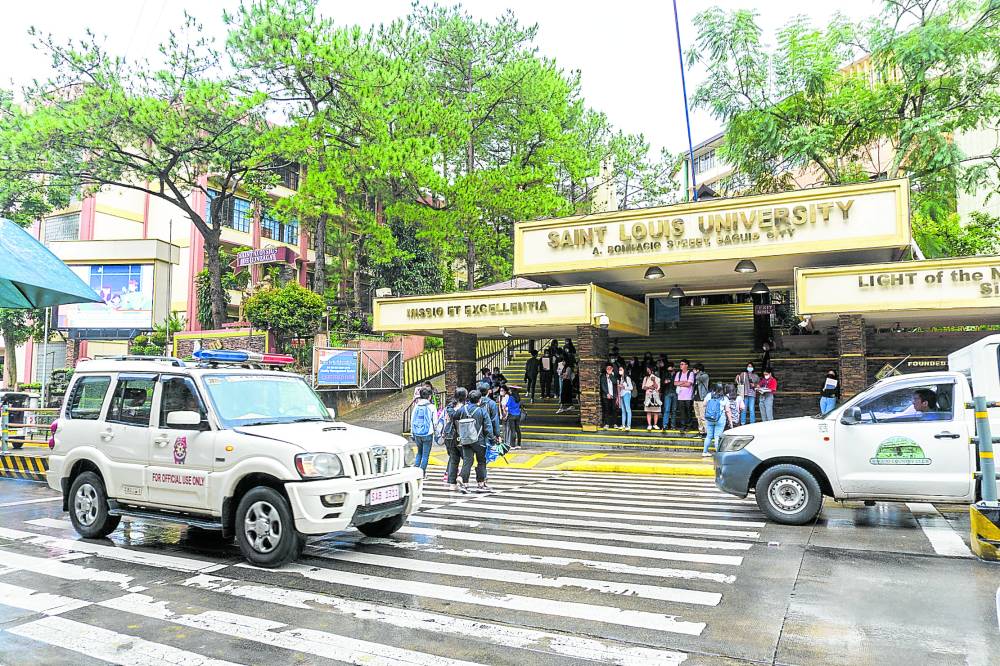 POLICE VISIBILITY A patrol car passes by the main gate of Saint Louis University in Baguio City on Thursday as the police intensify its security monitoring in local schools, including the University of the Philippines Baguio, due to the recent red-tagging of students. —NEIL CLARK ONGCHANGCO

BAGUIO CITY — The city council will investigate the latest attacks on university students who received text messages from an unidentified group that threatened to inflict harm on youth activists in Baguio.

Since Tuesday, the local police have intensified the security around the campuses of the University of the Philippines (UP) Baguio and Saint Louis University (SLU), saying they were taking such threats seriously.

The student councils of the two universities said some of their student leaders received text messages on Tuesday from an anonymous sender accusing them of “fighting the government.”

“Dapat lang sa inyo may masaktan, may masampolan (Someone needs to get hurt so as to set an example),” according to one of the text messages that student activists shared with the Inquirer.

“Wala kayo ginawa kundi labanan ang gobyerno. Mga studyante (sic) kayo gobyerno nagpapaaral sa inyo pero kinakalaban niyo sila. SLU at UP di malaman kung ano gusto at pinaglalaban … Inisip namin dati na bata pa kayo marami pa kayong di alam at matotu pa (sic) kayo … (All you do is oppose the government. The government pays for your education but you have been fighting it. Students of SLU and UP do not even know what they want nor what they are fighting for … We used to believe you were just children who did not know better and could still learn),” the message said.

“May dudugo. Binalaan namin kayo. Simula ng alasyete (sic) ng umaga (Someone will bleed. We have warned you. It begins at 7 in the morning),” it added.

The threatening message similarly warned the students that the group had “infiltrated” the campuses to supposedly sow terror. Nothing untoward had been reported in these universities as of Thursday.

In an interview on Thursday, Councilor Jose Molintas, a human rights lawyer, said the council’s investigation into the incident would ensure that the students would be protected from Red-tagging and all forms of harassment as promised by Mayor Benjamin Magalong last year.

Molintas, who chairs the committee on public order and safety, said the council’s move would be “guided by jurisprudence that has already ruled that Red-tagging is wrong.”

He cited the Sept. 21 ruling of Manila Regional Trial Court Judge Marlo Magdoza-Malagar that junked a government petition to officially declare the New People’s Army, the Communist Party of the Philippines, the National Democratic Front of the Philippines, and the groups’ supporters as terrorists.

At UP Baguio, a crisis management committee has been activated to address the threats received by its students, said Prof. Cecilia Fe Sta. Maria-Abalos, who heads its Public Information and Publications Office.

The University Student Council at UP Baguio condemned the threats, describing the criticism of activists as “malicious labeling.”

“As a university, we encourage our students to engage in the discourse on social justice to serve as catalysts for change,” it said in a statement on Tuesday. “As a democratic society, we should be open to varied perspectives and seek solutions to achieve inclusive development.”

The SLU Supreme Student Council also condemned what it described as a “crackdown against progressive youth.”

“These acts of fascism must end now. We are one in the call to defend democracy and uphold our human rights,” it said.