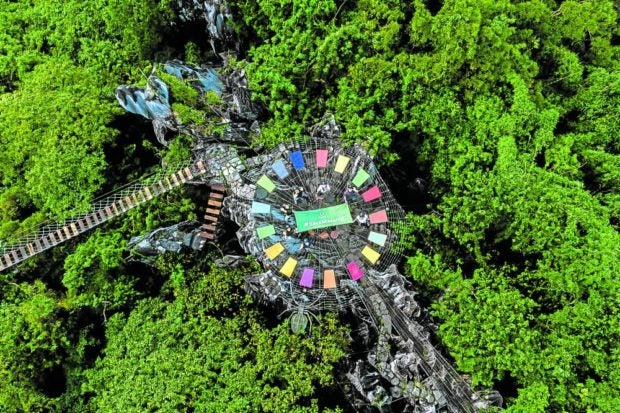 WORTH THE SACRIFICE Masungi Georeserve Foundation (MGF) staff members celebrate the latest global recognition they have earned at the geopark’s weblike observation post. The colors represent the 17 United Nations Sustainable Development Goals that bind countries to work for peace and prosperity. —MGF PHOTO

MANILA, Philippines — Amid the many challenges it faces, including recent concerns caused by the presence of armed men in the area it is tasked to protect, the Masungi Georeserve Foundation (MGF) won an award from the United Nations for its efforts to restore and safeguard a 2,100-hectare rainforest in Rizal province and inspire the youth to “flip the script” for climate action.

The SDGs, a total of 17 interlinked global targets serving as a “shared blueprint for peace and prosperity for people and the planet, now and into the future,” were set up in 2015 by the UN General Assembly. Intended to be achieved by 2030, the SDGs are an urgent call for action by all countries to recognize that ending poverty and other deprivations must go hand-in-hand with strategies that improve health and education, reduce inequality, and spur economic growth—all while tackling climate change and working to preserve the oceans and forests.

The UN SDG Action Award honors changemakers and initiatives that drive transformative action around the world. Its 2022 edition received more than 3,000 applications from over 150 countries in three categories—Mobilize, Inspire and Connect—and a separate award recognizing changemakers. The Masungi project won in the Inspire category.

For the park rangers

In her acceptance speech, Billie dedicated the UN recognition to the park rangers of Masungi, the foundation’s allies, partners and the people of the community who helped the project endure, but added that their work “continues to be undermined and undersupported in our home country.”

She also dedicated the award to the “quarrying companies, land grabbers and their enablers in the government” that she pledged to challenge during her speech.

“To the people who have said we are dreaming too big, that this is the way things have always been, and that we are pushing too far, this is for you,” Billie stressed, earning a round of applause from the audience. “This is a reminder that we will not stop.” 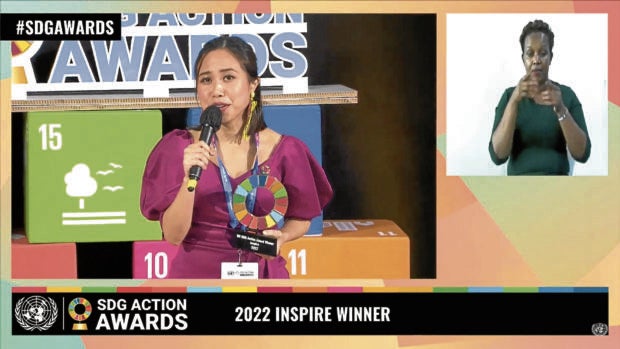 ‘A REMINDER THAT WE WILL NOT STOP’ | Billie Dumaliang, a trustee and cofounder of Masungi Georeserve Foundation, receives the UN Sustainable Development Goals Action Award in Bonn, Germany, on Tuesday. (Screenshot from a video on the UN YouTube channel)

The UN SDG Action Award was the 10th that MGF had received from international organizations for its reforestation efforts.

Describing Masungi’s efforts as inspiring, the SDG awards cited how they helped shape Philippine policies that led to three legislative inquiries and issuances of 80 cease-and-desist orders in the watershed.

“Youth [have] been the catalyst for the Masungi Geopark’s accomplishments and make up the core team of the managing trustees, truly showing how they can flip the script for climate action, conservation and tourism,” according to the material on Masungi posted on the UN SDG website.

It pointed out that only 3 percent of the primary forests remained in the Philippines due to rampant deforestation and poor environmental enforcement.

“The Masungi Georeserve east of Manila is a microcosm of these problems in a highly sensitive karst (a topography formed from the dissolution of soluble rocks) landscape which serves as a natural filter for vital waterways. The surrounding watershed is threatened by land trafficking and other illegal activities, exacerbated by corruption. This leads to the reduction of the clean water supply for about 40,000 people whilst increasing flood risks,” it said.

Through an agreement signed with the government in 2017, through the Department of Environment and Natural Resources then under Environment Secretary Gina Lopez, “the Masungi Georeserve became one of the biggest collaborative reforestation efforts in the country using self-generated funds from geotourism,’’ it recalled, adding:

“Over 2,000 hectares of land has been rescued, 17 ranger stations and 18 kilometers of monitoring trails established, 100 rangers and 200 partners engaged and over 200 households have been supported. Sixty-eight thousand native trees have been planted and nurtured.”

The latest award came nine days after the foundation alerted the public about the presence of more than 30 armed men in its area of jurisdiction. Posting pictures of the group on social media on Sept. 18, MGF alleged that they had set up camp along Kilometer 48 of the Marikina Infanta Highway and appeared poised to illegally occupy a part of the nature preserve.

The local police the following day seized about a dozen firearms from the men, who were identified as personnel of Sinagtala Security Agency. But no arrests were made and the men were fined only P1,000 each for not bringing their gun licenses with them.

The men were gone by the time Interior Secretary Benhur Abalos, along with ranking police and environment officials, inspected Masungi on Sept. 23.

Also last week, in another troubling development for MGF, the DENR announced plans to review its 2017 agreement with the foundation, along with accords with other private organizations assigned to look after protected areas.