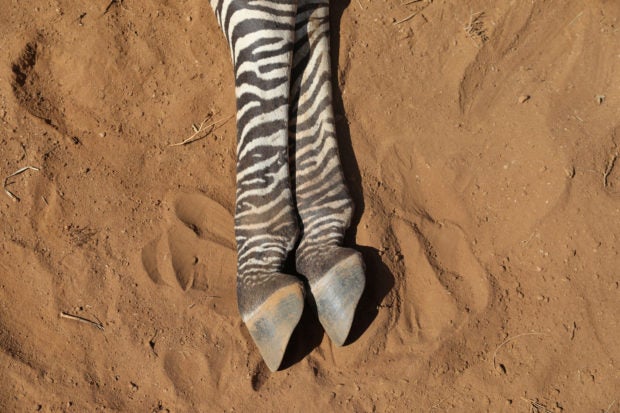 The carcass of an endangered Grevy’s Zebra, which died during the drought, is seen in the Samburu national park, Kenya, September 20, 2022. REUTERS FILE PHOTO

NAIROBI — Kenya’s worst drought in four decades has killed almost 2% of the world’s rarest zebra in three months, and 25 times more elephants than normal over the same period.

It is starving Kenya’s famed wildlife of normal food sources out in the open and driving them into deadly conflict with people as they roam wider, to the edges of towns and villages, in a desperate search for sustenance.

Without interventions to protect wildlife, or if the approaching rainy season fails again, animals in many parts of the East African country could face an existential crisis, conservationists say.

“It’s a serious threat to us,” said Andrew Letura, a monitoring officer at Grevy’s Zebra Trust (GZT). Grevy’s zebra, which are larger than a standard plains zebra and have narrower stripes and wider ears, are the rarest in the species: there are 3,000 left in the world, 2,500 of which are in Kenya.

Drought has killed about 40 Grevy’s since June – which is how many would be expected to die over a whole year, said Letura, squinting under the searing sun at Samburu National Reserve in Kenya’s arid north.

“If we are losing 40 within three months, what would that mean to the remaining population?”

GZT has begun to feed Grevy’s zebras hay poured over a mix of molasses, salt and calcium, helping to reduce but not eliminate deaths, the trust says.

The situation in southern Kenya is also bleak.

“Rangers have counted eight times as many animals dead or too weak to stand, compared to a normal September. The Amboseli Trust for Elephants have recorded 50 elephants dead or missing,” said Benson Leyian, chief executive of Big Life Foundation which works with local landowners to protect conservation areas and open rangelands of the Amboseli Ecosystem.

In the Kitenden Conservancy nearby, the stench of rotting animal carcasses is so strong that some tourists have started to wear protective masks, a ranger there said.

Some wild animals are dying at the hands of people.

“We’re seeing a five-fold increase in incidents of people poaching for bushmeat, as compared to other dry seasons,” said Leyian.

Save the Elephants, meanwhile, said it is finding a growing number of elephants killed by guns or spears, but with their tusks intact – a sign that they fell victim to conflict with humans in populated areas, rather than to poaching.

The crisis isn’t attributable to drought alone, experts say. Overgrazing by livestock is depleting rangelands and making it harder for ecosystems to recover from drought, said David Daballen, field operations chief for Save the Elephants.

Even thinking about the possibility of the next rains, which are expected in October-November, failing is frightening, said Letura of GZT. “The situation is already bad. But that would make it a serious crisis,” he said.

“The first words anyone says now is that they are praying for rain.”

Millions hungry but drought overlooked as Kenya prepares to vote