With over 200 average deaths yearly, PH far from rabies-free status 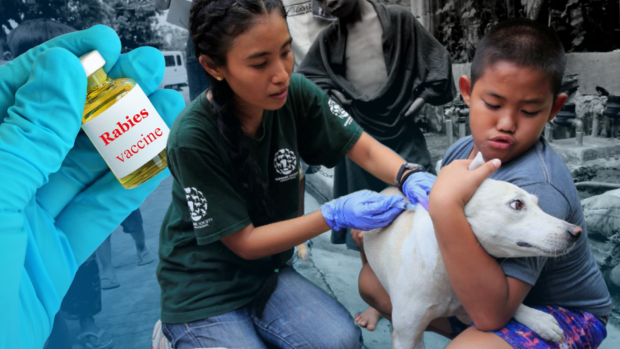 MANILA, Philippines—With “high risk” classification, rabies is still one of the most prevalent threats to public health in the Philippines, the Research Institute for Tropical Medicine (RITM) said.

The United States Centers for Disease Control and Prevention (CDC) stressed that rabies ends a person’s life every minute. Most of the deaths happen in Asia and Africa, where children 15 years old and below comprise more than half of the deaths.

The Department of Health (DOH) said that in the Philippines, an average of 200 to 300 individuals die yearly because of rabies, a viral disease that attacks the central nervous system.

According to the CDC, while rabies is a 100 percent preventable disease, almost 60,000 people die from it all over the world yearly, the reason that it stressed the need to “reflect on how rabies impacts your community.”

Looking back, it was in 1999 when then President Joseph Estrada signed Executive Order No. 84 to declare March of every year as Rabies Awareness Month, saying that rabies, if not eradicated, will greatly affect the public health and safety of Filipinos.

But all over the world, a health observance, which started in 2007, is likewise commemorated every Sept. 28—the World Rabies Day, which the CDC said is a chance to raise awareness regarding the world’s deadliest infectious disease.

The RITM said that rabies is transmitted to a person through the bite of an infected animal, mostly those warm blooded, although dogs account for most of the reported rabies cases.

“Once a person is bitten by a rabid animal and the victim was not vaccinated, the rabies virus will travel from the site of the bite to the victim’s brain. As it reaches the human nervous system, it becomes 100 percent fatal,” it said.

This, the RITM said, is because although extensive research has been done on rabies, “scientists have not yet developed a cure once the virus reaches the human nervous system.” 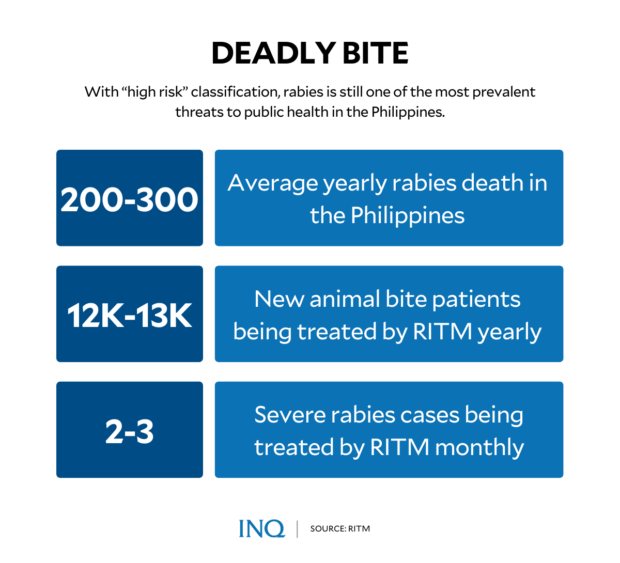 As the rabies virus goes on a death crawl to the brain, the victim will feel the initial symptoms such as a high temperature of 38ºC, chills, fatigue, irritability, anxiety, and vomiting.

After two to 10 days, more severe symptoms will start to manifest, including aggressive behavior such as biting, excessive salivation, hallucination, hydrophobia, aerophobia, and muscle spasm.

The RITM, which also serves as a referral center for rabies and animal bite management, said that it treats 12,000 to 13,000 new animal bite patients yearly and two to three severe rabies cases every month.

This was the reason that in 2007, the government passed Republic Act No. 9482 or the Anti-Rabies Act, a law that calls for the control and elimination of rabies in the Philippines.

It mandated the creation of the National Rabies Prevention and Control Program, a multi-agency/multi-sector initiative that seeks to eliminate human rabies by 2016, and declare a rabies-free Philippines by 2020.

These were the main components of the program, as stressed by the RITM:

RELATED STORY: 6 dead due to rabies in Bicol – DOH

However, only last Sept. 8, the DOH said that the Philippines had three more rabies deaths between Aug. 14 to 20, bringing the total fatalities to 233 this year, 19 percent higher than the 195 rabies deaths in the same period last year.

It was revealed that most of the new cases came from Calabarzon, Mimaropa and Metro Manila, and that this year’s victims, the DOH stressed, were individuals three to 87 years old. 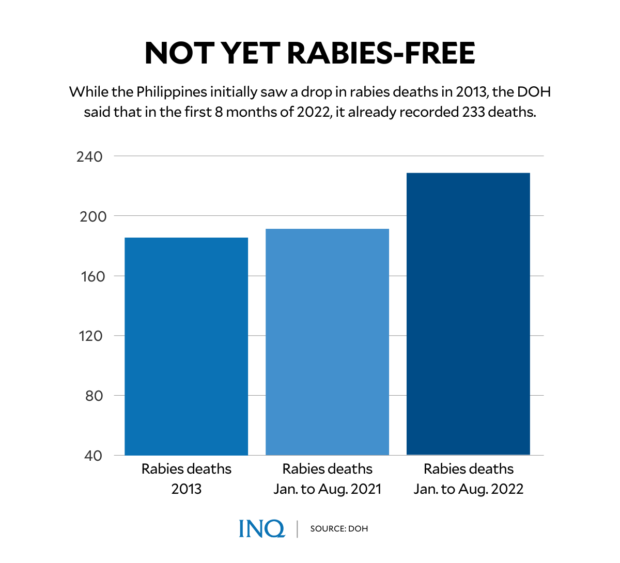 Back in June, there were only 157 rabies deaths, which was five percent lower compared to the reported cases in the same period last year.

“Rabies has a 100% fatality rate, which is why joint actions among the DOH, Department of Agriculture, local governments, and local veterinarians are important to prevent the spread of the virus.”

Based on a SciDev.Net article, a new research suggested that “the Philippines’ inadequate measures to control rabies led to its failure to reduce the incidence of the deadly viral disease transmitted mainly through the bite of dogs and other animals.”

Published in PLOS Neglected Tropical Diseases, researchers led by Ferdinand de Guzman looked at cases of rabies from 2006 to 2015 admitted at the San Lazaro Hospital in Manila.

De Guzman told SciDev.Net that “in the Philippines the focus is on the management of bites rather than on prevention of canine rabies through dog immunization programmes.”

“Achieving the goal of the global strategic plan, namely ‘Zero by 30’ [an international plan to end death of humans due to “dog-mediated” rabies by 2030], requires strengthening the control programme based on scientific analysis.”

SciDev.Net stated that research carried out in countries such as Brazil has shown declining trends in human rabies cases due to rabies control programs, especially mass animal vaccination.

“To improve the rabies situation in the Philippines, the researchers recommended vigilant evaluation of rabies vaccine coverage for pet dogs and the reinforcement of control strategies in regions where rabies cases are rampant.”

The RITM said dogs transmit 99 percent of cases of recorded rabies deaths. It is estimated that 59,000 human deaths occur annually worldwide because of rabies.

It stressed that the present yearly average of deaths because of rabies in the country is 231, putting us behind in the goal of achieving a rabies-free Philippines.

The World Organization for Animal Health said that mass animal vaccinations and 70 percent vaccine coverage of the at-risk dog population are the most effective methods to control rabies.

If local dog population data is unavailable, such as in the case of the Philippines, they are estimated using the 1:10 dog to human ratio.