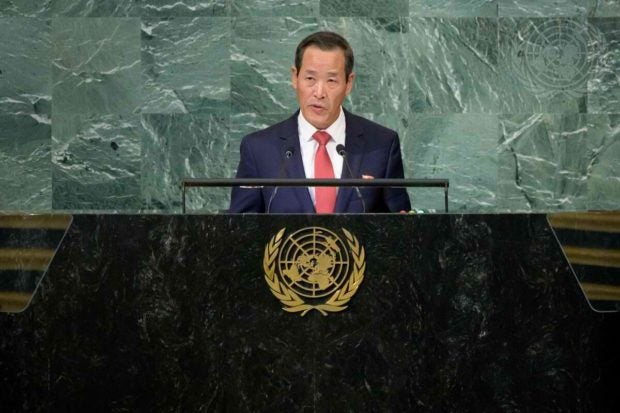 Kim Song, Permanent Representative of the Democratic People’s Republic of Korea to the United Nations, addresses the general debate of the General Assembly’s seventy-seventh session. (UN Photo via The Korea Herald/Asia News Network)

SEOUL — North Korea claimed Monday that the United States compelled the country to adopt a first-use nuclear doctrine and vowed to continue military buildup in a tit-for-tat move against the US’ “hostile policy.”

At the UN General Assembly, the claim was immediately dismissed by South Korea, but North Korea repeatedly clarified that it no longer seeks to discuss Korean Peninsula affairs with the Yoon Suk-yeol government.

North Korean Ambassador to the United Nations Kim Song underscored the legitimacy of the country’s nuclear expansion in his speech at the UN General Assembly in New York.

Kim claimed that the “growing hostility of the US and its following forces” against North Korea has put the security environment of the Korean Peninsula into a vicious cycle of tension and confrontation. Notably, Kim did not make any direct reference to South Korea in his 18-minute speech.

The ambassador cited the US’ combined military exercises with its allies and like-minded countries in and around the Korean Peninsula as one of the reasons for bolstering its military and nuclear capabilities.

“Obviously, this is an extremely dangerous act of igniting the fuse to drive the situation on the Korean Peninsula to the brink of war,” Kim said, according to an official translation.

“The DPRK has found another correct answer to defending its sovereignty and fundamental interests from the persistent hostile policy and military threat of the United States and its following forces and to ensuring peace and security on the Korean Peninsula and in the region,” the North Korean ambassador added, using the acronym for the North’s official name, the Democratic People’s Republic of Korea.

“The US compelled the DPRK to adopt a law on the policy of nuclear forces in defiance of the US’ hostility,” Kim argued, suggesting that the country will adhere to the principle of strength-for-strength.

“In direct proportion to the increase of the hostile policy and military blackmail by the United States against us, our strength is bound to be built up continuously to contain them.”

“To put it clearly, we have never recognized such resolutions of the United Nations that impose pressure because we do not abide by its rules, made unilaterally by the US,” Kim said. “We will also not accept them in the future.”

In his speech, Kim In-chol also repeatedly and harshly criticized the “rules-based international order.” This world order, which has been openly challenged by China and Russia, has been the core of the Biden administration’s foreign policy.

“Their nuclear and ballistic missile programs are not only unlawful, but are posing a serious threat to the peace and stability in the region and beyond,” South Korea’s Deputy Permanent Representative to the UN Bae Jong-in said, exercising the right of reply.

Bae pointed out that North Korea has launched a total of 32 ballistic missiles this year.

“Any attempt by the DPRK to justify its position and potential use of nuclear weapons, including the adoption of the new nuclear force law on Sept. 8 will not be recognized by the international community under any circumstances.”

Bae underscored that South Korea cannot agree with North Korea’s claim that its development of nuclear weapons and missiles was inevitable.

“It is a choice that cannot be justified,” Bae said. “We cannot agree that compliance with UN Security Council resolutions is a matter of choice. It is a legal obligation.”

Bae also underlined that the South Korea-US alliance’s efforts to maintain a combined defense and deterrence posture including combined military exercises are “in response to such military threats from the DPRK.”

“These defensive measures are a duty of a responsible government at the least.”

In return, Kim In-chol, first secretary at the North Korean mission to the UN, dismissed Bae’s remarks as “baseless and provocative” by exercising the right of reply at the UN General Assembly.

The delegate vehemently underscored that North Korea does not consider South Korea as a dialogue partner, and that it seeks to shun South Korea.

“We would like to emphasize that we are not dealing with South Korea in terms of the Korean Peninsula situation,” Kim In-chol said. “South Korea is now at the forefront of the hostility of the US against the DPRK.”