Karding leaves P186.5 million worth of damage to Quezon’s crops 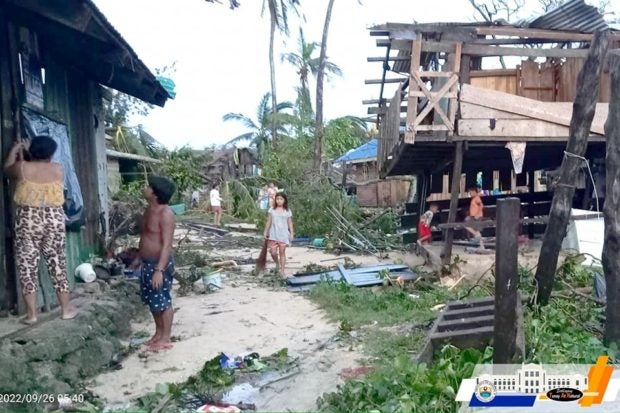 It enumerated that around 1,433 hectares of rice lands were destroyed, and 1,490 hectares were damaged by the typhoon that cut across the province on Sunday, September 25. It affected 3,181 rice farmers.

The estimated cost of ravaged rice lands, most of which were almost ready for harvest, reached P119.4 million.

Some P30.2 million fruit-bearing trees covering 2,373 hectares were likewise damaged by the typhoon, affecting 3,076 farmers, while about 27,640 hectares of coconut trees worth P25.8 million were lost, affecting 9,213 coconut farmers.

According to the Provincial Disaster Risk Reduction and Management Office (PDRRMO), a total of 13,97 families composed of 50,435 individuals were displaced by the severe weather event’s wrath.

At least 8,619 families or 31,701 individuals are from the province’s 1st district, including the five island towns in northern Quezon facing the Pacific Ocean: Polillo, Burdeos, Panukulan, Jomalig, and Patnanungan.

The PDRRMO said 972 houses across the province were destroyed and 3,932 were damaged.

On Tuesday afternoon, Vice Gov. Anacleto III said the provincial council, acting on the letter by Gov. Angelina Tan, has declared a state of calamity in the island towns of Polillo, Burdeos, Panukulan, Patnanungan, Jomalig and the municipality of General Nakar.

READ: More parts of Luzon placed under Signal no. 5 due to Karding

The declaration of the state of calamity will hasten the rescue and relief and rehabilitation efforts of the government and the private sector in the said areas which were severely hit by the typhoon.

The move will also be an effective mechanism to control the prices of goods and commodities in the areas.