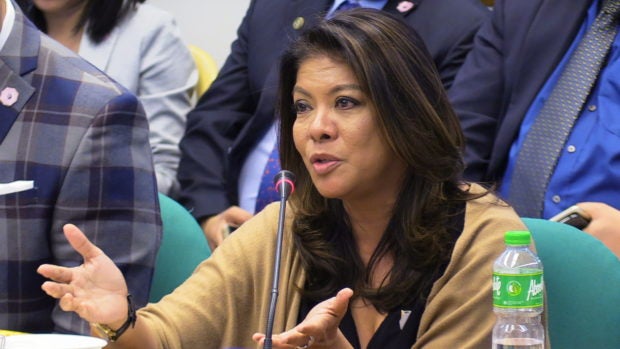 According to Nueva Vizcaya Rep. Luisa Cuaresma on Tuesday, sponsor of the proposed 2023 budget of the Department of Interior and Local Government (DILG), as Kabataan Rep. Raoul Manuel raised questions about the PNP’s action on Badoy’s behavior.

In a now-deleted social media post, Badoy asked people to be lenient with her if she kills the Manila judge out of her political beliefs as the lower court junked the government’s bid to tag the Communist Party of the Philippines and New People’s Army as terrorist groups. Badoy was a spokesperson of the National Task Force to End Local Communist Armed Conflict (NTF-Elcac) during the previous administration.

Manuel pointed out during budget deliberations the alleged disparity in the response of government authorities on the case of Badoy and Ronnel Mas, the teacher who issued a remark placing P50 million on former president Rodrigo Duterte’s head.

According to the party-list lawmaker, state forces seemed to have acted quickly against Mas and not so on Badoy when both committed “similar action.”

“Now, I raised this, Mr. Speaker, because our previous spokesperson of the NTF-Elcac, Lorraine Badoy Partosa, has made a similar action and we want to know if the police have any intention to arrest her because she also placed the safety and security of a Manila judge’s life in peril,” Manuel said.

“She also explained in the other parts of her post why she thinks that way, but Mr. Speaker, this is very dangerous. Now, will the Philippine National Police be able to respond to this? What are their actions regarding this?” he then asked.

In response, Cuaresma said that police officers would follow procedures – that if an arrest order is issued against a person, it will be enforced.

But Manuel stressed there are serious sanctions and penalties for people making bomb jokes and Badoy also made remarks about bombing offices of allegedly corrupt judges.

“Mr. Speaker, in our country, we do not take lightly bomb jokes – that’s why if you [make] a bomb joke, even if that’s a joke, law enforcement agencies can arrest you,” he said.

“Mr. Speaker, aside from the death threat, Ms. Lorraine Badoy Partosa also said that ‘I really really want to build an organization with a noble ideal of establishing a justice system that is free from the infiltration of the terrorist vermin then members of my organization will start bombing the offices of these corrupt judges who are friends of terrorists even if they kneel before us and beg for their lives.’ Do our law enforcement agencies have a comment on this?” he then asked.

Cuaresma said the DILG and PNP assured her that Badoy would be probed.

“Mr. Speaker and your Honor, the policemen will investigate Mr. Speaker and we will submit to – will give a copy to the Honorable Raoul Manuel as to the result of the investigation that shall be conducted by our PNP, Mr. Speaker,” she said.

Badoy had been embroiled in controversies over her statements linking people to the communist movement. Last July, Badoy and other NTF-Elcac officials were ordered to answer graft complaints filed against them for engaging in red-tagging.

READ: Karapatan urges Ombudsman Martires to act on its complaint vs NTF-Elcac execs

In June, doctors asked the Professional Regulation Commission to suspend or revoke Badoy’s medical license after she red-tagged a group of health workers who had aired grievances about their working conditions amid the COVID-19 pandemic. With reports from Alyssa Joy Quevedo, trainee