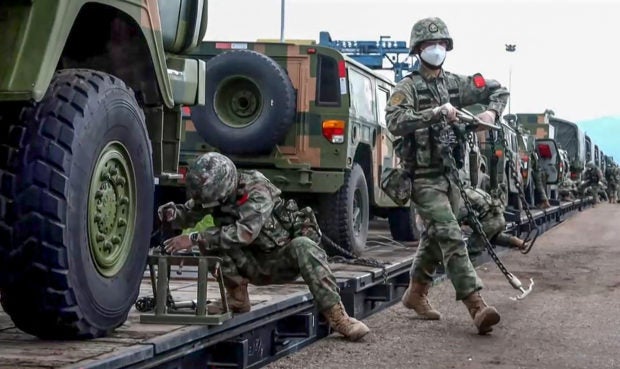 This screen grab obtained from a handout video released by the Russian Defence Ministry on August 29, 2022, shows a Chinese armed convoy upon their arrival for ‘Vostok-2022’ military exercises at the Sergeevsky training ground at Primorskiy (Maritime) Kray of the Russian Far East. AFP

KYIV — Russia on Saturday toughened penalties for soldiers voluntarily surrendering or refusing to fight, with up to 10 years imprisonment, and it replaced its top logistics general after a series of setbacks to its seven-month war in Ukraine.

Those developments come days after Russia instigated a partial mobilization affecting up to 300,000 additional troops, at a time when Kyiv has taken back more and more territory in a stunning counter-offensive.

Seemingly in response to the new Russian penalties, Ukrainian President Volodymyr Zelensky directly addressed Russian citizens on Saturday, telling them that their president was knowingly “sending citizens to their death.”

Speaking in Russian, he called on Moscow’s forces to surrender, saying, “You will be treated in a civilized manner… No one will know the circumstances of your surrendering.”

His pointed remarks came as Kremlin-held regions of eastern and southern Ukraine voted for a second day on whether to become part of Russia, dramatically raising the stakes in the conflict.

Integrating the four regions into Russia would mean that Moscow would consider any military move there as an attack on its own territory.

Zelensky has denounced the polls, on Friday calling them “crimes against international law and the law of Ukraine”.

Ukraine’s recent gains have laid bare flaws in Russia’s approach since it invaded on February 24, with some analysts seeing logistics as the weak link in Moscow’s army.

“Army General Dmitry Bulgakov has been relieved of the post of deputy minister of defense” and will be replaced by Colonel General Mikhail Mizintsev, aged 60, the defence ministry said.

Russia’s partial mobilization, announced on Wednesday, will likely be one of Mizintsev’s first big logistical challenges, with the hundreds of thousands of reservists being called up needing equipment and training before deployment.

Military-age men have sought to leave, with flights full and neighbouring countries receiving an influx of Russians. Some 2,300 private vehicles were waiting at one crossing into Georgia, regional Russian authorities said.

“We were talking to our friends and many are thinking about leaving,” said Daria, 22, after fleeing Russia to Istanbul with many of her compatriots.

“Not everyone wanted to leave in February. The (mobilization) decision of September 21 forced many to think about it again.”

More than 700 people were detained in protests on Saturday against the partial mobilization, according to independent monitoring group OVD-Info.

Now that President Vladimir Putin has signed the legislation, servicemen who desert, surrender “without authorisation”, refuse to fight or disobey orders can face up to 10 years imprisonment.

Looting will be punishable by 15 years imprisonment.

A separate law, also signed on Saturday, facilitates Russian citizenship for foreigners who enlist in the Russian army as the Kremlin seeks to bolster the ranks.

On Friday, US President Joe Biden dismissed as a “sham” the voting on whether Russia should annex four regions of Ukraine.

And in remarks at the UN General Assembly in New York, even Beijing, Moscow’s closest ally since the war began, called on Russia and Ukraine not to let the effects of the war “spill over”.

In his own address to the UN on Saturday, Russian Foreign Minister Sergei Lavrov bitterly criticized Western nations, saying the United States and its allies sought to “destroy” his country.

“The official Russophobia in the West is unprecedented. Now the scope is grotesque,” he said.

He also defended the referendums, describing them as people claiming land “where their ancestors have been living for hundreds of years.”

The voting is being held in Russian-controlled areas of Donetsk and Lugansk in the east, and Kherson and Zaporizhzhia in the south.

Authorities there are going door-to-door to collect votes.

Polling stations then open Tuesday for residents to cast ballots on the final day of voting. Results are expected as early as late Tuesday.

“Ultimately, things are moving towards the restoration of the Soviet Union. The referendum is one step towards this,” Leonid, a 59-year-old military official, told AFP.

The snap referendums were announced just this week after the Ukrainian counter-offensive seized most of the northeast Kharkiv region — bringing hundreds of settlements back under Kyiv’s control after months of Russian occupation.

On Saturday, bad weather and stiff Russian resistance caused Ukraine’s counter-offensive to slow to a brutal slog in Kupiansk, in the eastern Kharkiv region.

“For now, the rain is making it difficult to use heavy weapons everywhere. We can only use paved roads,” Ukrainian army sergeant Roman Malyna told AFP.

Irpin, close to the capital, was recaptured after weeks of fighting and residents have rallied to start rebuilding before winter sets in.

More than 100 apartment blocks in Irpin — dubbed a “hero city” by Zelensky for holding back Russian invaders — were badly damaged by shelling.

Head of the residents’ association in his building, Mykhailo Kyrylenko looked proudly at the new roof taking shape.

“People don’t have much money, but they agreed” to donate funds to gradually restore shattered homes, he told AFP.

Putin this week warned that Moscow would use “all means” to protect its territory — which former Russian leader Dmitry Medvedev said on social media could include the use of “strategic nuclear weapons”.

In the eastern Kharkiv region, Ukrainian officials said they had exhumed 447 bodies from a site near the city of Izyum, which was recaptured from Russian forces.

The Kremlin has accused Kyiv of fabricating evidence of the alleged war crimes.