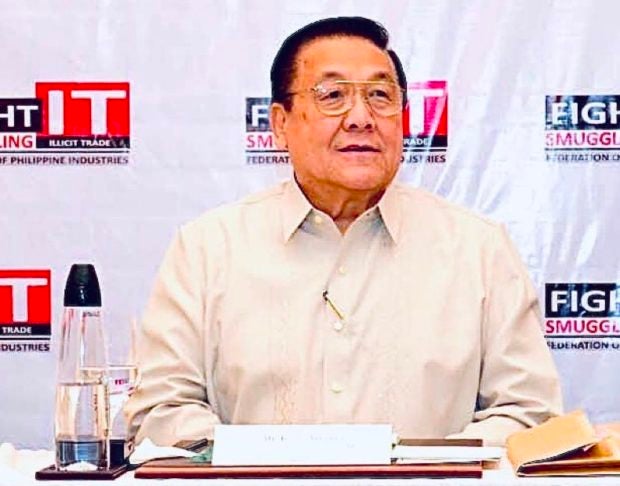 Dr. Jesus Arranza, head of the Fight Illicit Trade (Fight IT) movement and chairman of the Federation of Philippine Industries (FPI). (Photo from Fight IT)

The Marcos-Nograles bill aims to amend the 2016 Anti-Agricultural Smuggling Act of 2016 (Republic Act No. 10845)  to include and classify the illegal entry of raw tobacco, cigarettes, cigars, and heated tobacco products as economic sabotage and a nonbailable offense.

“Tobacco smuggling drains the country of billions in tax revenue, fuels criminal activity, puts consumers in danger and undercuts legitimate local manufacturers. Even before being codified in the bill as a heinous crime, it really is economic sabotage because it destabilizes communities and countries,” Fight IT head Dr. Jesus Arranza, who is also chairman of the Federation of Philippine Industries (FPI), said in a statement issued on Saturday.

Fight IT is a campaign of the FPI to raise an awareness of the alarming increase in illicit trade activities nationwide; inform, educate and protect consumers on the negative effects of cheap but fake products; and assist government in curtailing any and all forms of smuggling.

HB 3917 seeks to include tobacco, in both its raw and finished forms, in the definition of “agricultural commodities.”

“One way we can significantly deter this practice is by imposing heavier punishments for smugglers. If the proposed amendment by Rep. Marcos and Rep. Nograles passes, we now have a formidable chance of combating and even eliminating this scourge on our national economy,” Arranza said.

The current law also provides that persons or firms caught in possession of cigarette products that failed to settle excise taxes will only serve a prison term of 10-12 years.

The bill seeks to levy heavier penalties for violators by imposing a prison term of 30 to 40 years with no bail recommended. This is on top of paying fines double the value of the seized smuggled items, plus the total amount of unpaid duties and other taxes.

The two neophyte lawmakers stressed that the issue of cigarette smuggling is a “growing threat” that must be addressed urgently. According to various government statistics, as much as P30 billion to P60 billion annually is lost due to cigarette smuggling.

Reps. Marcos and Nograles noted that the government allotted almost P300 billion for the past 2 years to address the COVID-19 pandemic. These funds were taken from cigarette excise tax collections.

“If the entry and sale of smuggled cigarettes continues unrestricted, the national government stands to lose even more revenues. This will be detrimental to its pandemic recovery efforts, clearly, this is one of the biggest tax leaks that government needs to plug,” the legislators emphasized.

“Illicit smuggling does not just threaten our government institutions and enforcement agencies. Government revenue lost from foregone excise taxes and customs duties concerns all of us as law-abiding consumers and citizens. This is money that is supposed to go vital public services and infrastructure,” Arranza added.

The Fight IT Movement played a key role in the biggest tax evasion settlement in Philippine history when it brought to light the fraudulent business practices of a Bulacan-based cigarette manufacturer.

The company settled its tax deficiency during the past administration in the amount of P30 billion.