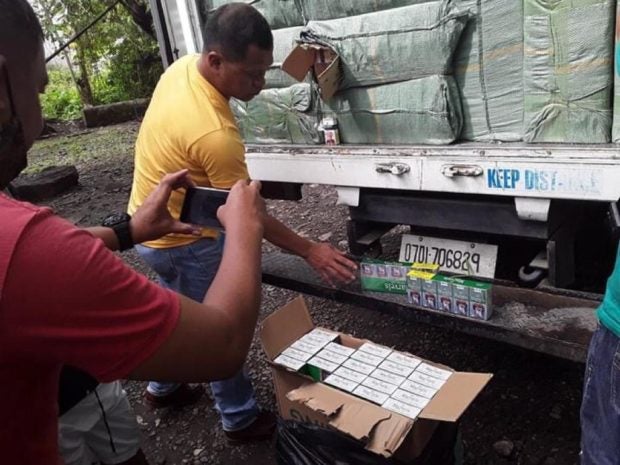 MANILA, Philippines — Law enforcement agencies have their hands full in going after illicit trading of counterfeit and smuggled cigarettes, which continue to persist in various parts of the country even under lockdown restrictions.

On Friday, May 22, a shipment of one 40-foot container consigned to a certain Muetisery Industrial Supply was seized at the Port of Manila by the Bureau of Customs (BOC) for misdeclaration of goods, which instead contained smuggled cigarettes bearing the brand name Fort.

The container van came from China and an inventory of the illicit cigarettes cargo is currently being conducted.

On Friday and Saturday, two law enforcement operations were reported by the Philippine National Police (PNP) and the National Bureau of Investigation (NBI). These are the arrests of a Chinese national in Pagadian City who was caught red-handed in possession of illicit cigarettes as they load boxes of these smuggled goods in a van; and a panel truck was intercepted loaded with 200 master cases of counterfeit cigarettes in Barangay Balintawak, also in Pagadian City, Zamboanga del Sur.

The two incidents were the result of months of surveillance by the law enforcement agencies.

The 200 master cases of fake cigarettes seized in Barangay Balintawak translates to a loss of P50.4 million in excise and VAT tax revenues for the government.

On the other hand, the Chinese businesswoman, who was identified as Shihua Li, 43, was caught with smuggled cigarettes while loading these in a white van. Seized from her were 199 reams of cigarettes worth P99,500, said Police Major Helen Galvez, information officer of the Police Regional Office – Zamboanga Peninsula.

Li was arrested at Purok Bougainvilla, San Jose Village in Pagadian City. She was not able to present valid documents when confronted by the police.

She was arrested for violation of Section 76 of Republic Act 10963, the Tax reform For Acceleration and Inclusion or TRAIN Law.
Galvez said they have coordinated with the BIR and BOC for the filing of appropriate charges against the Chinese businesswoman.

Earlier this month, police intercepted another incident of cigarette smuggling in the municipality of Bonifacio, Misamis Occidental involving employees of the provincial government of Zamboanga del Sur and are residents of Pagadian City.

Government revenue losses from excise taxes and VAT from the sequestered illegal cigarettes would amount to P45.6 million.

The Bonifacio police station reported that about 7:45 a.m. on May 5, 2020, Police Chief Inspector Alvin Mernilo Tamayo and members of the 1002 Manuever company and RMFB 10 conducted checkpoint operation at Brgy. Liloan, Bonifacio, Misamis Occidental and flagged down an Isuzu elf truck with temporary plate number 090110 registered to Jerry Dionson, a resident of Pagadian City to check the documents before entering the province.

Upon verification, the cargo truck driver failed to present legal documents for the alleged smuggled cigarettes or illicit whites. The driver and his companion introduced themselves as provincial employees of Zamboanga Del Sur and the said vehicle was used for Provincial Disaster Risk Reduction Management.

Zamboanga del Sur Governor Victor Yu told local media in a press conference that he is not tolerating the involvement of Richard Susi, who is a trusted employee of the provincial office.

He said the vehicle is not owned by the provincial government and instead owned by Susi.

Following the incident, the governor worked with the PNP provincial director to conduct an all-out war against illegal cigarette manufacturers and smuggling activities in the province.

Local media also reported that a resolution to create a task force against smuggling and illegal manufacture of cigarettes in the province. The governor also offered a reward for information on those who are behind the illegal operations.