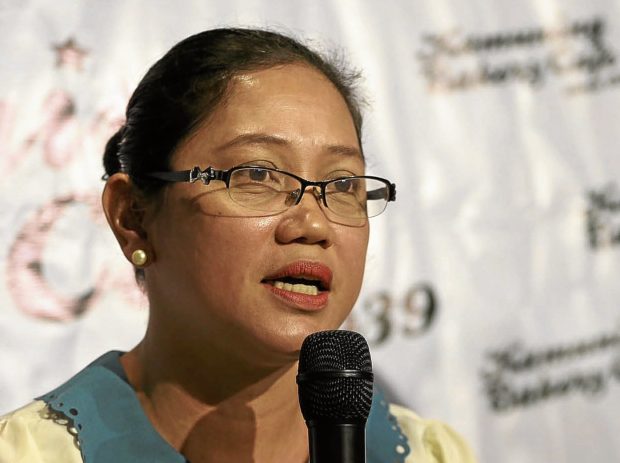 MANILA, Philippines — Gabriela party-list Rep. Arlene Brosas blasted the National Commission on Indigenous Peoples (NCIP) for allegedly continuing to spend so much money on conventions over the years, asking why the agency does not heed observations made by the Commission on Audit (COA).

Brosas during the House of Representatives’ plenary debates on the proposed 2023 budget on Friday asked the NCIP’s budget sponsor, Benguet Rep. Eric Yap, why the agency — despite being flagged by the COA for holding conventions and meetings in high end hotels or resorts in 2018 and 2019 — continued to spend extravagantly.

“Mr. Speaker, every year the COA has flagged NCIP under Allen Capuyan about extravagant activities and the purchase of expensive items,” Brosas said in Filipino.

“In the 2019 audit on the NCIP, state auditors noted that P3.83 million were spent in 2018, and P979,695 in 2019 for meals and accommodations for various programs and activities of the agency in Region 10 […] Is it the policy of the NCIP under Capuyan not to follow directives on austerity?  Because since he was at the NCIP, COA has flagged them consecutively,” she added.

In reply, Yap said NCIP has answered COA on the 2018 and 2019 issues, while the 2020 observation on the purchase of iPad and Lenovo tablets is being addressed.

“‘For 2019 and 2020, it has been addressed with COA, and the 2021 issue is being addressed right now […] Mr. Speaker, the activities had the approval of the chairman of NCIP, including the laptops because they were used for Zoom meetings during the pandemic,” Yap explained.

“It has the approval of the chairman of the NCIP and it has gone through COA,’ and answers by the auditor have been answered,” he added.

Brosas also pressed the NCIP on why it suspended the conduct of an Indigenous People Mandatory Representative (IPMR) selection process, which would have selected tribal leaders who can talk on behalf of their communities in several discussions.

According to the Gabriela lawmaker, NCIP has no jurisdiction to suspend the IPMR, adding that the power belongs to indigenous people.

Yap then suggested that Congress just launch its own probe on the alleged irregularities concerning NCIP, as it would be bad for the country if the Department of Social Welfare and Development (DSWD) is dragged into the mess — considering that the passage of DSWD’s budget is key to several anti-poverty programs.

NCIP is an attached agency of the DSWD, hence its budget was discussed also during the same time the House deliberated funding for the department.

“Mr. Speaker maybe it would be better to separate the discussions on NCIP, maybe we can start an investigation about it so that the budget of the whole DSWD would not suffer,” Yap said.

“Because we know that DSWD today is really focused on helping people that’s why it would be a waste if the budget would be set aside just because of what they are alleging, Mr. Speaker, against the NCIP, that the whole budget of the DSWD would suffer,” he added.

Brosas however pointed out that she, as a member of the House, has the right to bring up these matters.  She also noted another issue regarding NCIP, the coffee table book showing the indigenous people of the country, which was allegedly sourced using public funds and donations from mining groups.

“It seems like a syndicate is operating, Mr. Speaker.  The project was funded worth P7 million, but the NCIP under Chair Capuyan turned it into a business to rake in funds,” she said.

“What’s painful is that, they took advantage of the cultures of our indigenous brothers and sisters, by a commission of the government that is mandated to lead efforts in respecting the culture and traditions of IPs, Mr. Speaker,” she added.

Another Makabayan bloc lawmaker in Kabataan party-list Rep. Raoul Manuel called for the resignation of Capuyan, for allegedly engaging in partisan politics in launching the coffee table book.

“I appeal to the DSWD to replace the chairperson of the NCIP, or if the NCIP chair has any respect for the people or the law, he should resign,” he added.

This is not the first time that the NCIP and the Makabayan bloc have butted heads: last September, the bloc’s lawmakers called for the deferral of the NCIP budget due to Capuyan’s acts of red-tagging, or linking people to communist rebels.

Capuyan however during his exchange with Manuel at the committee level said that they were not engaged in red-tagging, but ‘truth-telling.