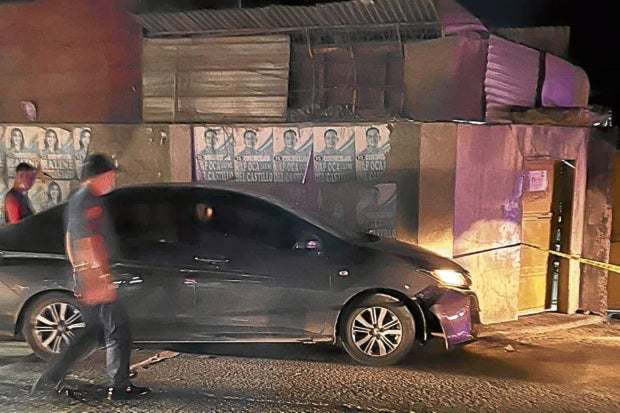 GATHERING EVIDENCE A policeman inspects the car of lawyer Karen Quiñanola Gonzales after she and her son were shot and wounded by two men in Mandaue City on Sept. 1. PHOTO COURTESY OF ATTY. ERWIN ROMMEL HEYROSA

CEBU CITY — Police have filed two counts of frustrated murder against a swimming coach and a still unidentified person who were linked to the ambush of a lawyer and her son in Mandaue City on September 1.

Aside from Delibo, the police were also after the driver of the getaway motorcycle.

“Delibo is not the only suspect here. He also had an accomplice, the motorcycle driver, who at this point remains unidentified,” Oriol said.

Delibo, 42, a resident of Sitio Mahogany in the City of Naga, in southern Cebu province, and the driver of the motorcycle have yet to be arrested.

The complaints were filed in the Mandaue City Prosecutor’s Office on September 16 but police revealed this to reporters only on Tuesday.

Since the suspects were not apprehended, they would be given a notice to submit their counteraffidavits and refute the allegations against them, Oriol said.

Gonzales, manager of the Cebu Port Authority’s business marketing and development department, was driving home with her son on a Honda sedan when they were shot and wounded by two men on board a motorcycle on Hernan Cortes Street in Barangay Tipolo, Mandaue.

Oriol said footage from security cameras as well as accounts from witnesses pointed to Delibo as the gunman.

Prior to the attack, investigators said Delibo, also known as “Coach Ricky,” allegedly threatened Gonzales for “meddling” in his business.

In 2021, Gonzales handled an estafa case against Delibo who, at that time, was working as a coach for a local swimming school. Oriol said Delibo was eventually arrested in Metro Manila last year but managed to post bail for his temporary freedom.

Delibo is also facing estafa complaints from other people, according to the police.

Oriol, however, declined to reveal details of Delibo’s cases as these were pending in court.