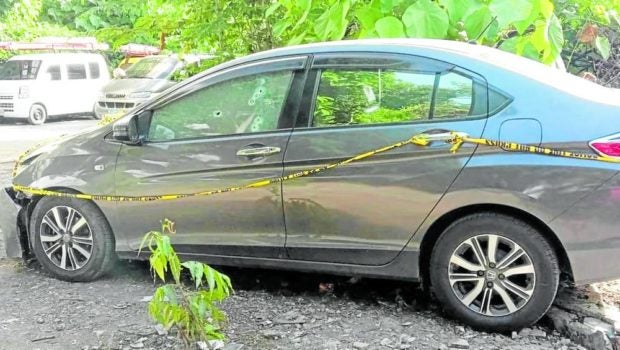 INTENT TO KILL | Bullets pierced through the driver-side window of the car used by lawyer Karen Quiñanola Gonzales and her son on the night of Sept. 1, 2022, when they survived an attack by unidentified gunmen in Mandaue City. The car is kept at the Mandaue police’s Station 4 compound. (Photo by PAUL LAURO / Contributor)

CEBU CITY, Cebu, Philippines — The National Bureau of Investigation has started an investigation of the Sept. 1 gun attack that wounded a lawyer and her son in Mandaue City, after the victims’ family sought the agency’s assistance.

Arnel Pura, the NBI Mandaue agent in charge, said they received an email from the sister of lawyer Karen Quiñanola Gonzales, requesting them to conduct a separate investigation in a bid to identify and arrest the gunmen.

“The NBI has considered this as a command or priority case,” Pura told reporters on Tuesday.

In a statement, the Commission on Human Rights (CHR) also announced its decision to look into the ambush.

“It cannot be overemphasized that lawyers and judges deserve utmost protection and an enabling environment that will allow them to freely dispense their duties without the perpetual fear that it may lead to harmful and/or violent reprisal,” she said.

Gonzales, 43, and her 19-year-old son, Jeremy, were on board their car when unidentified men fired at them on Hernan Cortes Street in Barangay Tipolo around 9 p.m.

The lawyer, who heads the business and marketing department of the Cebu Port Authority (CPA), was hit in the neck while her son was hit in the back. They are now out of danger and recuperating in a local hospital.

Pura said they were gathering footage of security cameras in the crime scene and nearby areas to give them leads in the investigation.

He said NBI investigators had yet to talk to Gonzales since doctors advised them to wait for about three weeks as the lawyer still needed to rest and recover.

Pura said they would coordinate with the Mandaue police office, which is handling the investigation.

Lt. Col. Franco Rudolf Oriol, deputy director for operations of the Mandaue City police, on Monday said they identified one “person of interest” but could not reveal details yet.

In a statement on Wednesday, the Integrated Bar of the Philippines (IBP) called for a nationwide effort to protect lawyers, judges and their families.

“Members of the legal profession must be able to do their duties freely, without fear of reprisal or violence. More often than not, lawyers are given the difficult task of striving for justice as unfortunately, many have done so at the cost of their own lives and at the risk of their family’s safety,” the lawyers’ group said.

“The IBP respectfully calls upon our law enforcement agencies, particularly the Philippine National Police and the NBI, to thoroughly investigate the matter, exact accountability and all the more significantly elevate state responsibility to guarantee that lawyers can do their job without any threat to their safety and security. It likewise requests the PNP (Philippine National Police) and the NBI to possibly provide protection to the victims until this matter is successfully resolved,” the IBP added.