Pangasinan to fix ‘unregulated’ quarry trade to save rivers 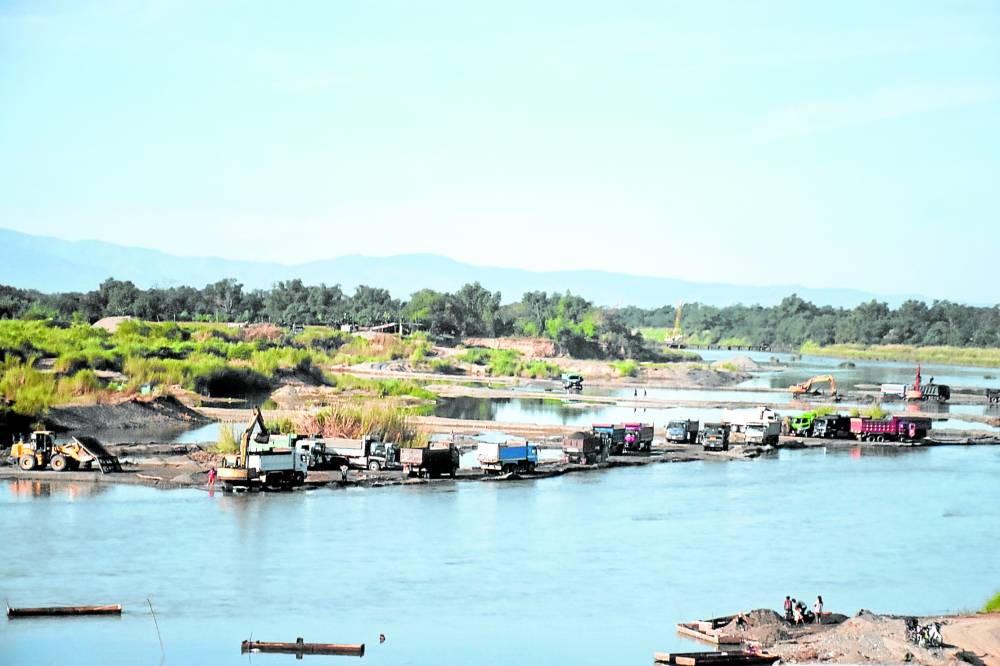 RIVER BOUNTY Trucks haul river sand and gravel quarried from the Agno River in this photo taken in Rosales, Pangasinan, in December 2020. The local quarry trade has been giving the provincial government P12 million in annual revenue, which the governor describes as “measly.” —WILLIE LOMIBAO

LINGAYEN, PANGASINAN — The quarry industry in Pangasinan will undergo an extensive regulatory overhaul to curb illegal operations that have damaged rivers and which put communities at risk to flooding, Gov. Ramon Guico III said.

During a recent meeting with officials of the Department of Environment and Natural Resources (DENR), Guico ordered a review of quarry operations which bring a “measly P12 million” annually to the provincial government, despite the daily extraction of river sand and gravel.

Pangasinan used to generate the highest quarry revenues in the Ilocos region, said Socrates Gaerlan, regional director of the Mines and Geosciences Bureau.

“When the sand and gravel business started, Pangasinan had the highest income on the number of quarry permits issued here when compared to permits released by the provinces of La Union, Ilocos Sur and Ilocos Norte. So we wonder why it has lagged behind,” Gaerlan said at the meeting with Guico.

Pangasinan has been collecting an excise of P16 per cubic meter of gravel since 2010 from haulers and the rate has not increased. Other provinces, records showed, collect P25 to P30 per cubic meter.

Guico said a team would be deployed by the provincial government and the DENR to screen operators and determine who have proper documentations.

“Those [firms] without papers will have to go. They have to stop,” he said in a separate interview on Monday.

Guico said the review should not disrupt quarry operations to avoid delaying schedules of construction projects relying on materials supplied by the province.But the review team must also assess the impact of the industry on rivers, which could worsen flooding during storm season, he said.

The management and disposal of waste from quarry operations is another problem that needs to be resolved, the governor added.

“Stone crushing plants are right in the middle of the river, which is dangerous because [it affects riverside sand that] are a natural flood control mechanism. Each day, I pass by the river along San Fabian town and the river is like ‘sungka (full of holes),’” Guico said.

Gaerlan said quarry extractions must be done upstream of the river while processing plants must be located outside the waterways.

Guico also observed that roads have been worn down by trucks hauling quarry materials. He urged the DENR to install weighing scales to prevent overloading, or to find an alternative quarry route to spare barangay roads. —YOLANDA SOTELO