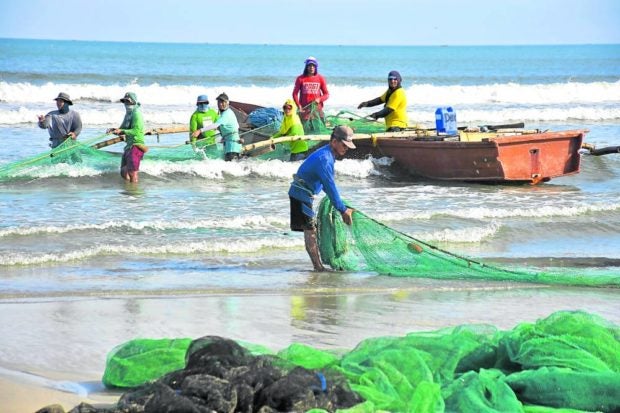 LIVELIHOOD SOURCE Fishermen in Binmaley, Pangasinan, check their net after a successful catch in Lingayen Gulf on March 19. Environmentalists and scientists say the proposed black sand mining projects in the gulf will bring “irreversible damage” to the marine environment that will impact the livelihood of fishing communities in the provinces of Pangasinan and La Union. —WILLIE LOMIBAO

DAGUPAN CITY — Two more mining firms have applied for government permits to mine Lingayen Gulf for magnetite, or black sand, prompting groups here to renew their opposition to what they described as “massive environmental destruction.”

Records from the website of the Mines and Geosciences Bureau (MGB) of the Department of Environment and Natural Resources (DENR) showed that Hong Kong-based Ferro Resources Corp. and Pangasinan Ferro Resources Corp. had pending applications for a financial or technical assistance agreement (FTAA) to conduct offshore mining.

The two companies applied for an FTAA, which is a contract involving financial or technical assistance for large-scale exploration and development of natural resources, in October last year.

Based on the MGB’s mining tenements statistics report in March, the two companies were planning to extract black sand from a combined area of at least 9,700 hectares in Lingayen Gulf.

Two other applications for an FTAA to quarry the gulf for black sand had been approved, including that of Iron Ore, Gold, Vanadium Resources Inc., which is waiting for an environmental compliance certificate from the DENR’s Environmental Management Bureau.

Vanadium Resources plans to explore 10,000 ha of the gulf by extracting 25 million metric tons of black sand, equivalent to 1,633,986 dump trucks (each with a 10-cubic-meter load), yearly for 25 years.

Another application for FTAA was filed in 2010 by Altamina Exploration Resources Inc. and will expire in 2035. 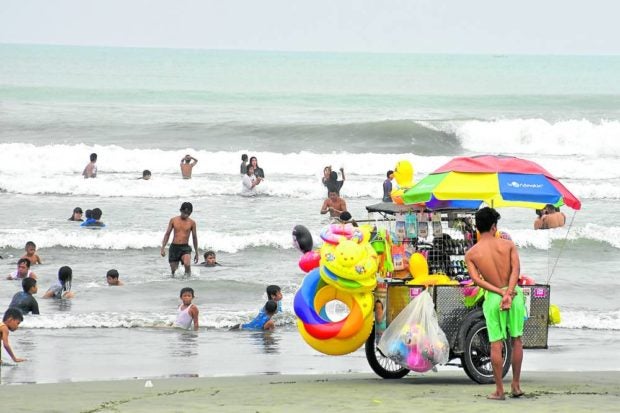 RECREATION SPOT Lingayen Gulf is also a popular place for recreation, as shown by tourists and residents frolicking at Binmaley beach on Easter Sunday. —WILLIE LOMIBAO

Local advocacy group Pangasinan People’s Strike for the Environment, which has been protesting the planned offshore mining in the gulf, has called on the public to oppose all forms of “destructive mining.”

“As we, Filipinos, elect our new set of leaders, we call on everyone to reject those who favor environmental destruction and plunder for the benefit of the few and against the interests of the citizenry,” the group said in a statement on April 13.

Several other nongovernment organizations and experts had issued warnings on the possible harm that the massive black sand mining posed on the marine environment in the gulf.

Early this year, the University of the Philippines Marine Science Institute (UPMSI) and the Bureau of Fisheries and Aquatic Resources (BFAR) said offshore mining would destroy the critical marine environment of Lingayen Gulf and that disturbing the gulf’s seabed would result in “irreversible damage.”

The mining activities would also affect the popular Hundred Islands National Park in the western section of the gulf and Agoo-Damortis Protected Landscape and Seascape in the east, UPMSI said.

“Bolinao-Anda Reef Complex, which supports Lingayen Gulf, is also in danger of being damaged by the project,” it added.

Records from the BFAR show that over 1.2 million people live in the towns and cities facing the gulf, and a majority of them rely on fishing for their livelihood.

Lingayen Gulf was classified as an environmentally critical area in 1993 by then President Fidel Ramos through Proclamation No. 156. INQ