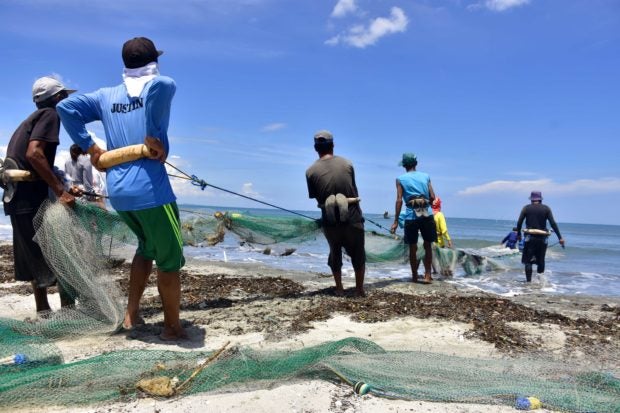 AT RISK: Fishermen in Pangasinan province catch fish using beach seine (“kalokor”) along the Lingayen Gulf, which will be the site of a massive black sand mining project that officials say threatens to destroy the environment and local fishing industry. —WILLIE LOMIBAO

DAGUPAN CITY, Pangasinan, Philippines — A massive offshore black sand mining project that will run for 25 years in Lingayen Gulf has stirred protests from local communities in Pangasinan province, describing it as an “environmental monster.”

“That much amount of sand to be taken from the environmentally critical gulf would mean devastation to the province, especially the second district which I represent,” Mendoza said during the question hour of the provincial board session last week.

Mendoza emphasized the need to consider the effects of the mining project on the marine life and environment of Lingayen Gulf, on which thousands of people depend for their livelihood.

The offshore magnetite mining by the company identified as Iron Ore, Gold and Vanadium Resources (Phils.) Inc. will cover 10,000 hectares of the gulf off the towns of Sual, Labrador, Lingayen and Binmaley and this city.

He said an annual haul of 25 million MT is equivalent to 1,633,986 dump trucks (each with a 10-cubic-meter load) of black sand. In 25 years, a total of 625 million MT or 40,849,650 truckloads of black sand would be hauled away by the company that has secured approval from Malacañang.

“Intriguing, but a permit was granted by the center of power of the national government,” provincial board member Noel Bince said in the same meeting, adding that the permit granted to Vanadium Resources was signed by Executive Secretary Salvador Medialdea.

According to a document posted on the EMB website, Malacañang approved the project, which is covered by Financial or Technical Assistance Agreement No. 07-2020-IOMR, on Nov. 25, 2020.

The agreement allows the conduct of large-scale exploration, development and commercial utilization of minerals found within the areas where Vanadium Resources has obtained the exclusive rights to extract magnetite sand.

Bince had asked the Department of Environment and Natural Resources (DENR) if the proponent was part of the Australian Vanadium Limited, but he said he was told by Mines and Geosciences Bureau legal officer Mario Tinorio that the company is 100-percent Filipino-owned.

In August this year, the company applied for an environmental compliance certificate (ECC) from the EMB for the exploration activities. A series of virtual public scoping was then held from Sept. 13 to Sept. 17 in the localities whose territorial waters will be part of the area to be mined.

Mendoza said he asked the DENR if the project could continue considering that Lingayen Gulf had been classified as an environmentally critical area (ECA) in 1993 by President Fidel Ramos through Proclamation No. 156.

Under the proclamation, Lingayen Gulf would be devoted to sustaining production of fish and other marine products, preserving genetic diversity, protecting natural features and enhancing outdoor recreation.

Ma. Isabel Perez, chief of the EMB’s environmental impact assessment (EIA) section in Ilocos, said all projects proposed in ECAs would have to go through an EIA before an ECC could be issued.

An EIA is not a permit but a planning tool that will be basis for a local government to decide if it will issue a permit to the proponent, said Perez.

The fishers group Pamalakaya issued a statement on Sept. 13 opposing the project, saying it would entail “devastating impacts” on the livelihood of at least 5,000 small fishers in Pangasinan.

Many fishponds and salt farms, which are connected to the gulf, are also threatened by the magnetite mining, said Bobby Roldan, chair of Pamalakaya in Central Luzon.

Timek-La Union, a community organization, is also opposed to the project, noting that fishermen in neighboring La Union province, which shares Lingayen Gulf with Pangasinan, will also be affected by the black sand mining since it can destroy dense mangrove forests.