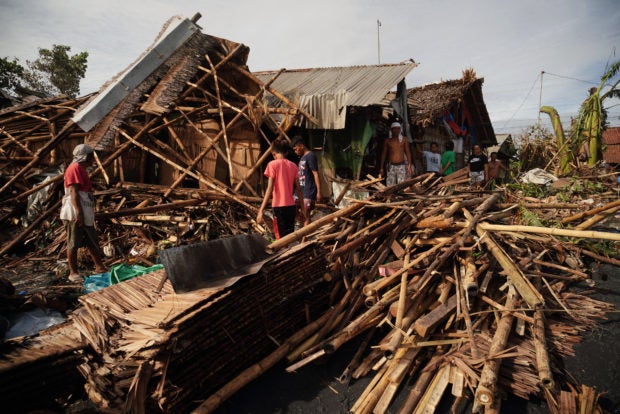 Residents salvage belongings from their destroyed homes in the coastal town of Dulag in Leyte province on December 17, 2021, a day after Super Typhoon Rai hit. (Photo by Bobbie ALOTA / AFP)

MANILA, Philippines — The Philippine Atmospheric, Geophysical and Astronomical Services Administration (Pagasa) is bolstering its efforts to address hazards in four areas in the country, which were identified as “vulnerable” to the impacts of climate change.

But she pointed out that the country received a project from the Green Climate Fund worth about US $10 million (around P584.4 million), which aims to look into “multi-hazard impact-based forecasting.”

“We’ll address the different hazards like storm surges, severe winds, flooding, and tropical cyclones in four areas – Legazpi, New Bataan, Palo in Leyte, and Tuguegarao. These are the areas deemed vulnerable to climate change impacts,” she further explained in a mix of English and Filipino.

De Guzman reiterated that the country is currently experiencing the dire effects of climate change, which are manifested in rising temperatures and the increasing number of intense tropical cyclones in the past ten years.

So aside from the Green Climate Fund project, De Guzman said the agency is also working on improving early warning systems, and adding radars and other structures that can help develop its weather and flood forecasting abilities.

She then urged the government and the public to do their share in mitigating the effects of climate change.

De Guzman said it could be as simple as conserving water or using mass transport, but on the part of the government, she sought for climate change to be among the issues considered in its planning and budgeting process.

She also recommended for the government to invest in more sources of renewable energy. —Lyka Farillon, INQUIRER.net trainee