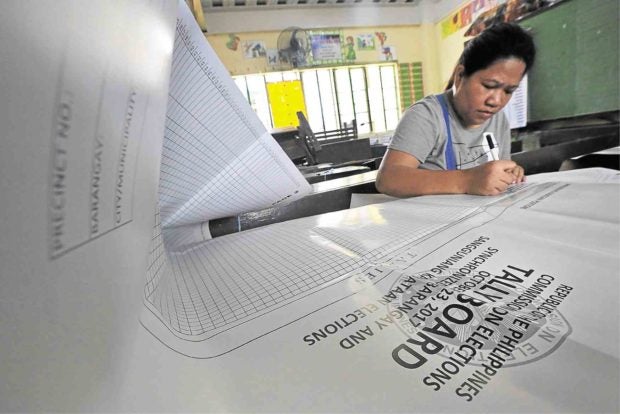 FILE PHOTO: A teacher prepares a tally sheet in one of the polling centers at Corazon Aquino Elementary School on Batasan Road, Quezon City, on the eve of the barangay  and the Sangguniang Kabataan elections in 2018. Philippine Daily Inquirer/Grig C. Montegrande

MANILA, Philippines — The Commission on Elections (Comelec) on Thursday released its revised calendar of activities for the 2022 Barangay and Sangguniang Kabataan Elections (BSKE).

Comelec said in an advisory that the Comelec en banc approved the adjusted schedule on Wednesday, September 21.

Below is the authorized final timetable for the BSKE in December:

The modification of the BSKE schedule came as Congress tackles proposals to postpone the BSKE this year.

A House bill on the BSKE deferment has been approved on final reading. It seeks to move the BSKE to December 4, 2023.

A similar bill at the Senate has been passed on second reading on September 21.

The last BSKE was held in May 2018 as President Rodrigo Duterte signed a law which moved the May 2020 BSKE to December 2022.