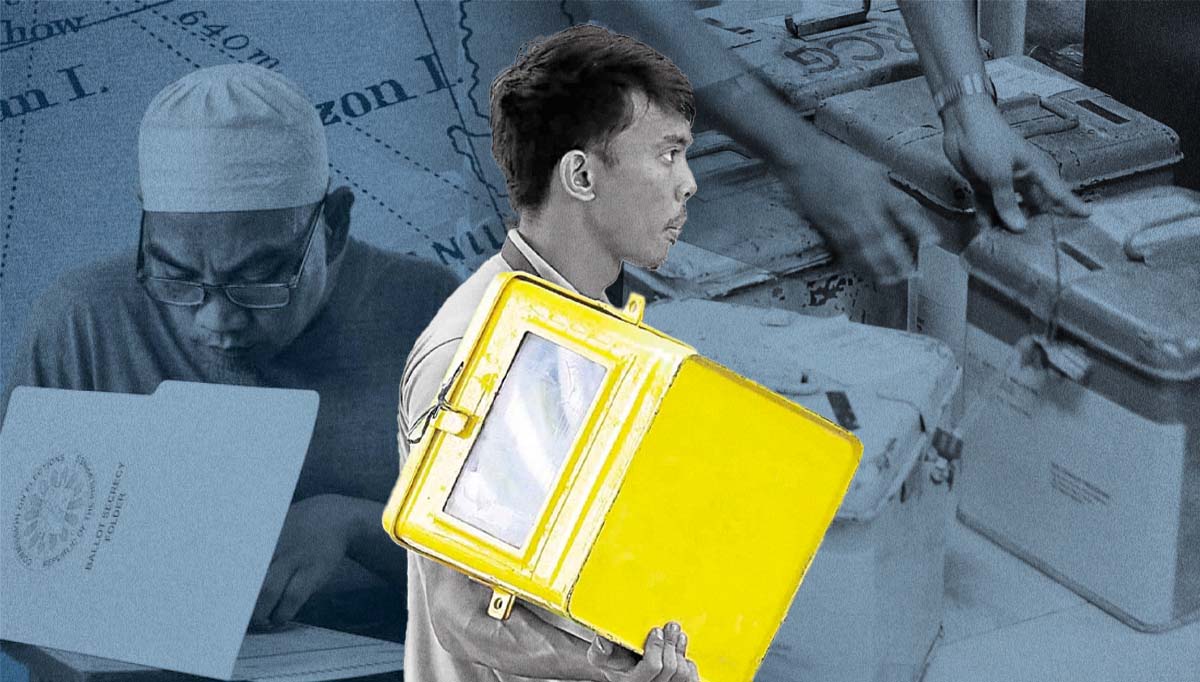 MANILA, Philippines—While the proposed postponement of the barangay and Sangguniang Kabataan (BSK) elections was seen to help the government save resources, the Commission on Elections (Comelec) said moving it to 2023 would cost P5 billion more.

Since July, 38 bills had been filed in Congress seeking the postponement of the said elections, which was supposed to take place on Dec. 5, to save resources, which could be diverted, especially to the government’s COVID-19 response.

Last Tuesday (Aug. 16), the House committee on suffrage and electoral reforms approved the proposal to move the elections, which was last held in May 2018, to next year, Dec. 4, 2023.

But Comelec Chair George Garcia stressed that delaying the BSK elections would cost the government P5 billion more, saying that the P8.449 billion, which was initially allocated for the elections, would no longer be enough. 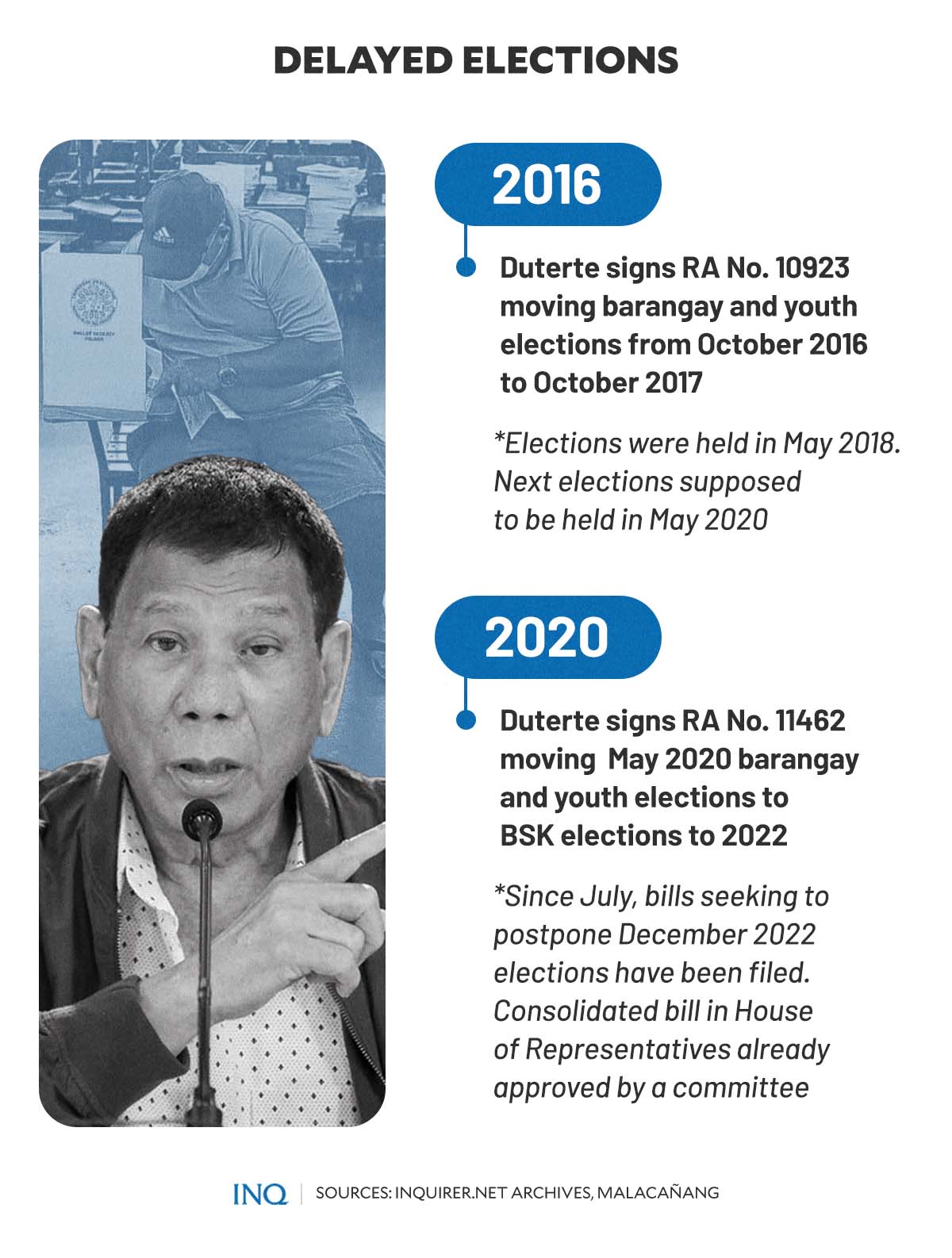 Garcia told the committee that when voter registration resumed last July 4, the Comelec aimed to register 29,088,496 new voters, but was only able to register 24,457,363 new voters.

He explained that should Congress decide to move the BSK elections, they expect the rest—4,631,133—to be registered: “That will mean [an] additional number of ballots, indelible ink, ball pens, padlocks and teachers.”

“If you ask us if the P8.449 billion is enough, it is enough because that is reserved for the Dec. 5, 2022 elections,” Garcia told the Senate committee on local government.

Last Aug. 4, Garcia had said that out of the P8.449 billion, P5 billion had already been spent for the registration of voters, which was held last month, and the payment of employees who worked overtime for election preparations.

“We are trying to spend money wisely because there’s the possibility that it will not push through. But because the business of election is always the business of the Comelec, we can’t act as if there’s no need to prepare anymore,” he told CNN Philippines.

He stressed, however, that most of the P8.449 billion for the BSK elections was still “intact” and that they would spend these resources wisely to prevent wastage in case it was moved to next year, the second postponement since the last one in 2018. 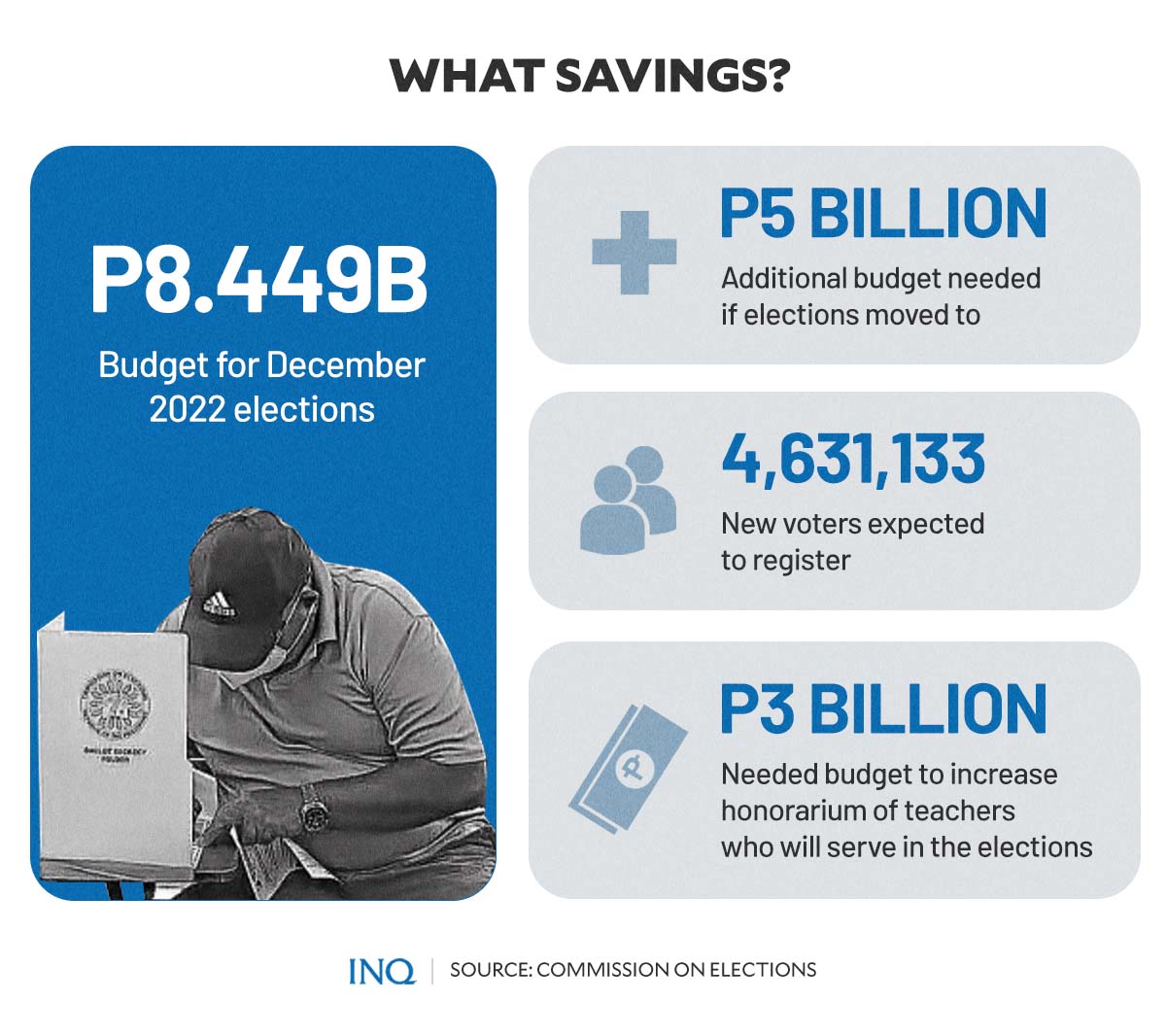 Garcia said that while the Comelec respects whatever decision Congress and the President make, he is personally all for the conduct of the elections this year, saying that it is still “all systems go within the Comelec.”

The committee approval in the House of Representatives indicates that the bill to postpone the elections is now for second reading, where sponsorship, debates, amendments, and voting take place.

Twelve lawmakers, who are part of the committee, voted to move the elections to next year. Only Makabayan lawmakers France Castro (ACT Teachers) and Raoul Manuel (Kabataan) voted against the proposal.

The two said postponing the elections, which was supposed to happen in May 2020, would deprive voters of the chance to choose a new set of officials to lead their communities.

Likewise, Manuel had said that contrary to claims that the postponement of the BSK elections would help the economy, such a move would only hinder economic recovery.

He stressed that a term extension for barangay and youth council officials would effectively “paralyze” many SKs all over the Philippines: “Election postponement would actually hinder rather than help achieve efficient governance and services for pandemic recovery.”

The lawmaker explained that SK programs could be “stagnated” because corrupt local officials can benefit from the lack of change in present SK and even barangay officials.

“The national elections ignited a broad movement for good governance that has raised youth involvement in politics and public affairs to a level never seen before in recent time,” Manuel stressed.

Last month, the Legal Network for Truthful Elections had said that it was time that Filipinos assess their local leaders: “We should pressure our legislature not to postpone the 2022 BSK elections. It was already postponed in 2018, 2020.”

The BSK elections, as mandated by Republic Act No. 9340, are supposed to happen every three years, but delays and postponements have resulted in officials holding office for up to five years, like those who won in May 2018.

The elections this year were actually scheduled in May 2020, but former President Rodrigo Duterte signed a law in 2019 to move the conduct of the BSK elections to Dec. 5, 2022.

Based on bills filed in the 19th Congress, officials who will be elected in the next elections will have a three-year term, which will begin at noon of Jan. 1, 2024 if Congress and the President decide to move the elections to 2023.

Incumbent officials will also be allowed to serve in a holdover capacity until the election of their successors. The committee version of the bill will still be debated in a plenary session.

After Garcia’s statement that postponing the election would cost the government P5 billion more, instead of helping save resources, especially for COVID-19 response, some lawmakers admitted they were wrong.

Cavite Rep. Elpidio Barzaga Jr. and Quezon City Rep. Franz Pumaren agreed that any possible savings could not be used to defend the postponement: “Basically we won’t be saving money.”

“We should not always say that if we postpone the elections, we would save the money, or the P8 billion could help gear up the economy, especially since we are just recovering from the pandemic,” Quezon City Rep. Marivic Co-Pilar said.

But Barzaga stressed that “I think the issue of whether or not we will get to save will not be the main issue,” saying that the main issues will be the will of legislators, the desire of the public, and finally, the 38 bills filed reflecting the sentiment of Congress.

For Quezon City Rep. Marvin Rillo, lawmakers should look at the “bigger picture” because it is still early to say that the government will lose P5 billion more if the elections are postponed.

“If it is postponed, [let’s ask] how much the government would earn if we reallocate the P8 billion budget […] It’s a bit premature to say we would lose P5 billion. You look at the bigger picture,” he said.

This was shared by Deputy Speaker and Pampanga Rep. Aurelio Gonzales, who said that “on the issue of savings, we really would not be able to save […] we can use this as a quick fix, we need more budget to fight the pandemic.”

The 2022 General Appropriations Act was signed last year, giving the government P5.024 trillion, which will be used for programs, especially to address the health and economic crisis in the Philippines.

But Garcia asked Congress to decide soon, stressing that the Comelec needs direction as it would soon have to proceed with preparations such as the printing of ballots and procurement of election materials.

This, as the Comelec needs to continue complying with the provisions of Republic Act No. 11462 until a new law is passed by Congress to delay and then move the BSK elections.

He also appealed to Congress not to move the elections to 2024 because by that time, the Comelec will already prepare for the 2025 elections.

READ: House asked not to reschedule barangay polls for 2024 due to midterm polls

“As far as the Comelec is concerned, we recognize that the power to postpone the elections or even to extend the term of office of BSK officials rests solely on the absolute prerogative of Congress.”

“We in the Comelec will abide by the mandate of Congress and the Executive as far as postponing the election is concerned, and whether it be May of 2023, December of 2023, please don’t do it by 2024,” he said.

Garcia said the Comelec would need two months or more before the elections to prepare because of the need to print over 90 million ballots for 42,000 barangays and deliver these to different provinces all over the Philippines.