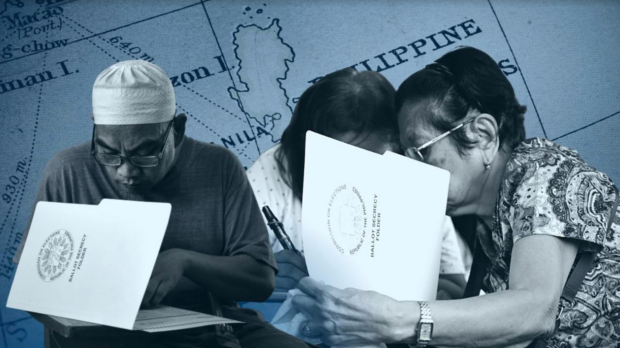 MANILA, Philippines—While Congress is still considering proposals to postpone the Barangay and Sangguniang Kabataan (SK) elections on Dec. 5, millions of Filipinos have already registered to vote.

With Republic Act No. 8189—the Continuing Voter’s Registration Act—stating that voter registration is prohibited 120 days until the election, the Commission on Elections (Comelec) said the registration, which was opened on July 4, will end on July 23.

The Comelec initially wanted to have one million Filipinos register for the Barangay and SK elections, but as the number of new registrants hit 1,712,315 on Monday (July 18), it recalibrated its target to two million.

The commission said that since July 4, it already processed 2,793,285 applications, including applications for transfer of voter registration, transfer from overseas to local, and reactivation. 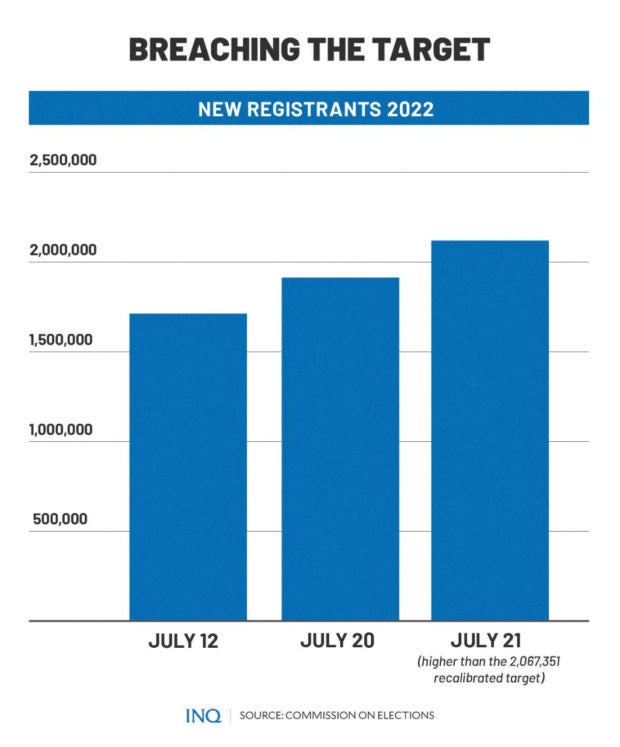 The 2,119,878 was higher than the Comelec’s “secondary, recalibrated total new registrants of 2,067,351 for both Barangay and SK elections,” Laudiangco said while commending the new registrants.

“We thank the Filipino people, especially the youth, for their continuing fervor for our nation’s democratic processes […] We hope that we pursue patriotism in the exercise of our right to suffrage and continue our trust in governmental institutions.”

He stressed that for the barangay election, the Comelec is expecting 66,053,357 voters to participate. The voter turnout last May was the highest in the history of the Philippines as 55.5 million—82.6 percent of 67.4 million—went out to vote.

‘No plans to extend’

With the number of new registrants breaching two million, Commissioner Aimee Ferolino said there are no plans yet on whether the Comelec will extend the voter registration.

“There are no plans yet. That’s why we announced the days earlier so they can go to our registration centers. But we will see if there is a need, if it is feasible to extend,” Ferolino said.

Expecting last-minute applications on the last day, the Comelec said it signed a partnership with SM Supermalls and Robinsons malls for the setting up of 76 and 30 satellite voter registration centers. 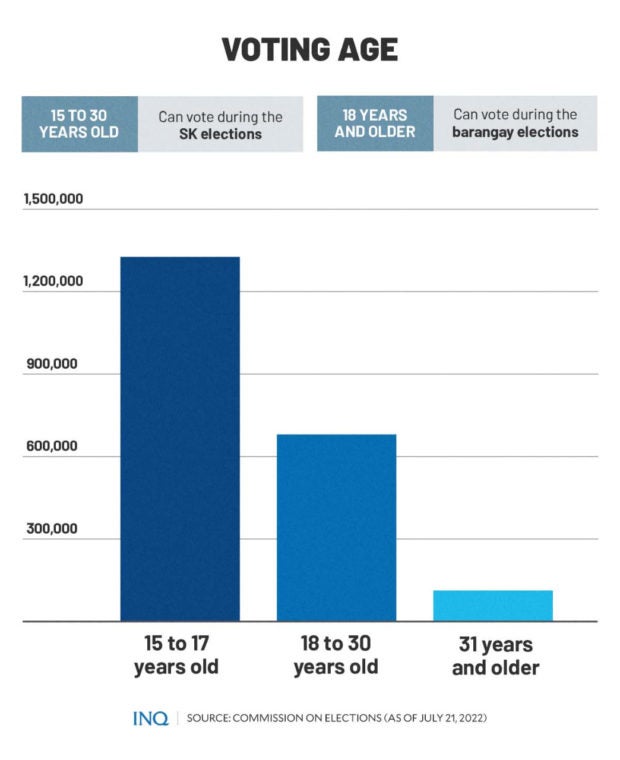 This, as the Comelec said that it wants to make the process more accessible and convenient. The voter registration is set only until Saturday (July 23), from 8 a.m. to 5 p.m.

Ferolino shared that in a satellite registration in a mall in Baguio City, while many people were in line, the processing of registration for the December 2022 barangay and youth elections was smooth.

However, in Puerto Princesa City, Palawan, radio station dzBB reported that residents have already decided to camp out within the compound of a mall, which serves as a satellite registration center, to get an application slot.

Will there be elections?

While the number of new registrants is overwhelming, less than five months until December 5, it is not yet certain whether Congress will pass a law to postpone the barangay and SK elections.

Laudiangco said he already asked Congress to decide as soon as possible, saying that the Comelec is hoping that the decision will come out immediately so the Comelec can either continue with the preparations or stop.

“This is so that we can postpone any other procurements that we have not yet concluded,” he said, stressing that the Comelec needed to know if it should proceed with procuring election paraphernalia.

“Until such time that a new law is passed resetting or rescheduling the elections, the Comelec shall continue to comply with the dictates of RA 11462 and continue with our preparations,” said Laudiangco. 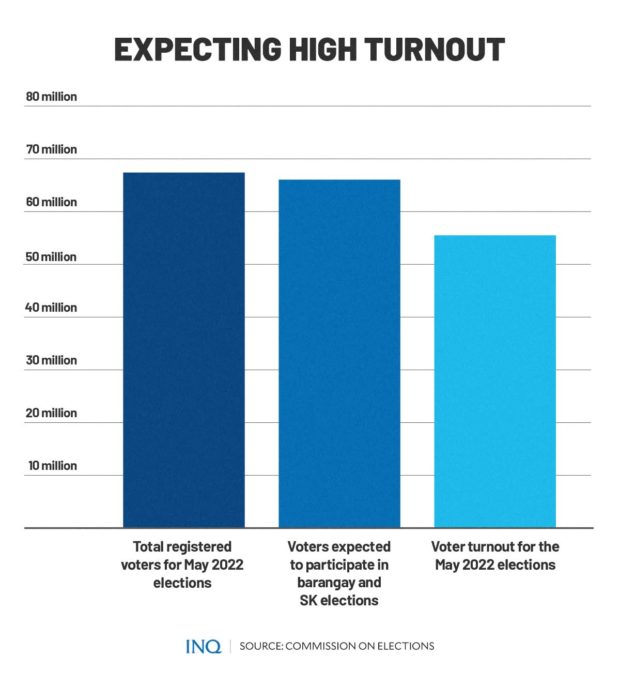 He stressed, however, that the Comelec can still repurpose materials that had already been procured for the next barangay and SK elections in case Congress and the President decided to postpone it.

“The goods and services being procured can be readily used on a date to be set by an RA postponing the elections […] Thus, there is no wastage in our ongoing preparations,” said Laudiangco.

He said the P10 billion could instead be used for initiatives to keep the people safe from COVID-19 and help the economy bounce back from the standstill that was caused by the health crisis.

Sen. Chiz Escudero also filed a bill, saying that it seeks “to bolster the stability and consistency of public service at the barangay level by postponing the […] elections from the fifth day of December 2022 to the second Monday of May 2024.”

The bill seeks to realign some of the resources for the elections—P8.44 billion— “towards interventions aimed at sustaining the current momentum in addressing the coronavirus pandemic and achieving our collective socioeconomic objectives.”

However, two election watchdogs—National Citizens’ Movement for Free Elections (NAMFREL) and Legal Network for Truthful Elections (LENTE)—said it was time that Filipinos assess their local leaders. 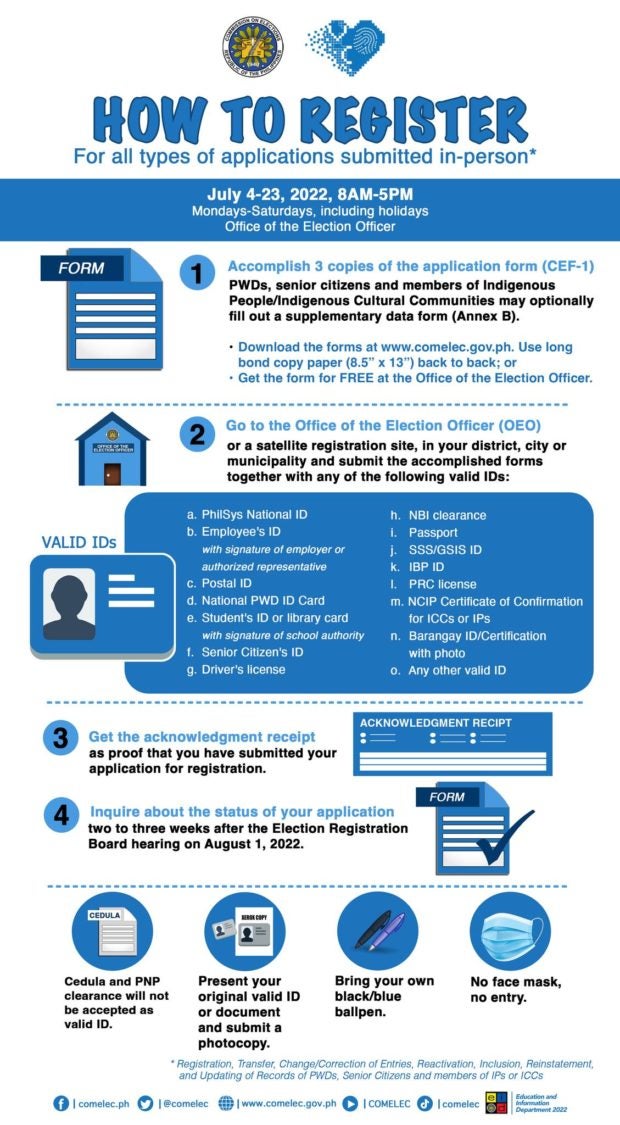 It stressed that postponing the elections again would deprive Filipinos of their right to choose their local leaders and assess their performance in the past years since the last election in 2018.

“Maybe the primary consequence is we deprive our people of their right to choose their leaders […] It is high time for all of us [to elect a new set of leaders] because barangay officials are the closest government officials that we interact with in our day to day lives and we have seen in this pandemic how effective or how good it is to have good barangay officials.”

NAMFREL said: “Definitely, we will oppose any move to postpone the barangay elections, given that the savings is a flimsy excuse because right now Comelec is already spending for the preparations and the P8 billion has already been spent by Comelec because of the preparations. So postponing it is useless.”