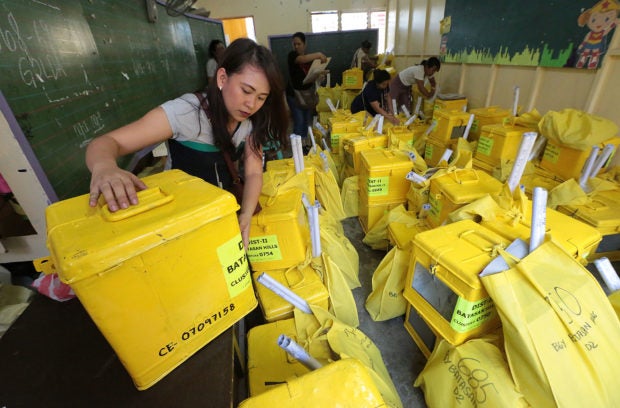 File photo shows teachers preparing election materials at the Corazon Aquino Elementary School in Quezon City, on May 13, 2018, a day before the barangay and Sangguniang Kabataan elections. (INQUIRER/GRIG C. MONTEGRANDE)

MANILA, Philippines — A bill seeking the  suspension of the December 2022 barangay and Sangguniang Kabataan (SK) elections was filed in the Senate by Sen. Francis Escudero.

According to the explanatory note of Escudero’s still unnumbered bill — copies of which were shared to reporters on Friday — suspending the barangay elections until May 2024 provides advantages, especially given the current situation where the country is still fighting the COVID-19 pandemic.

“This Senate bill provides several distinct advantages.  First, the postponement of the barangay and SK elections affords continuity in government operations at the barangay level, particularly in implementing national programs and projects,” the senator said.

“Second, the proposed measure gives ready access to the institutional memories of the grassroots leaders, which could be used in formulating plans, programs, and other interventions to adapt to the new normal and to return to the pre-pandemic growth trajectory of the Philippines,” he added.

Escudero stressed that the measure will likewise allow the national government to allocate the portion of the budget that would be used for the conduct of the polls — around P8.44 billion — to other pressing concerns.

“Third, the postponement of the barangay and SK elections allows both the national government and local government units to focus on the interventions needed to recover from the pandemic and address the ongoing concerns over oil prices, inflation, and poverty,” he explained.

“Finally, the bill enables the government to realign a portion of the P8.44 billion appropriations for the barangay and SK elections towards interventions aimed at sustaining the current momentum in addressing the coronavirus pandemic and achieving our collective socioeconomic objectives,” he added.

Escudero is not the first to file a bill suspending the said polls among lawmakers in the incoming 19th Congress.

The Commission on Elections (Comelec) recently said that the barangay elections this December would push through following several postponements, unless a new law is passed.

Read Next
Biden begins sensitive Saudi trip with fist bump for crown prince, handshake for king
EDITORS' PICK
Percy Lapid’s kin: ‘We demand that his cowardly assassins be brought to justice’
Nothing’s certain so here’s how everyday Filipinos can make the most out of their Plan B
Do all the things you do, faster
PNP vows to bring justice for slain Percy Lapid; says probe underway
House energy committee chair Arroyo bats for cheap electricity
‘Seniority’ requirement despite vacant posts in DOH bothers senators
MOST READ
Student stabs teacher dead in Samar town
Trixie Angeles quits as press secretary due to health reasons
Not rehired?: Trixie Angeles not on list of reappointed Cabinet execs
Heart Evangelista to stay abroad ‘indefinitely’: ‘Hindi muna ako babalik’
Don't miss out on the latest news and information.