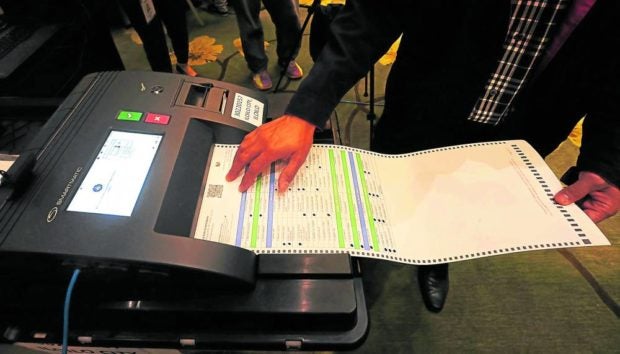 FILE PHOTO: Test voters participate in an end-to-end demonstration of the automated election system or vote-counting machines at a hotel in Manila ahead of the May elections. Philippine Daily Inquirer/MARIANNE BERMUDEZ

MANILA, Philippines — Sangguniang Kabataan (SK) programs nationwide are in danger of being paralyzed should the suspension of barangay elections in December 2022 happens, a youth party-list said on Wednesday.

According to Kabataan Rep. Raoul Manuel, contrary to the belief that postponement of the barangay and SK elections would help the economy, such measures would only further hinder growth and the pandemic recovery.

“Another term extension would effectively paralyze many Sangguniang Kabataan nationwide. Election postponement would actually hinder rather than help achieve efficient governance and services for pandemic recovery,” Manuel said in a statement.

The lawmaker explained that SK programs are in danger of stagnancy because corrupt local officials can benefit from the lack of change within the current barangay and SK officers.

“The national elections ignited a broad movement for good governance that has raised youth involvement in politics and public affairs to a level never seen before in recent time,” Manuel noted.

“Of course, corrupt officials who have a stake at the local elections would be scared. We call on fellow youth to fight for our right to vote [in] the December 2022 local elections,” he added.

At least two proposals are in Congress seeking to suspend the barangay polls. Last July 13, it was announced that Davao Oriental 2nd District Rep. Cheeno Miguel Almario filed House Bill No. 1367, which seeks to reschedule the said polls to October 9, 2023.

Almario reasoned that the suspension of the polls would allow the national government to allocate the funds intended for the elections to other more pressing matters like the COVID-19 response.

Senator Francis Escudero filed his version, this time seeking to hold the barangay elections in May 2024. According to Escudero, the government can reallocate around P8.44 billion that would have been needed for the polls.

Kabataan party-list, however, is not alone in opposing another suspension of the polls. Last May, former Senate president Vicente Sotto III said that the barangay elections should continue, as it seems barangay officials now have longer terms than an elected president. With reports from Christine Annie Asistio, INQUIRER.net trainee