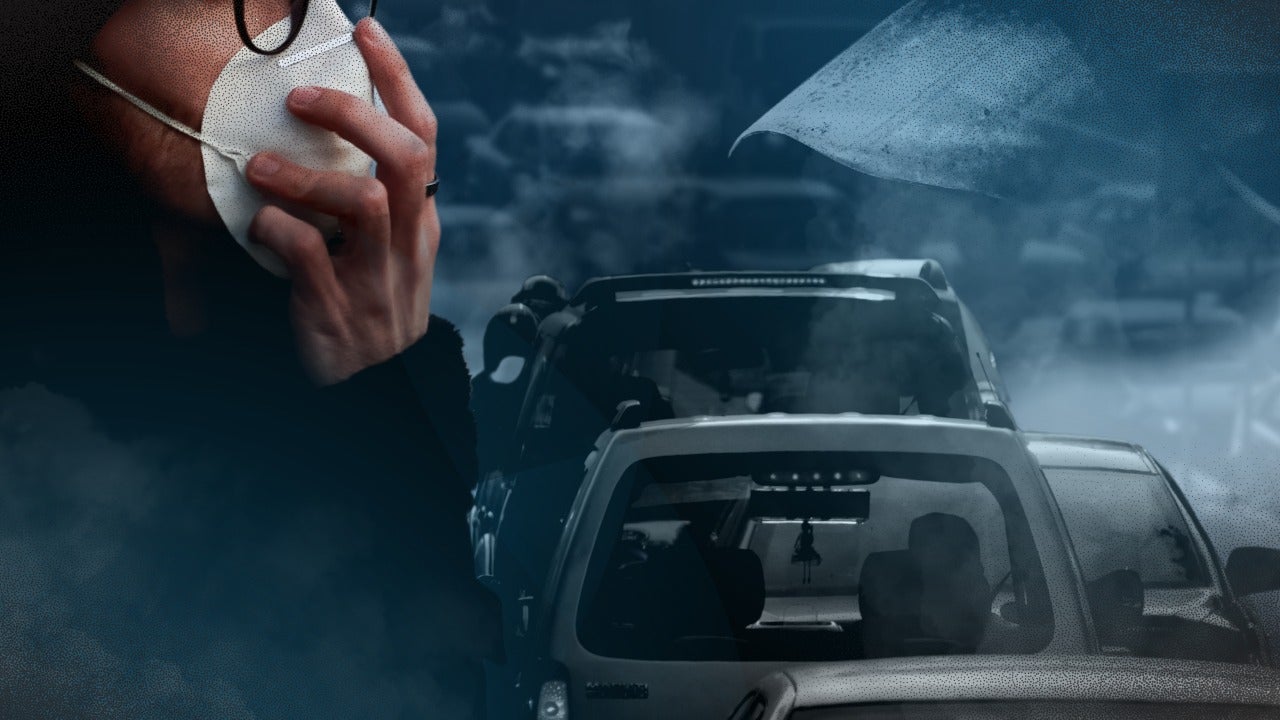 MANILA, Philippines—Have you ever imagined how cities would look, feel and sound like without cars?

The Metro Manila Development Authority (MMDA) had said that before the COVID-19 crisis hit, there was an average of 405,000 vehicles traversing the roads of Metro Manila every day.

Back in 2020, when lockdowns were imposed by the government to reduce the spread of the SARS-CoV2 virus, Filipinos saw road congestion easing and air quality improving.

However, the MMDA stressed that the volume of vehicles in the metropolis is soon expected to breach the 2019 level, saying that before the elections, there had already been an average of 400,000 vehicles on the road daily.

“That is only 5,000 vehicles short of the pre-pandemic level of 405,000,” then MMDA chair Romando Artes told Teleradyo, adding that the return of face-to-face classes was likely to increase the vehicle volume.

Artes also said that since the start of the COVID-19 crisis, newly purchased vehicles may have increased to “more or less half a million” and that 16 to 17 percent of these are in Metro Manila. 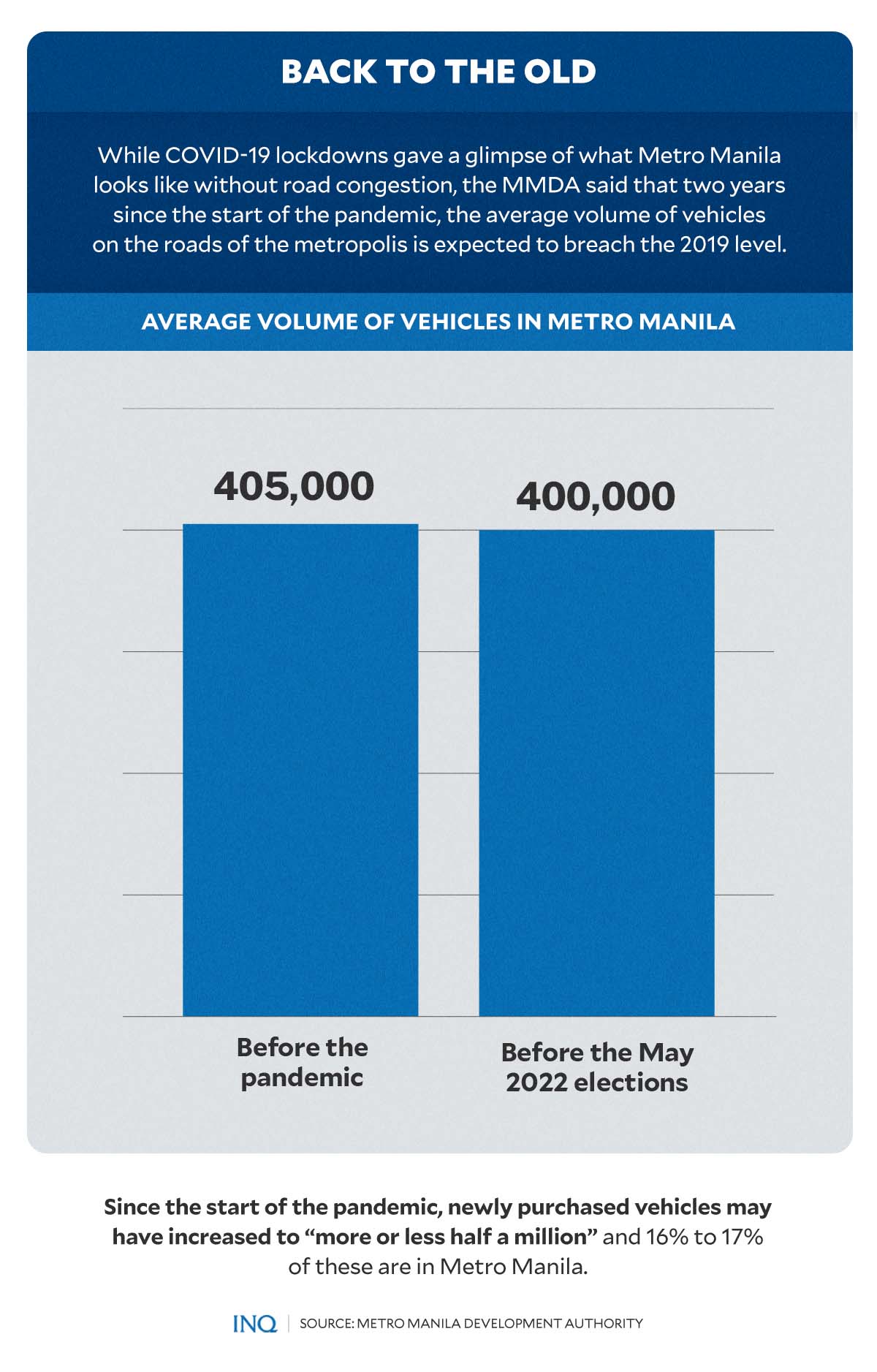 With the commemoration of World Car-Free Day on Thursday (Sept. 22), the World Carfree Network said people have a chance to imagine how cities would look, feel and sound like without cars 365 days a year.

The United Nations Environment Programme said that every year, in cities all over the world, motorists are encouraged to give up their cars for a day, stressing that there are several benefits of going car-free, including the reduction of air pollution.

The celebration, it said, likewise promotes walking and cycling in a safer environment, saying that “car-free days are an opportunity for cities to highlight how congested roads can be used in different ways.”

This, as the TomTom International B.V.’s Traffic Index 2021 stated that Metro Manila—with a traffic congestion rate of 43 percent—is the 18th most congested city in the world.

This World Car-Free Day, the coalition encouraged people to celebrate by doing these as their own way of “lessening air and noise pollution, easing congestion on our roads, and making it easier for everyone to get to where they need to go.”

According to Greenpeace Southeast Asia, air pollution from fossil fuels—coal, oil, and gas—is the cause of an estimated 27,000 premature deaths every year in the Philippines, and can cost 1.9 percent of gross domestic product in economic losses.

Back in 2018, World Health Organization said that the Philippines had the third highest deaths related to air pollution, with 45.3 deaths for every 100,000 individuals, next to China (81.5) and Mongolia (48.8).

“Fossil fuels are not only bad for the climate, they’re also bad for our health and our economy,” Khevin Yu, energy transition campaigner of Greenpeace Philippines, said in 2020.

Key findings of the report “Toxic Air: The Price of Fossil Fuels” stated that an estimated 40,000 children die before their fifth birthday because of exposure to PM2.5 particles from fossil fuels, primarily in low-income states.

Nitrogen Dioxide (NO2)—a byproduct of fossil fuel combustion in vehicles, power plants and factories—is linked to four million new cases of asthma in children each year, with an estimated 16 million children worldwide living with asthma because of NO2. 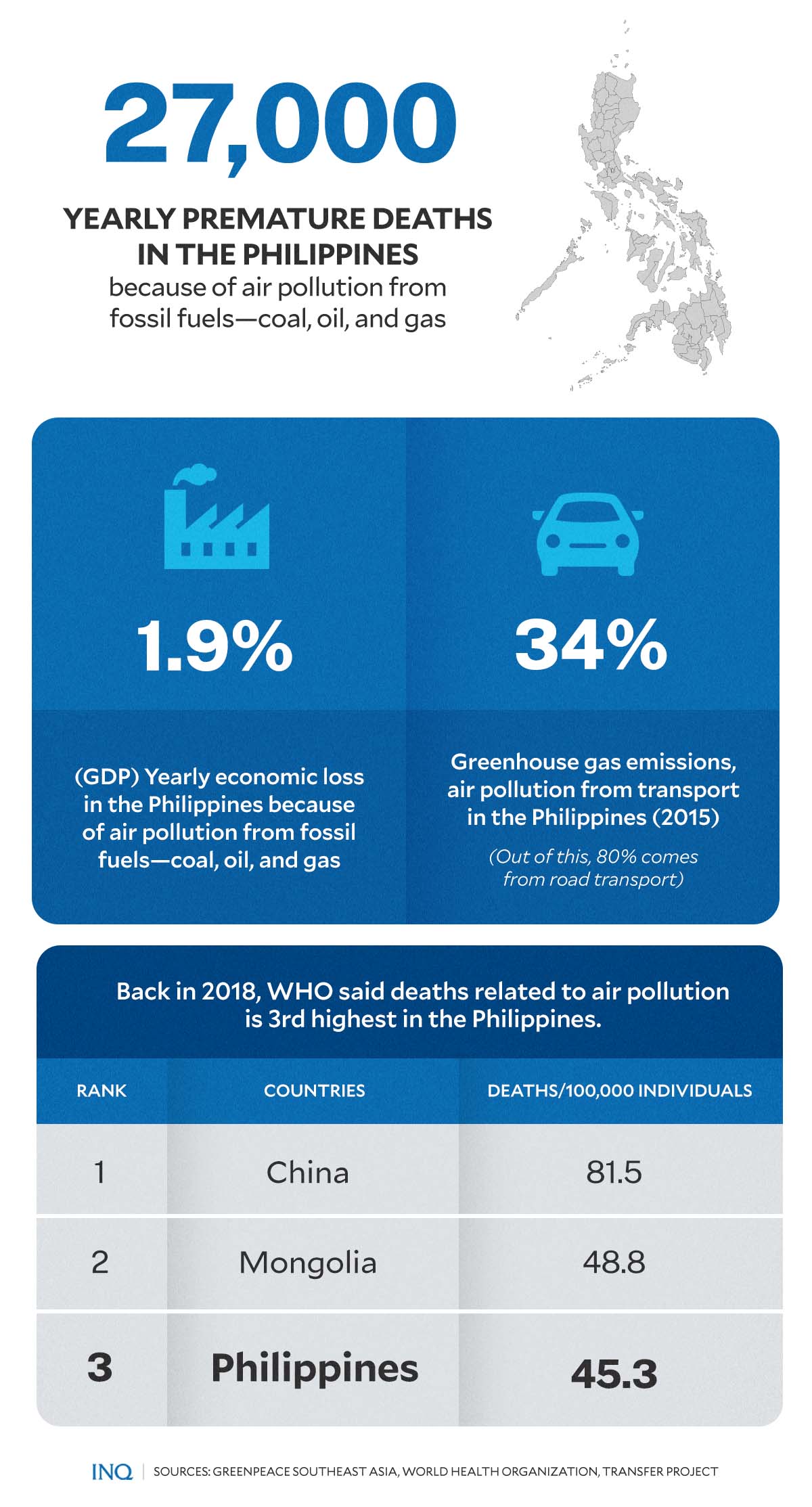 With regard to productivity, air pollution from fossil fuels is attributed to cause around 1.8 billion days of work absence due to illness each year worldwide, equivalent to an estimated annual economic loss of $101 billion.

A CNBC article said that climate activists and campaign groups are intensifying their calls for an abrupt end to the fossil fuel era, condemning the round of net-zero pledges from many governments and corporations as a “smokescreen that fails to meet the demands of the climate emergency.”

“Calls to keep fossil fuels in the ground are anathema to leaders in the oil and gas industry, who insist the world will continue ‘to be thirsty for all energy sources’ in the years ahead,” it said.

All over the world, governments have been pushing for the use of electric vehicles (EVs) as a way to mitigate the consequences of climate change. Through the years, consumers have been encouraged to consider EVs as a cleaner alternative.

Last May, the Department of Trade and Industry said that it wanted tariffs on EVs removed for a period of five years, saying that it “envisioned to drive down the purchase price of EVs, thereby generating demand and encouraging investments.” 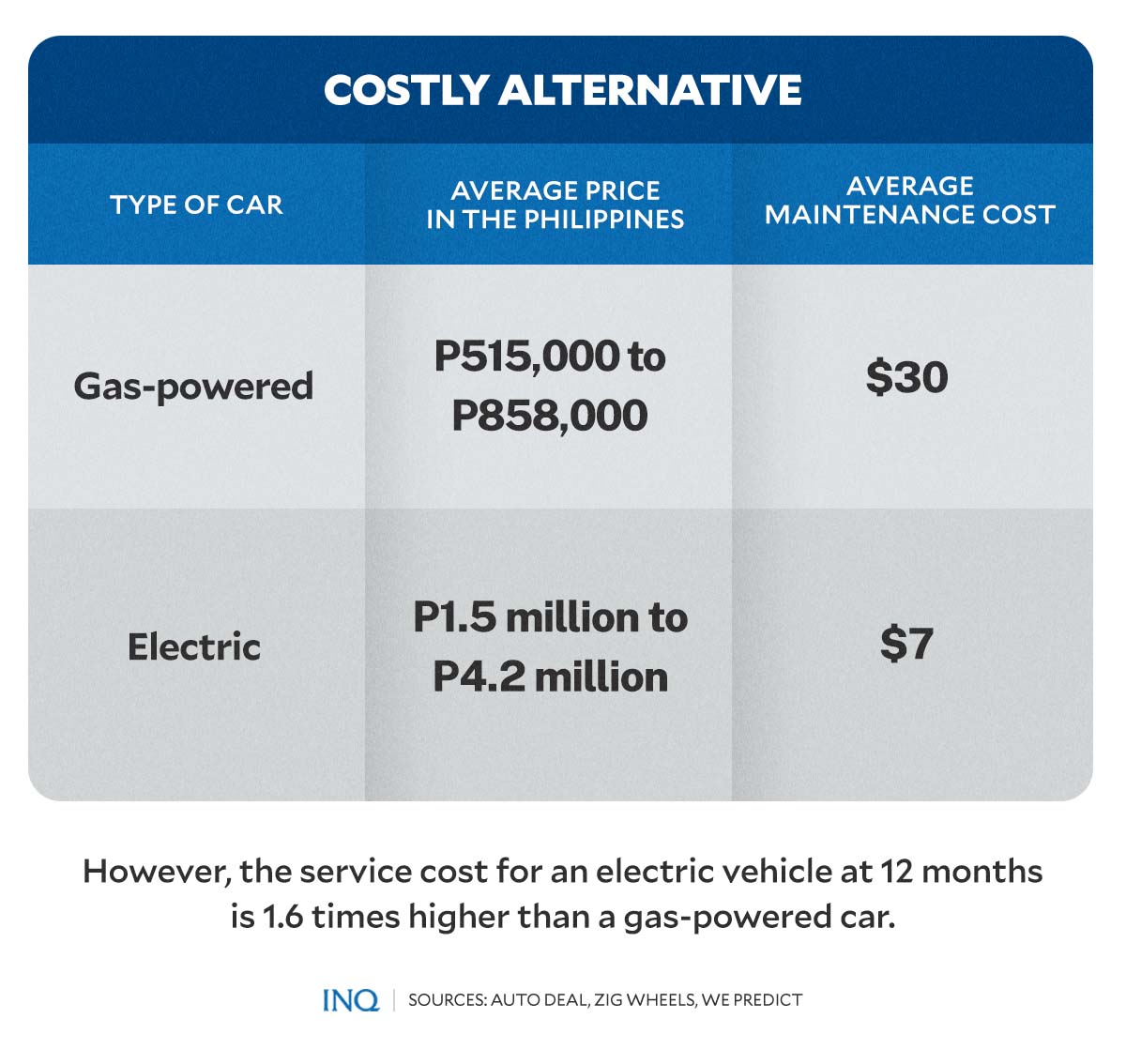 Based on a study by the analytical firm We Predict, an average of only $7 was spent on the maintenance of an EV in the first year of ownership against the $30 spent on gas-powered vehicles.

However, it pointed out that while “EVs are more practical to own than regular cars,” the same study revealed that EV service costs at 12 months of ownership were still 1.6 times higher than gas-powered cars.

“But a lot depends on how much coal is being burned to charge up those plug-in vehicles. And electric grids still need to get much, much cleaner before electric vehicles are truly emissions free.”

Rhea Jane Mallari, liveable cities campaigner of Greenpeace Philippines, said that “vehicles are a major source of air pollution—but this data also tells us that improving mobility in cities is a key solution to the problem.”

“Our transport systems urgently need to be reorganized so that they use energy and resources efficiently and operate without emitting harmful pollutants,” she said.

This, as the group Move As One Coalition said that in Metro Manila, 70 percent of people rely on public transportation, but they only take up 22 percent of the space. Only 30 percent rely on private vehicles, but they take up 78 percent of road space. 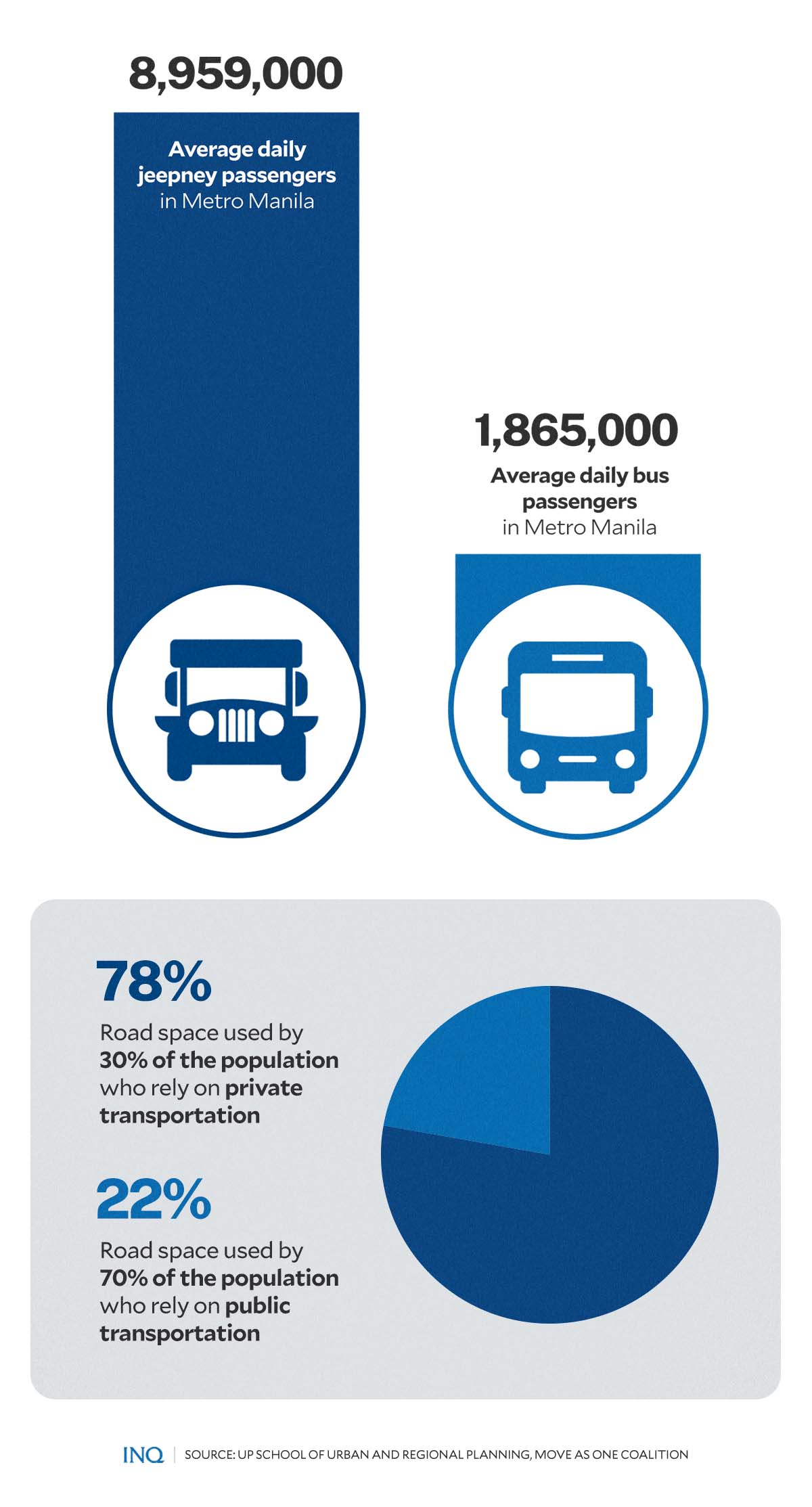 But despite this, the Move as One Coalition said that from  2012 to 2019, the number of bus and jeepney trips in the region already collapsed by 14 percent: “There has been hardly any increase in the supply of public transportation over the past decade.”

“Our cities need fewer and cleaner vehicles operating alongside greater use of public transport and widespread investments in shared mobility, walking and cycling,” Mallari said.

“Immediate policy reforms are essential to promote and encourage inclusive, sustainable and equitable mobility systems for the well-being of people,” she added.

The problem, however, is that there is no budget allocation for active transport, such as walking and cycling, in the proposed National Expenditure Program for 2023, as revealed by Rep. Raoul Manuel (Kabataan).

According to the Move As One Coalition, 20 people died in bicycle crashes in 2019 then it worsened to 36 people in 2020: “Our safety can’t wait. We need better bicycle infrastructure now.”

The most important policy shift that the government should make, the coalition said, was for economic managers to prioritize walking, cycling and road-based public transportation.

For the coalition, it is a “highly inequitable and inefficient policy” to be devoting a high share of the country’s public resources, space, and management attention to projects that prioritize car owners, who constitute “a small and privileged minority”.

From 2010 to 2021, P2.8 trillion worth of resources went to road construction, widening and maintenance while only P40 billion went to projects that will improve walking, cycling and road-based public transportation.

It proposed that the government fill a P150 billion investment gap for road-based public transportation in the next budget cycle, saying that while it is smaller than P2.8 trillion, it is “more effective”.