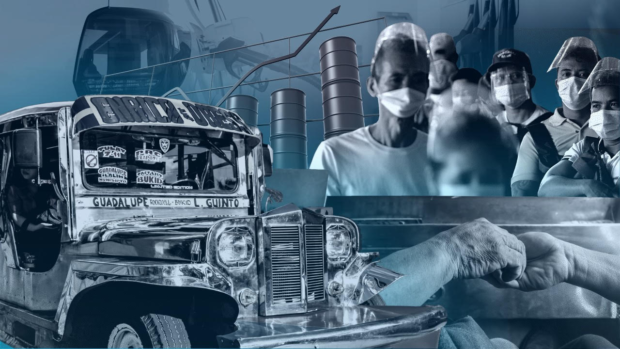 MANILA, Philippines—A quick search on Facebook of “Commonwealth Avenue commuters” would instantly give a snapshot of the reality confronted by workers every day—the need to brave Metro Manila’s traffic which eventually impacts their productivity in the workplace.

The Employers Confederation of the Philippines (Ecop) said in 2015 that traffic congestion in Metro Manila is taking its toll on the “productivity of workers and competitiveness of the enterprises.”

As the crisis even worsened, Ecop’s observation in 2015 is still the reality today, with workers saying that the transportation crisis—traffic congestion and lack of public transportation supply—is making them feel “exhausted”.

Azlee Villanueva, 23, who works for a bank in Ortigas, told INQUIRER.net that those problems are stressing her out, saying that the feeling of tiredness is really affecting her productivity every day.

This, as Villanueva, who is living in Sampaloc, wakes up at 6 a.m. every day to get to work, which she said would require an hour of UV Express ride. She stressed that if there’s a perfect transportation system, getting to Ortigas would only take 30 minutes.

Villanueva’s sentiments were shared by RB Muyano, 25, a marketing officer who takes a jeepney ride from Pasay City to get to his office in Makati City. He said it often takes 30 to 45 minutes to get to work.

The problems on transportation, he said, are taking up one-fourth of his energy during the day: “Usually, I wake up one to two hours before my shift starts just to be able to come to work on time.”

“Once I arrive in the office, I feel that I’m kind of exhausted and drained just by commuting. Most of the time, the traffic congestion adds to my stress,” he told INQUIRER.net.

The Japan International Cooperation Agency (Jica) said in 2018 that if no interventions are made in Metro Manila, the Philippines is projected to lose P5.4 billion every day.

The P5.4 billion is the economic cost of transportation—the vehicle operating cost and time spent by drivers and passengers as they traverse the region’s highly congested roads.

This, as Jica revealed that in 2014, the Philippines suffered P2.4 billion in losses daily because of the traffic congestion in Metro Manila. Three years later, it even rose to P3.5 billion every day.

While Metro Manila’s traffic congestion level eased through the years, as revealed by TomTom International B.V.—71 percent in 2019, 53 percent in 2020, 43 percent in 2021—the transportation sector is now in a “deadly spiral”.

The Move As One Coalition (Move As One), said the cost of fuel is continuously rising, drivers are losing incomes, the supply of public transportation is collapsing, commuters are experiencing longer waiting lines, and even crowded commutes.

Jica said it is working together with the Metropolitan Manila Development Authority “to identify and analyze traffic bottlenecks, develop a five-year action plan that contains sustainable solutions on traffic management, and capacity enhancement.”

Back in 2015, the Department of Labor and Employment’s National Wages and Productivity Commission said it would look into the impacts of Metro Manila’s traffic congestion on the productivity of workers.

Last year, the Social Weather Stations said the COVID-19 crisis exacerbated the difficulty of commuting in the Philippines, with 42 percent of non home-based workers saying that going to work is “more difficult today than before.”

The rest of the respondents said that going to work is “somewhat harder” because of the health crisis (19 percent), slightly harder (11 percent), while 28 percent said it is still the same as before.

Based on data from the University of the Philippines’ School of Urban and Regional Planning, millions of Filipinos are relying on public transportation to get to their respective destinations—jeepney (8,959,000) and bus (1,865,000). 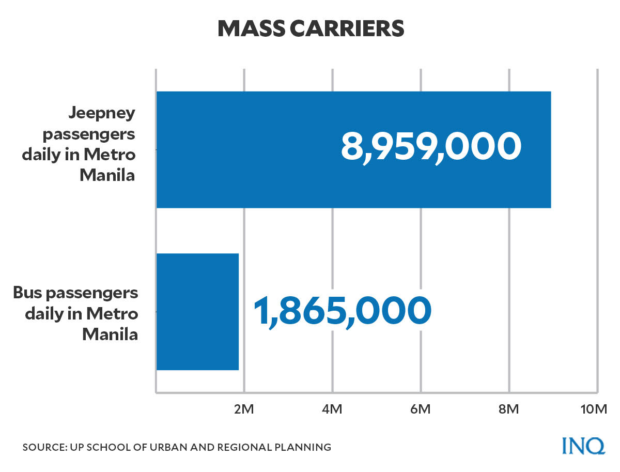 “Transportation, among other things, is an element that can help the Philippines sustain its growth and economic gains,” it stressed.

Last week, as the costs of fuel and public transportation continued to rise, Sen. Win Gatchalian asked government offices and private companies to implement flexible work arrangements, like work-from-home, saying that it will “improve” employees’ quality of life.

“Our office may look empty for some, but we’re practicing work from home arrangement to save on gas, avoid traffic congestion, save time, and eliminate daily commutes. This is the new normal, and working remotely [can be] as productive as those working in an office setting,” he said.

The website zmescience.com, citing data from research by the Dartmouth College in the United States, stressed that “our daily commute has a direct impact on our productivity and job satisfaction.”

It found that “stress, anxiety, and frustration felt by individuals during their commute can reduce their efficiency at work, increase levels of counterproductive work behavior, and lower their engagement with organizational citizenship behavior.”

The website asianefficiency.com stressed that commuting can take a toll well beyond the daily stress it causes, saying that in the United Kingdom, 18.5 percent of employees are considering leaving their current job because of a lengthy commute.

“One of the reasons employees tend to defect from jobs that require lengthy commute times is the realization that this transit time is killing their productivity,” it said while listing down five reasons why commute is killing one’s productivity.

Villanueva shared that most of the time, traffic congestion is not the only problem she’s braving. She said that since some public utility vehicle drivers already ceased plying Metro Manila’s roads because of expenses, “it’s harder to get a ride now.” 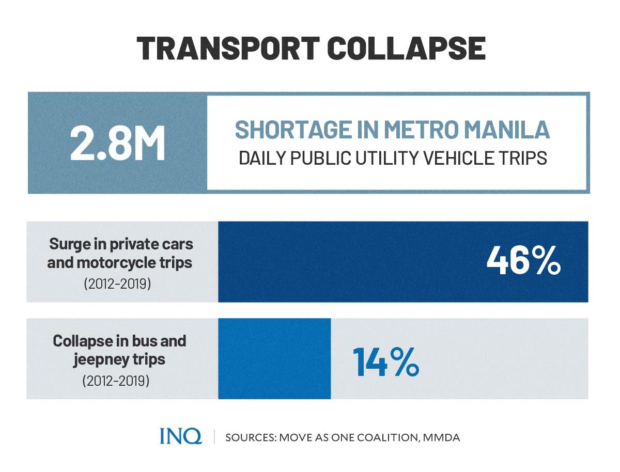 By 2030, Move As One said, the “transport supply shortage” in Metro Manila will be as high as 2.8 million daily passenger trips even if the Build, Build, Build program of the government was completed “on time.”

The coalition, which calls for sustainable mobility, explained that it was because only two percent of the P2 trillion program pipeline was dedicated to “road-based public transport investments.” 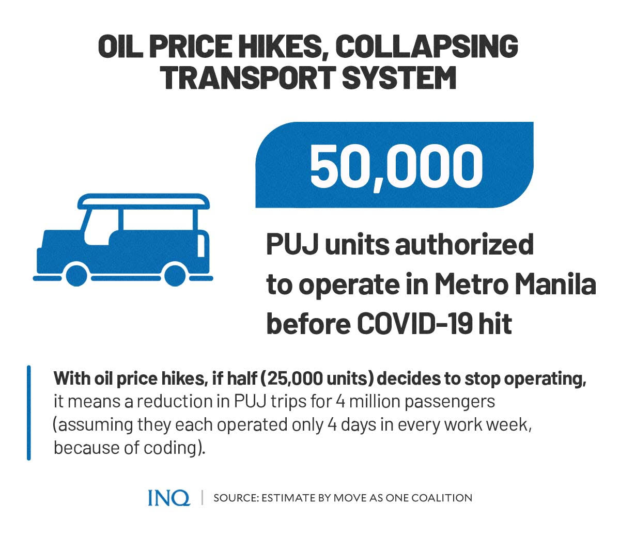 The problem does not end here, though, especially with the still existing threats of COVID-19 and the consecutive oil price hikes which, last week, saw the cost of every liter of diesel increase by P3.10; gasoline (P0.80); kerosene (P1.70).

Because of this, Move As One estimated that if half of the 50,000 PUJ units that were on Metro Manila roads before the COVID-19 crisis hit disappeared, there will be a decrease in PUJ trips for 4 million passengers.