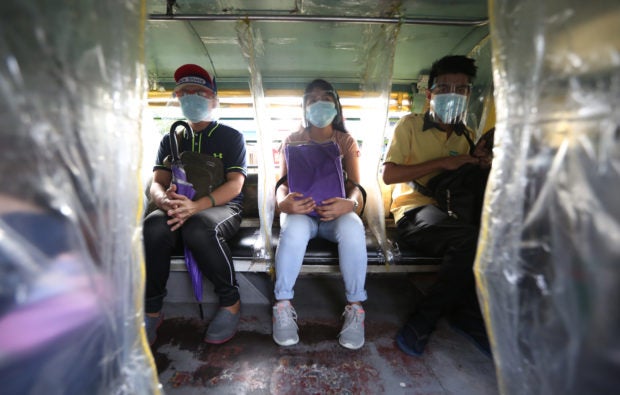 MANILA, Philippines — Commuting to work daily in the Philippines, especially in its busiest hubs, have always been a problem; however, it appears that the COVID-19 pandemic exacerbated such woes as workers believe going to work has been “very much harder” now.

According to a Social Weather Stations (SWS) survey released on Friday, 42 percent of Filipinos who are not doing home-based work said that going to work is more difficult today than before.

Other respondents of the survey said that going to work is somewhat harder due to the health crisis (19 percent), slightly harder now (11 percent), while over a fourth or 28 percent said it is still the same as before.

But the more staggering number is that around 44 percent of those who found going to work difficult have to deal with walking to their workplaces daily.

“The national Social Weather Survey of November 21-25, 2020, found 42% of non-home-based working Filipinos saying going to work is very much harder than before the Covid-19 pandemic. Forty-four percent of them walk to work,” SWS said in its report.

“Non-home-based workers were also asked, ‘What mode of transportation do you use most commonly to travel to your work?’ […] To this, 44% volunteered to answer that they walk to work, making it the most common means of getting to work,” it added.

SWS also underscored that the surveys were done last November 21 to 25, 2020, when most of quarantine restrictions were either eased or scaled down to general community quarantine (GCQ) or modified GCQ (MGCQ) due to decreasing cases.  However, despite the more open economies, public transportation was still limited to avoid crowding.

“By September 2020, although community quarantines relaxed to either GCQ or modified GCQ (MGCQ), granular lockdowns, strict local borders, and limited public transportation remained. It was during these conditions when SWS conducted its November 21-25, 2020 national survey,” SWS noted.

But contrary to belief that going to work is harder in Metro Manila due to traffic and busy transportation schemes, SWS said that it appears commuting is perceived to be the hardest in Mindanao, followed by Visayas, Metro Manila, and then the rest of Luzon.

“The percentage of those who considered going to work to be very much harder compared to pre-pandemic is highest in Mindanao (60 percent), followed by the Visayas (48 percent), Metro Manila (36 percent), and Balance Luzon (27 percent),”  SWS showed.

“The difficulty of going to work did not vary between urban and rural areas,” it added.

Commuting to work has been a hot topic even before the COVID-19 pandemic, with consumer groups and activists calling out the government for failing to address the issue.  In one occasion, activists dared then Presidential spokesperson Salvador Panelo to commute to work so that he could understand the difficulties faced by the masses.

During the survey period, all forms of public transportation had enforced reduced distancing protocols despite fears from health experts.  Still, the capacity was still not enough to cover all commuters.

Read Next
PRC shows no crisis is enough to deter them from helping
EDITORS' PICK
Nat’l leaders call on U.S. to stop military aid to Duterte
Smart celebrates all kinds of ‘#SimplyLove’ for Pride Month
Why is Duterte not bothered by the ICC report? Palace says it’s drawn from news clippings
Gilas Pilipinas beats South Korea on Belangel’s game-winner
Filipino still reeling from hate attack in Oakland
Smart brings KCON:TACT especially 4U to subscribers from June 19 to 27
MOST READ
Pacquiao ‘good choice’ as PDP-Laban standard bearer for 2022 – Koko Pimentel
Duterte says face shields for hospital use only — Sotto
‘Show you’re worthy of your post,’ Pacquiao tells Cusi at Senate energy probe
DepEd chief Briones lying, teachers insist
Don't miss out on the latest news and information.