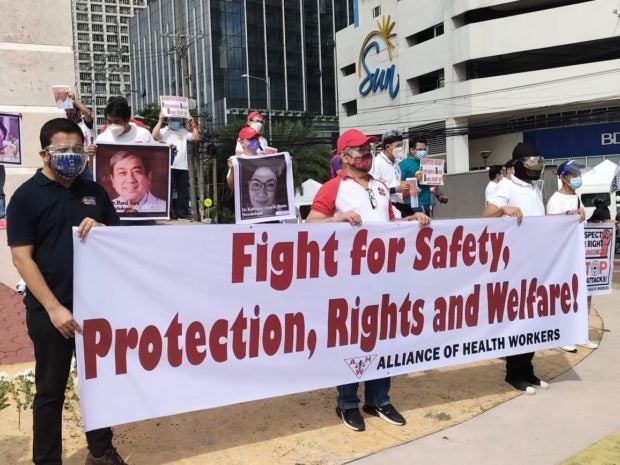 MANILA, Philippines — As the nation observes May 7 as health workers’ day, a group of medical frontliners criticized the government for allegedly not paying enough attention to their appeals.

The Alliance of Health Workers (AHW) has lamented how doctors and nurses and other staff in the medical field are being praised as heroes in this time of the COVID-19 pandemic but whose pleas for better working conditions, among others, are allegedly not being heard by the government.

According to AHW, medical practitioners and health center staffers are suffering from a myriad of problems such as low wages, unpaid benefits, and inadequate protection.

“We, health workers, are being called as the ‘modern-day heroes’ and yet our voices are not heard,” AHW Philippine Heart Center chapter president Salome Ejes said in a statement on Friday, the National Health Workers’ Day.

“We gather and unite today as this is the most significant and appropriate day to promote our rights and welfare as we play an important role and contribution in providing vital health services to the Filipino people,” she added.

Earlier, health workers from various hospitals staged a motorcade rally from Welcome Rotonda to Mendiola to once again try to send a message to the government about their requests. According to AHW, a lot of their requests have not been attended to even as they tried to set a dialogue with President Rodrigo Duterte, and eventually talk with the Department of Health (DOH).

“The two meetings we had with the DOH were unfruitful. No substantial gains were achieved to the pertinent issues we raised. DOH pointed out problems with the Department of Budget and Management (DBM) and thus our concerns were not really addressed,” said AHW’s Tondo Medical Center chapter president Ernesto Bulanadi. 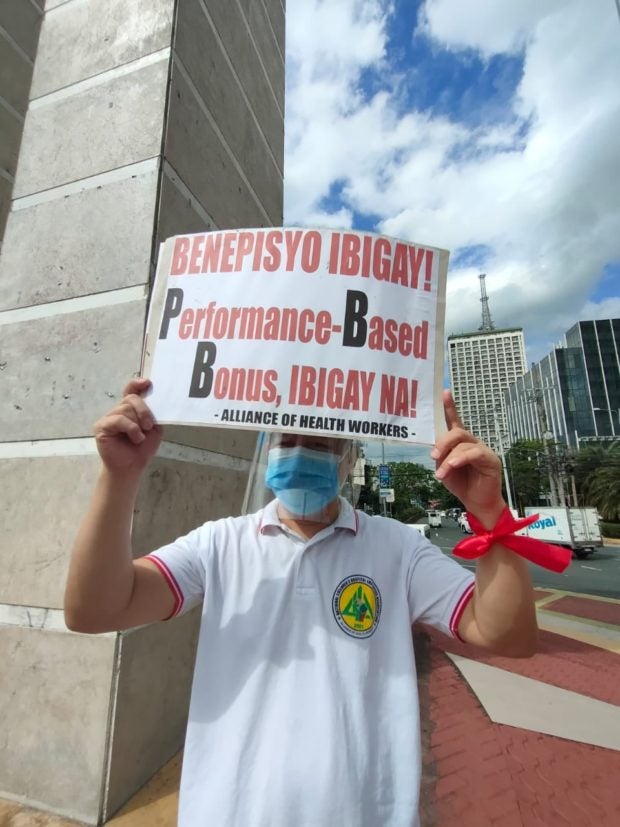 “Due to the non-resolution of our issues and concerns with the DOH, we decided to send a letter to President Duterte, last May 3, 2021, requesting for a dialogue today.  We believe this is the most significant day we could meet with the President to help resolve our lingering issues, problems, and demands for safety, protection, rights, and welfare,” he added.

Among the things that AHW is asking, aside from proper compensation and benefits, is the fixing of the country’s healthcare system as health workers are tired from bearing the brunt of COVID-19 surges.

Recently, medical facilities in Metro Manila and nearby provinces that were placed under stricter lockdown measures saw hospital occupancy spilling out — with some patients forced to wait inside makeshift tents or worse, sleep along the driveway of a medical facility just to get treatment.

READ: Some NKTI patients lie on the ground, sleep in the open due to occupancy surge

AHW is also asking for medical supplies — both for them and the patients — to avoid a collapse of the healthcare system. But more importantly, they are seeking answers to why health workers are being subjected to red-tagging activities, as they have been accused by government officials of being a part of communist groups’ legal fronts.

“As the health care system is now on the brink of collapse, health workers are becoming more and more depleted, demoralized, and burned-out.  Many have resigned, filed an early retirement because of fear of getting infected with COVID-19 and be the source of infection to their families and communities,” the group said.

“PPEs, medicines, medical equipment, and supplies, as well as quarantine facilities, remained scarce. Worst, if the health workers voiced out their grievances; the state security forces like NTF-ELCAC through Usec Lorraine Badoy red-tagged and branded them as terrorists,” it added.

Ejes said they are disappointed with Duterte’s supposed lack of concern over their efforts. 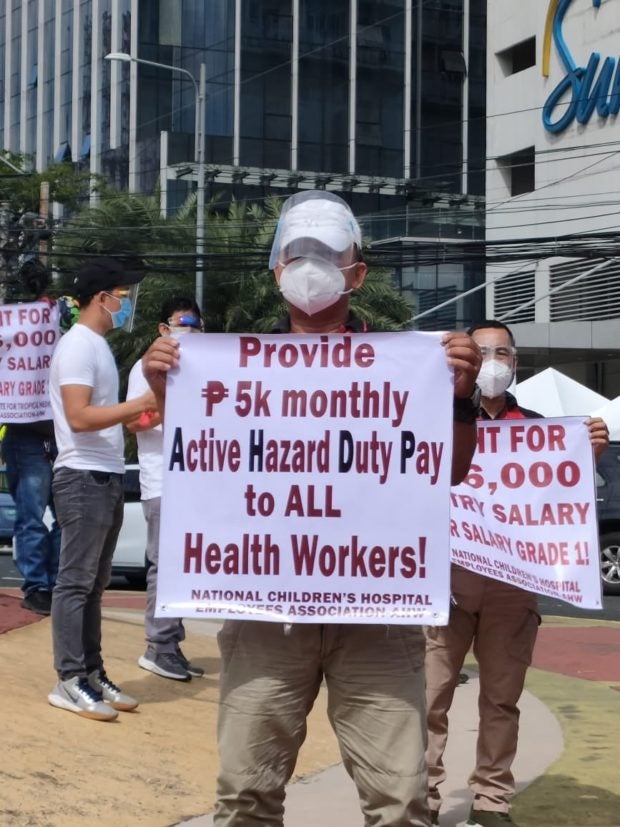 “If President Duterte, truly recognizes us as heroes, beyond recognition over our heroic efforts, we appeal that he must address our concerns and demands for just benefits, mass hiring of health workers, safety, protection, rights and welfare and not to wait before it’s too late, because the modern-day heroes can no longer combat and fight the pandemic because they are already depleted,” she claimed.

AHW president Robert Mendoza said that while they hail every health worker who has put their foot forward despite the threat of the pandemic, their push for better conditions would not stop on National Health Workers’ Day.

“The real heroes are those health workers who bravely, selflessly, and wholeheartedly continue rendering health services to the Filipino people with the highest degree of responsibility, efficiency, and with a sense of deep humility and great pride,” Mendoza said.

“But, our fight does not end with just commemorating Health Workers ’Day. Rather, our fight for safety, protection, rights, and welfare is an arduous and long-lasting one. Let us promise ourselves that we will continue our fight until we achieve our victory,” he added.