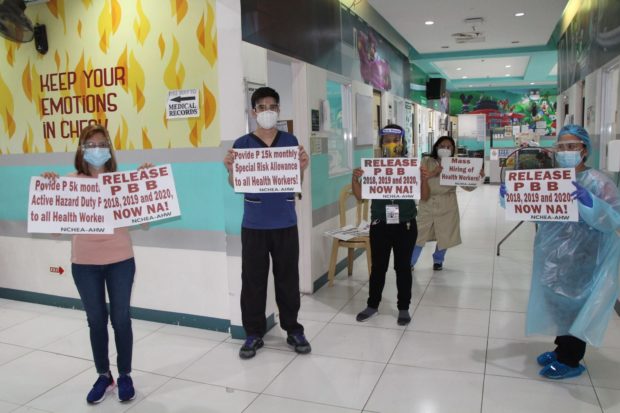 LOOK: Health workers from different public hospitals staged a simultaneous noise barrage and protest from wards on April 16 to demand the immediate release of withheld benefits and urgent mass hiring of health workers to handle COVID-19 patients. Image from AHW

MANILA, Philippines — Health workers were dismayed after their request for a dialogue with President Rodrigo Duterte was instead referred to the Department of Health (DOH) and the Inter-Agency Task Force for the Management of Emerging Infectious Diseases (IATF).

According to the Alliance of Health Workers (AHW), they were led to think that the President was willing to sit down with medical frontliners to talk about the dire conditions at their workplaces due to the COVID-19 pandemic, taking after the statement of presidential spokesperson Harry Roque.

The group was however surprised to find out that their request had instead been turned over to the DOH and IATF, the two agencies at the forefront of the fight against the pandemic.

“We are extremely dismayed with the negative response to our letter by saying that, ‘the request is being referred to the DOH and IATF for appropriate action.’ We thought the President is willing to have a dialogue with us based on what Presidential Spokesperson Harry Roque’s pronouncement to the media last April 6, 2021,” AHW National President Robert Mendoza said.

“But why, we are being referred now to DOH and IATF? This action taken by the Office of the President in our letter is completely disappointing and unacceptable to us health workers,” he added.

Last Tuesday, AHW said in a separate Facebook post that they have formally sent out a letter request to the Office of the President so that they could talk to Duterte about their grievances, including low wages, burnout from work due to the COVID-19 surge, and the non-issuance of benefits for some health workers.

Members of the group were hopeful as they cited Roque’s affirmation of possible talks between the health workers and Duterte, as stated in a televised news report.

Mendoza said that the problem was that they have also tried to talk with the DOH, but found their pleas falling on deaf ears.

“We already have exhausted all the avenues, we went back and forth to the DOH to have a dialogue with DOH Secretary Duque regarding the deplorable conditions of health workers including benefits and understaffing but nothing happened,” Mendoza further said.

According to Mendoza, the actual reason why they sought an audience with the President was that DOH’s replies were unclear and not concrete.

“In fact, we were handed over to the management of respective hospitals wherein they have different justifications, but most of them did not provide health workers their intended benefits,” he noted.

“Aside from the fact that he does not speak to us personally, the responses were not clear and concrete especially on the issues and concerns of the health workers protection, safety and well-being. So, we decided to set a dialogue with the President,” he explained.

AHW Public Relations Officer Eleazar Sobinsky said that Duterte should have taken the meeting with the health workers as this would be a key factor on how the country can beat the pandemic — as the whole healthcare system would falter if frontliners’ urgernt demands are not heeded.

“President Duterte should have decided on this or else, the efforts of health workers to best improve the quality of services to patients and on improving their working condition, welfare and well being will come to a naught,” Sobinsky said.

“What’s the point of calling us modern day heroes, if we cannot feel the sincerity of support and protection for our safety to combat the virus? Or is the current government deliberately pushing us to become modern day slaves?” he asked.

Health workers have been burdened with the responsibility of lifting the country out of the COVID-19 pandemic, but they have also called for several timeouts to recuperate, as there were instances that medical workers and staffers were getting sick too.

Aside from the technical issues mentioned earlier, health workers — especially those from Metro Manila and nearby provinces — have been overwhelmed by the surge in COVID-19 cases.

The COVID-19 bulletin released earlier also showed 145 new deaths due to the disease, bringing the death toll to 15,738.  In terms of COVID-19 bed capacity in Metro Manila, 84% of intensive care unit beds have been utilized while 63% of isolation beds are occupied.