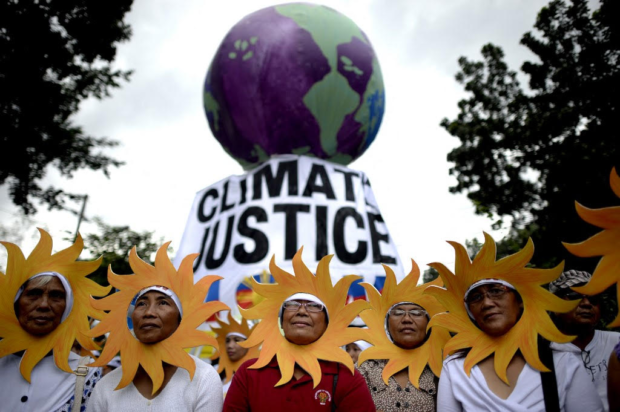 MANILA, Philippines—As the Philippine delegation joins the rest of the world in a key climate conference in Scotland, some important sets of numbers are tucked in its waist—157.6 million, the amount in metric tons of greenhouse gas that the country emitted in 2012 which was 0.33 percent of worldwide total and a 53 percent increase from levels in 1990.

The group Greenpeace Philippines said it hoped the Philippine team in the 26th Climate Change Conference of Parties (COP26) will aggressively push for the Philippine commitment to stop further global warming before the world reaches the point of no return.

COP26 started last Sunday (Oct. 31) and has been described as the world’s deadline before the climate catastrophe, which is now wreaking havoc everywhere, becomes irreversible.

Virginia Llorin, Greenpeace Philippines campaigner, said while the group trusts that the Philippine delegation would highlight Filipinos’ demands for “climate justice,” it should take the initiative to hold companies responsible for the climate crisis “accountable.”

The Philippines, one of the nations “highly at-risk” from the effects of the climate crisis, will have Finance Secretary Carlos Dominguez III as head of delegation to COP26, which will be held from Oct. 31 to Nov. 12 in Glasgow.

Amid criticisms, especially from teen climate activist Greta Thunberg, that conferences like COP26 result only in talk, it brings together leaders of the world to try to commit to common goals in stemming climate change through the UN Framework Convention on Climate Change.

Dominguez, the Department of Finance (DOF) said, will highlight actions taken by the Philippines to fight climate change and demand “greater accountability” from Western nations which “contributed and continue to contribute” to climate destruction.

Greenpeace Philippines said quick action on climate change was imperative and calls for climate justice should go along the phaseout of fossil fuels, a major source of carbon and methane emissions.

The United States Agency for International Development’s (USAID) ClimateLinks said that the Philippines, in 2012, contributed 157.6 million metric tons of carbon dioxide emissions—0.33 percent of global emissions. This was a 53 percent increase from 1990. 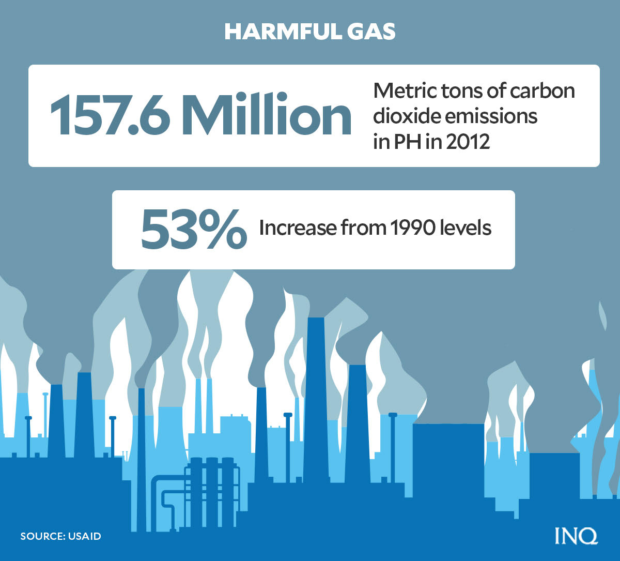 The 75 percent commitment was part of the Nationally Determined Contribution (NDC) of the Philippines, but Greenpeace Philippines said most of the “pledge” was conditional—through external assistance—while only 2.71 percent is not conditional – through local resources. 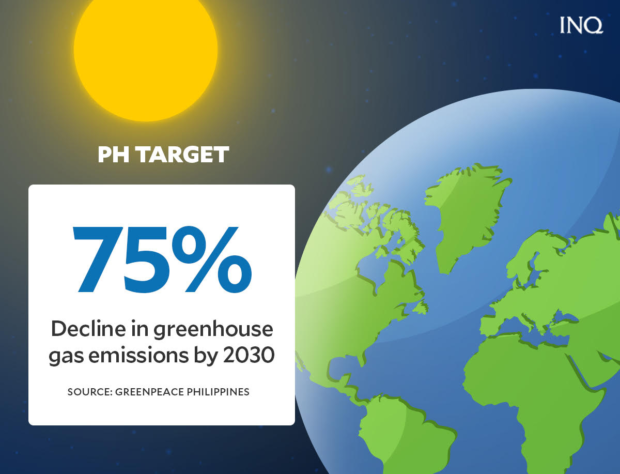 When the NDC was presented, the group Power for People Coalition said the 2.71 percent of the target that does not hinge on any conditions was “negligible,” explaining that despite having “high mitigation potential,” Philippine officials still turn a blind eye on climate realities.

Greenpeace Philippines said that the government’s climate leadership “needs to be more than lip service,” believing that the Philippines has the potential to do more and to take the high ground in mitigating greenhouse gas emissions.

COP26, which Greenpeace Philippines described as the most significant global climate conference so far, is the “deadline” for governments to give their plans to lessen emissions that would help the world hit its target of keeping global warming below 1.5 degrees Centigrade. Commitments are not enough, though, said Greenpeace Philippines. 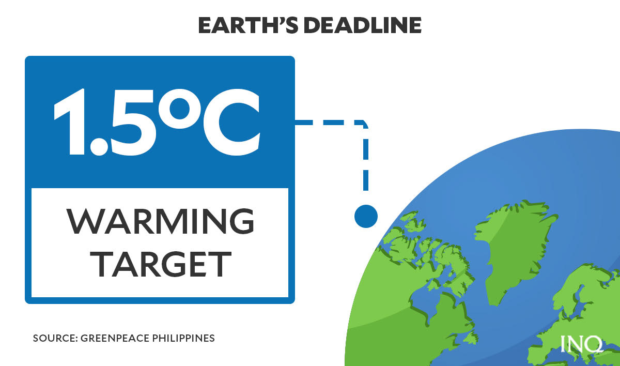 The latest UN report which synthesized the pledges of nations revealed that with the current level of commitments, a 16 percent increase in emissions will happen by 2030 compared to 2010 and may lead to a 2.7°C rise in global warming “by the end of the century.”

The UN said that global warming “induced by humans” has already caused “multiple observed changes in the climate system” which included increases in both land and ocean temperatures, as well as more frequent heat waves in most land regions. 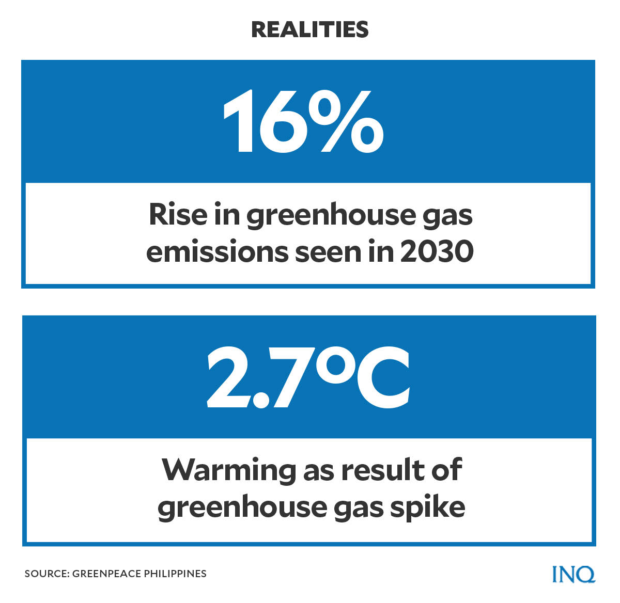 Greenpeace Philippines said that the COP26 is significant, especially for Filipinos who are one of the most vulnerable to the effects of the climate crisis, explaining that millions of Filipinos are already suffering losses and disruptions in lives, livelihood and dignity.

The DOF said that “climate-induced hazards” already cost the Philippines P463 billion in infrastructure alone from 2010 to 2019. In 2020, the damage reached P113.4 billion. 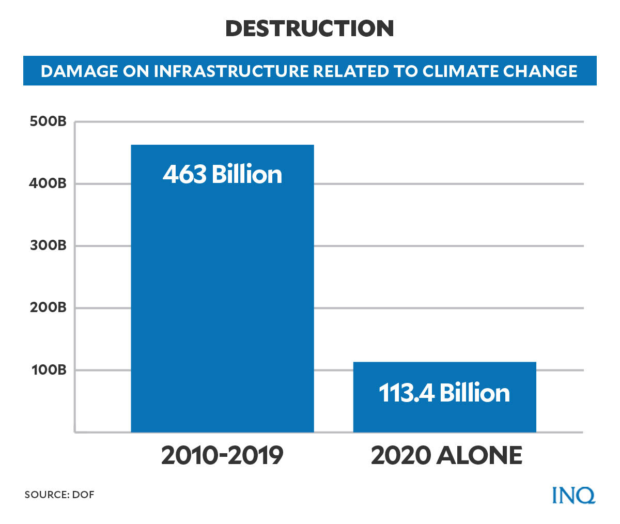 The Philippines currently has the Sustainable Finance Roadmap and its Guiding Principles as “primary blueprint” as the nation transitions to a low-carbon and climate-resilient society.

According to the DOF, the Sustainable Financial Roadmap program was crafted in partnership with the United Kingdom and in the implementation of the Low Carbon Energy Programme for the Association of Southeast Asian Nations (Asean).

It aims to “address policy and regulatory gaps in promoting sustainable investments through finance, implementing sustainable government initiatives, facilitating investments in public infrastructure and developing projects that promote sustainable financing in the Philippines,” according to the DOF. 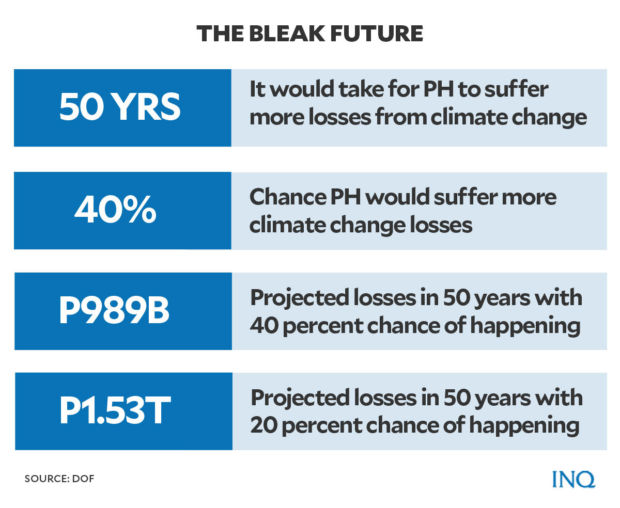 Last June, Dominguez said climate literacy would be the greatest defense against climate change, saying that there was an exigent need to spread public awareness over the need “to take immediate action in ending the worsening environmental crisis.”

Greenpeace Philippines said that while it hoped that the Philippine delegation would take a strong stance, “we also need this to be supported by genuine climate action back home.”

“The Duterte administration still has time to put in place green recovery measures from COVID 19, strengthen the coal moratorium announcement by actual cancellations of planned coal facilities, aim for 50 percent RE (renewable energy) by 2030, and protect and restore ecosystems to build resilience,” the group said.

RELATED STORY: Climate finance could make or break the COP26 summit. Here’s why