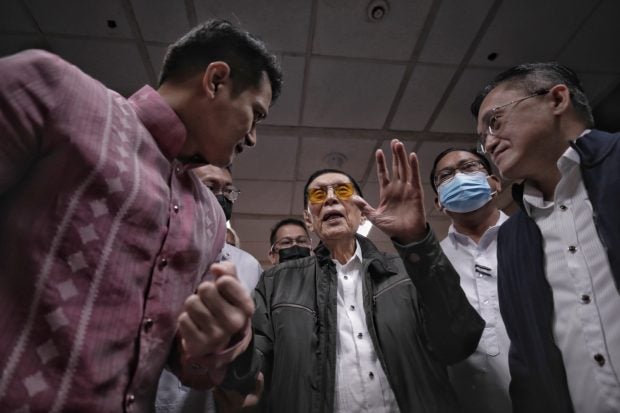 Chief Legal Counsel and former Senate President Juan Ponce Enrile returns to the Senate as a resource person of the Committee on Constitutional Amendments and Revision of Codes during the resumption of the hybrid public hearing on legislative measures calling for a review of the provisions of the 1987 Constitution Wednesday, September 21, 2022. (Voltaire F. Domingo/Joseph Vidal / Senate PRIB)

During the Senate committee hearing on constitutional amendments and revision of codes on Charter change proposals, Enrile claimed that then President Corazon Aquino intentionally removed the ground for martial law from the 1987 Constitution.

As the Constitution state, the president may declare martial law “for a period not exceeding 60 days in cases of rebellion and invasion, when public safety requires it.”

When Senator Robin Padilla, the panel’s chair, asked Enrile if he supports bringing back “imminent danger” as a justification for imposing iron rule, Enrile said yes.

(They purposely wanted to take control over the Philippine Constitution, because their goal was to enfeeble and take over the power of the Republic of the Philippines. Nothing more, nothing less.)

He added that this showed what kind of leader Aquino was by eliminating one of the legal grounds for calling martial law.

(Only in times of war, when police and military are being targeted, is martial law justified, as Cory implied.)

(If you see that your country is in danger of invasion or of being destroyed by insurrection or rebellion, you should do something. You have to use your iron fist to stamp out these problems, and so that no person will die or be taken advantage of just because you were lazy or scared of making a decision.)

(They were scared. Since we caught all of those groups, the communist movement went by like a storm.)

Aquino, however, later freed the rebels they had captured.

Padilla asked Enrile why some people do not see the wisdom of declaring martial law then, especially those in prestigious schools. Enrile explained that the government was only working silently.

(We weren’t noisy about it. We were just quiet. We let them reign over the country. But in one night, we conducted our operations. We caught them all. We shut down the entire Philippines and controlled all forms of communication. Also, I sequestered the TV stations.)

Enrile said even religious radio stations were shut down because the government “totally immobilized the entire country.”

Iron-fisted practices he cited before the panel included curfews and the confiscation of firearms.

Despite maintaining that the youth do not owe their freedom to martial law, Enrile expressed the belief that martial law preserved their individual freedom.

The figure covers only those whose compensation claims were approved by the Human Rights Act of 2013.
Amnesty International reported that between 1972 and 1981, 70,000 people were imprisoned, 3,257 were killed and 34,000 were tortured, while the Families of Involuntary Disappearances said 878 disappeared.