During the hearing of the Senate committee on constitutional amendments and revision of codes on Charter change proposals, Enrile expressed belief the 1935 Constitution was the best among the versions of the Philippine Constitution that he was able to witness through the years as he noted that it was “brief, simple, and easy to understand.”

Enrile later spelled out his suggestion to “go back to the 1935 Constitution or at the very least, if we want to change it immediately, go to the 1973 Constitution.”

“I would suggest as among the matters that you have to look into is the number of senators that we must have,” he added.

In the 1935 Constitution, 24 senators were elected and divided into three groups – the first would serve a six-year term, the second would be allowed a term of four years, while the third group, for two years.

“Binago iyan ng 1987 Constitution. Twenty-four [senators] pero one half of the members must be elected every six years. Delikado iyan. They didn’t understand why, under the 1935 Constitution, the wise men of the Philippines – kung sino-sino diyan na magagaling ang utak – ginawa nilang 24 but every two years, exposed to the mandate of the people [ang] eight of these 24 people and 16 will remain standing all the time,” he said.

(This was changed under the 1987 Constitution, still with 24 senators but one half of the members must be elected every six years. This is dangerous. They didn’t understand why, under the 1935 Constitution, the wise men of the Philippines – those with great minds – they made it 24 but every two years, eight of them would be exposed to the mandate of the people, while the 16 others would remain standing all the time.) 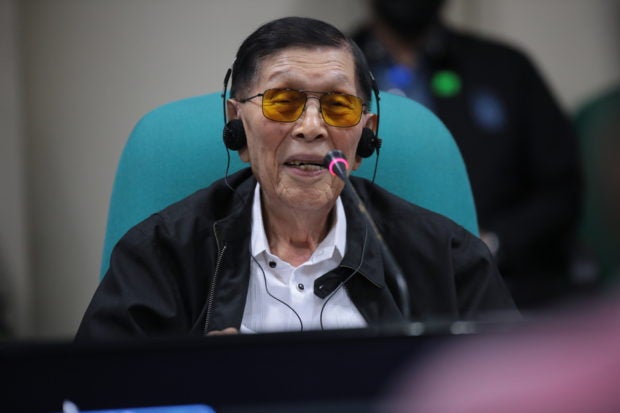 ENRILE BACK IN SENATE: Chief Legal Counsel and former Senate President Juan Ponce Enrile returns to the Senate as a resource person of the Committee on Constitutional Amendments and Revision of Codes during the resumption of the hybrid public hearing on legislative measures calling for a review of the provisions of the 1987 Constitution Wednesday, September 21, 2022. Enrile shared his views on the declaration of martial law during the time of former President Ferdinand Marcos, Sr., saying it was done to deter the rise of communism in the country. (Voltaire F. Domingo/Joseph Vidal / Senate PRIB)

This, according to Enrile, was to “ensure that two-thirds of all the senators must be in place at any given time without any interregnum.”

He also recommended that the number of senators be adjusted based on the current population of the country.

“At the time of the adoption of the 1935 Constitution, we were only 12 million people. Now, we are more than 100 million people. If we are going to increase the number of senators, I would suggest that we double the present number. From 24 to 48 and of that 48, 16 will go out every two years to be elected by the people, so that new, fresh and modernized minds will enter the system to contribute to the intellectual capability or the academic capability of the remaining members,” Enrile explained.

The 1987 Constitution, which was earlier lambasted by Enrile, is the transitional charter drafted by the constitutional body appointed by the late former Pres. Corazon Aquino following the ouster of the late dictator Ferdinand Marcos Sr.

Monsod: Constitution is not the problem, it’s part of the solution