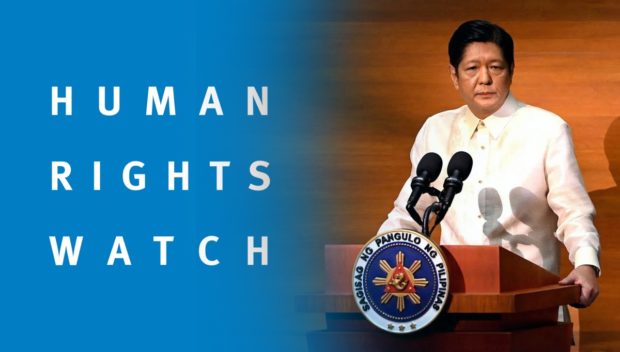 The international human rights group’s Deputy Director for Asia Phil Robertson issued a statement following Marcos’s promise to tackle the country’s illegal drug problems in a new way, saying that it “glosses over the urgent need to first issue a clear public order ending the ‘drug war’ in toto.”

READ: Marcos on death penalty: Does society have the right to kill its own people?

“Using a drug rehabilitation approach means little when police and mystery gunmen are still executing suspected drug users and dealers. Law enforcers should receive clear orders to stop the “drug war” enforcement once and for all,” said Robertson.

Robertson said that HRW and the University of the Philippines’s Third World Studies Center have found that the drug war violence that started under former President Rodrigo Duterte continues under Marcos’ administration.

“Human Rights Watch has always advocated for a community-based drug rehabilitation program that considers the health and well-being of drug users. Unfortunately, Marcos’ drug rehabilitation initiatives are punitive and designed first and foremost to incarcerate those suspected of drug use,” stated Robertson.

Robertson pointed out that current government initiatives that tackle the country’s illegal drug trade problem still operate under the drugs watch list that Duterte made.

“These drug watch lists are arbitrary, the names are gathered without any semblance of due process, and those listed find it difficult to get clean, and remove their names,” said Robertson.