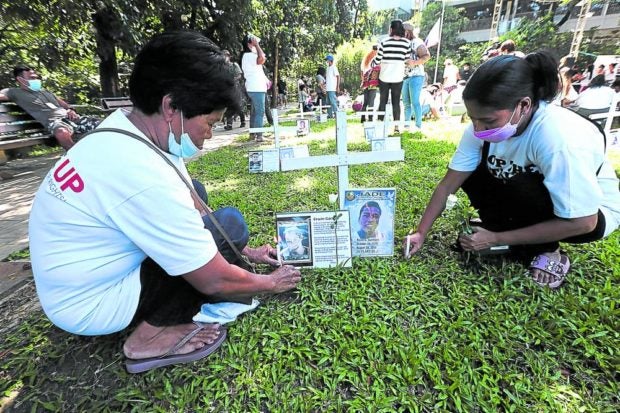 MANILA, Philippines — As the United Nations Human Rights Council (UNHRC) convened this week for its 51st session, rights and civil groups in the Philippines called on the 47-strong council to recognize the persistence of human rights violations here and to adopt stronger action to compel the Marcos administration to address the dire situation.

Among others, they urged the council to issue a new, strong resolution that would expand the ongoing UN Joint Program (UNJP) between the government and the Office of the High Commissioner on Human Rights (OHCHR), and to urge Mr. Marcos to unequivocally end the war on drugs and to form a truth commission that would gather testimony from witnesses and victims.

“UN member states should make sure they don’t drop the ball on the Philippines and instead strengthen the UNHRC efforts to improve human rights in the country,” Lucy McKernan, Human Rights Watch deputy director for the UN, said in a statement on Monday.

“Filipinos who suffered the most during the Duterte administration are looking to the Human Rights Council to help them achieve justice for themselves and their loved ones,” she added.

During the 51st session, the UNHRC is expected to, among others, discuss the progress of the ongoing UNJP rooted in an October 2021 HRC resolution calling for technical support and capacity building to improve the Philippines’ human rights situation.

Before this, the OHCHR had flagged a culture of impunity in the country after thousands were killed under former President Rodrigo Duterte’s brutal war on drugs.

While they admit that the joint program was a good way forward and should be continued, “we will have a problem if no follow-up resolution is done by the UNHRC,” said Rose Trajano, chair of iDefend, one of the civil groups involved in the UNJP.

She also noted that there has been “no improvement” in the human rights situation in the country, as killings, arbitrary arrests and disappearances continue to intensify even under the new administration.

The program, which was given a P10-million fund and was to run for three years, sets concrete milestones and indicators that the Philippines must observe.

However, the civil groups involved in the program noted that there is a lack of clarity and transparency in the overall status of the program.

Tinay Palabay, Karapatan secretary general, said the government seems to resist several parts of the program, including the baseline numbers against which the reduction rates were to be measured.