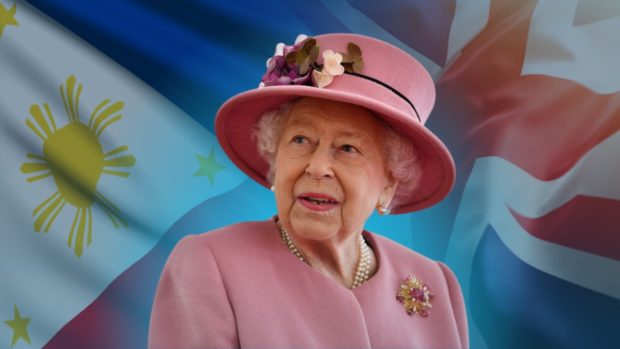 MANILA, Philippines—Queen Elizabeth II, the United Kingdom’s (UK) longest-serving monarch, has died at age 96. Throughout her 70-year reign, the Queen has made connections with the Philippines and the Filipino people.

Buckingham Palace announced the Queen’s death in a statement on Thursday (September 9)—hours after her family was seen rushing by her side at her beloved Scottish home, Balmoral Castle, when doctors expressed concern about her health.

“The Queen died peacefully at Balmoral this afternoon,” the statement read.

“The King and The Queen Consort will remain at Balmoral this evening and will return to London tomorrow,” it added.

Queen Elizabeth II, whose reign spanned 15 British prime ministers, came to the throne when she was just 25 following the death of her father, King George VI, on February 6, 1952. She was the world’s oldest and longest-serving head of state.

As the Royal Family, the UK, and the rest of the world mourn the passing of Queen Elizabeth II, INQUIRER.net looks back at the ties and connections between the late British monarch and the Philippines.

Over the past decades, Queen Elizabeth II has awarded high honors to several Filipinos for their outstanding service to the British community.

A few months ago, on July 13, Queen Elizabeth II awarded the George Cross to the state-run National Health Service (NHS) for its work over the past 74 years. The Queen presented the medal to health leaders—including Filipino-British nurse May Parsons.

Parsons, aside from fighting at the frontlines against COVID-19, administered the world’s first shot of the COVID vaccine.

The George Cross is the highest award bestowed by the British government on non-operational gallantry or gallantry not in the presence of an enemy.

According to the Encyclopedia Britannica, it was instituted in 1940 by King George VI for “acts of the greatest heroism or of the most conspicuous courage in circumstances of extreme danger.”

Last year, Charito Romano, a staff nurse at the Arbrook House Care Home in the UK, was among the recipients of the Medal of the Order of the British Empire in Queen Elizabeth II’s New Year Honours List 2021.

Romano, along with her fellow health care workers, has worked tirelessly to ensure that no one at the Arbrook House Care Home would contract SARS-CoV-2, the virus which causes COVID-19.

From March to December 29, 2020, the private nursing home was declared COVID-free.

“I am sharing this award with all my colleagues and to the whole Arbrook team. If not for them, I will not be able to have this award. It is a team effort,” Romano had said.

In 2020, the Queen also awarded the British Empire Medal to Filipino nurse Minerva “Minnie” Klepacz in recognition of her “tireless work to support her colleagues and the community” during the COVID pandemic.

“This award is not just for me, it’s for everyone who works here and goes above and beyond. As a Filipino, I’d also like to share this award with all staff from a BAME background. I’m truly humbled to work with amazing colleagues. They inspire me and give me confidence,” Klepacz told UHD NHS Foundation Trust.

The British Empire Medal is awarded for “hands-on” service to the local community—which could be a long-term charitable or innovative work of relatively short duration (3 to 4 years) that has made a significant difference.

Ongcachuy, who works at The Royal London Hospital, has been conferred the Officer of the Order of British Empire (OBE) for her crucial role in responding to and treating victims of the London Bridge terrorist attack in 2017.

The OBE is the second-highest ranking Order of the British Empire Award given to someone for making a great impact in their line of work.

Quetevis—who has served as driver for several British envoys to the Philippines—was awarded the British Empire Medal for his 33-year service at the British Embassy in Manila. 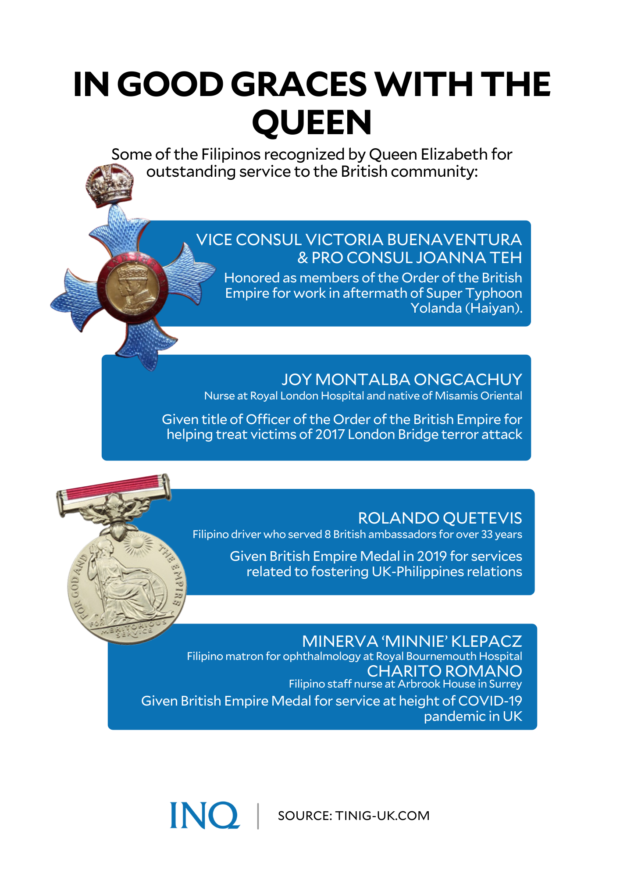 Aside from having been the official driver to eight British ambassadors, Quiteves said he was also able to drive for some members of the British royal family—including Prince Andrew, Duke of York; Princess Anne; and Prince Charles (now King Charles) III.

Over seven years ago, two Filipino consular officers at the British Embassy in Manila received high honors from Queen Elizabeth II for their exemplary work in the aftermath of Super Typhoon Yolanda (Haiyan).

Vice Consul Victoria Buenaventura and Pro-Consul Joanna Teh have been recognized for showing “courage, resilience, and professionalism” amid the calamity as they helped assist British nationals in the Philippines who had been affected by the typhoon.

Queen Elizabeth II and her son, Charles, have also hailed and acknowledged the contribution of Filipino nurses and health care workers in the UK’s health sector.

“We are fortunate to have many nurses from the Philippines in the National Health Service,” the Queen said in her message to then-President Rodrigo Duterte in celebration of the 75th anniversary of diplomatic relations between the UK and the Philippines.

The Queen said Filipino nurses bring “exceptional care and comfort to their patients.”

“I wanted to express my sincerest gratitude for their work, especially in response to the coronavirus,” the Queen added in a statement coursed through the British Embassy in Manila.

Last June, a month before the Queen’s message for the 75th anniversary of diplomatic relations between the UK and the Philippines, then still Prince Charles expressed his “most heartfelt” gratitude to Filipino health care workers in the UK, who he described as “wonderfully selfless people.” 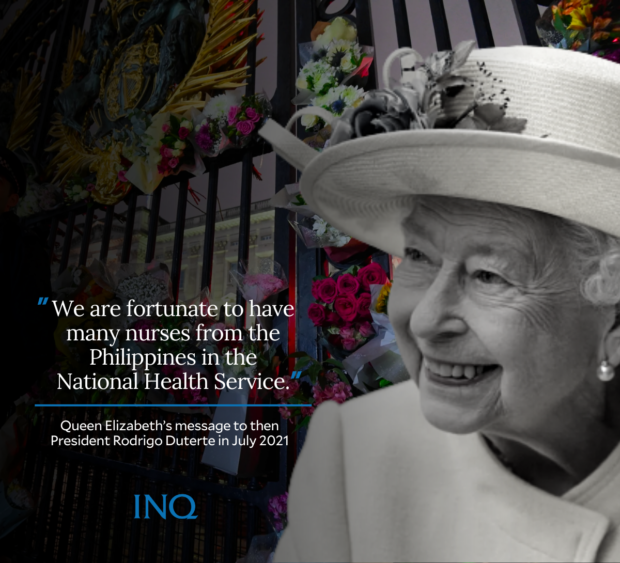 “We are more fortunate than we perhaps realize to have many thousands of nurses and other health care workers from the Philippines working in the United Kingdom, particularly in the National Health Service. To these wonderfully selfless people, I wanted to offer my most heartfelt gratitude for the outstanding care and comfort you give to your patients,” he said in a special message to the Philippines in celebration of the Queen’s 95th birthday.

The Philippines and the UK established formal diplomatic ties on July 4, 1946, and “have worked tirelessly to foster stronger political, economic, cultural, and people-to-people ties,” according to the Philippines Embassy in London.

According to a report published on the University of Bristol’s website, there are around 40,000 Filipino nurses working in the UK as of 2021.

A March 2019 report on the NHS’ workplace diversity found that at least 19,000 Filipinos serve the UK’s public health system either as medical professionals—nurses and allied health professionals—or as support staffers.

Ties with the Royal Family

Aside from the Filipinos who have received high honors and various awards from the Queen, there is one Filipina who has had a close relationship with Queen Elizabeth’s grandsons, Prince William and Prince Harry.

Royal nanny Araceli “Lillie” Piccio made headlines in 2011 when she received an invitation to the royal wedding of Prince William and Kate Middleton. 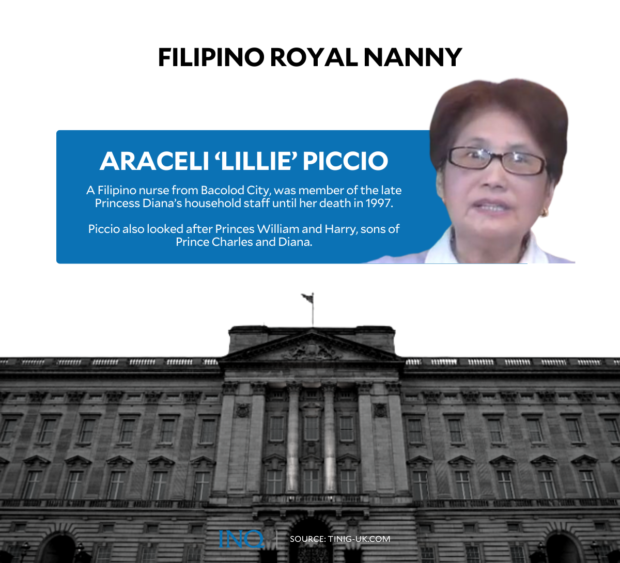 According to a report published in the Philippine Star in March 2011, Piccio—called “Miss Lillie” by the late Lady Diana, Princess of Wales—is a nurse from Bacolod who was a member of Lady Diana’s household staff for eight years until Diana’s untimely death in 1997.

Piccio was also one of the three royal nannies who took care of Prince William and Prince Harry.

“I cried at the wedding. It was both a happy and sad occasion for me,” Piccio told the Philippine Daily Inquirer in a telephone interview. She also shared that Prince William thanked her twice for coming to his wedding.

She added that the Prince, along with his bride, came to her and gave her a kiss upon seeing her at the reception at Clarence House.

“The princess (Lady Diana) would have been so proud of him,” she said.

In April 1980, the Queen’s sister, the late Princess Margaret, made a state visit to the Philippines and was welcomed by then-first lady Imelda Marcos at the airport. 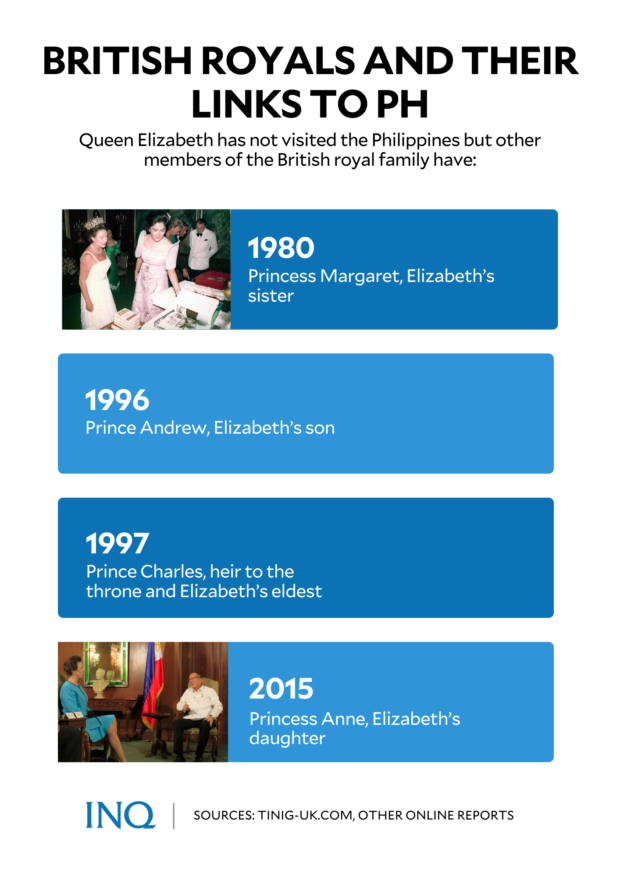 During her stay, she attended the inauguration of the Philippine Children’s Medical Center. Some photos and accounts of the visit also showed that the Princess stopped by Jose Rizal’s tomb at the Rizal Monument in Manila.

The Princess also viewed locally-made handicrafts before attending an Official Dinner at the Malacanang Palace held in her honor—which was hosted by the then-first lady.

In 1997, following Hong Kong’s turnover to China after 156 years of British colonial rule, Charles left for an official yet brief visit to Manila. According to then British Ambassador Adrian Thorpe, the visit signified that Britain still wanted to have a “strong commitment” to Asia, even after the turnover.

“The Britannia got a warm welcome in Manila, with a 21-gun salute. President Fidel Ramos ordered a special cleanup of the stretch of polluted Manila Bay where the yacht docked,” a report published by the Associated Press on July 3, 1997, wrote.

Upon arriving at Malacanang Palace, Prince Charles—who was not scheduled to make public statements during his 10-hour visit to Manila—signed the Malacanang guestbook and was presented with a tarsier by then tourism secretary Mina Gabor.

Prince Andrew, Duke of York, went to the Philippines in 1996 for a two-day visit aimed at enhancing defense and military relations between the UK and the Philippines.

Like his brother, Prince Andrew met Ramos during his visit to the country. He also met Philippine military officials, including then Navy Commander Commodore Eduardo Santos when he inspected Philippine Navy ships.

The royal was given full military honors upon his visit.

In March 2015, Princess Anne, the Princess Royal of the United Kingdom of Great Britain and Northern Ireland, visited the Philippines for her charity and various humanitarian work.

The Princess Royal, who is the second child and only daughter of Queen Elizabeth, first visited the Philippines in March 1999.

Upon arriving in the country, Princess Anne paid a courtesy call on then-President Benigno Aquino III at the Malacañang Palace. Some photos showed the Princess Royal shaking hands with prominent Filipino personalities and politicians—including former Vice President Leni Robredo, who was then still a congresswoman.

The Princess also visited communities in Leyte that were severely affected by Yolanda.

The Royal also stopped by the British School Manila, wherein she was greeted with a song performed by the students.

The Princess also met with Ramos during a private dinner hosted by former British Ambassador Asif Ahmad before leaving the country on March 19.

READ: In photos: Princess Anne in the Philippines