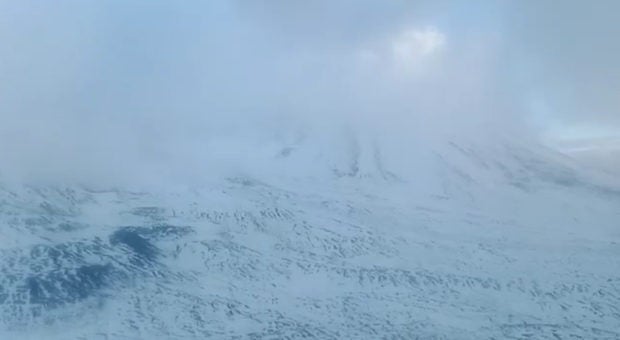 FILE PHOTO: A view from a rescue helicopter shows the Klyuchevskaya Sopka volcano following an accident involving a tourist group of climbers on the far eastern Kamchatka Peninsula, Russia, September 4, 2022, in this still image taken from video. Press service of Kamchatka search and rescue team/Handout via REUTERS TV

PETROPAVLOVSK-KAMCHATSKY, Russia — The three surviving members of a Russian tour group stranded in freezing winds on Eurasia’s highest active volcano were rescued on Tuesday, the regional emergency ministry said, after nine died on their way to the summit.

The party of 12, which included two guides, set off a week ago to climb Klyuchevskaya Sopka, a 4,754-meter (15,597-feet) peak on Kamchatka in Russia’s far east.

After setting up camp at 3,300 meters, eight members of the group and one of the guides set off to climb higher on Saturday, local media reported.

Of those nine, investigators say at least five fell to their deaths at around 4,150 meters on Saturday, while the rest died subsequently, as temperatures on the mountain dropped to minus 14 degrees Celsius (7 Fahrenheit) overnight.

Multiple attempts to land a helicopter at the volcano on Sunday failed due to strong winds and heavy cloud cover.

“They were scheduled to land at an altitude of 3,300 meters, but due to gale force winds at 30 meters per second (67 miles per hour), they failed to do so, although two attempts were made a few hours apart,” the local civil defense authority said.

The three remaining members of the group – two tourists and a guide – were rescued on Tuesday after sheltering lower down the mountain at a cabin used by volcanologists.

The regional emergency ministry said the guide had suffered frostbite but that the other two were in a relatively stable condition. All three were taken by helicopter to a nearby village, it said.

Klyuchevskaya Sopka is the tallest of over 160 volcanoes whose snowy peaks tower over Russia’s Kamchatka Peninsula. It forms part of a Unesco World Heritage Site listed for its exceptional natural beauty.

Rescuers say the mountain, whose surface is covered with mounds of volcanic rocks mixed with snow and ice, is particularly hazardous to climbers due to its altitude and the risk of volcanic eruption.

Investigators are now conducting a criminal investigation into the director of a tour company based in the Siberian city of Novosibirsk.