Greece plans to extend fence on land border with Turkey 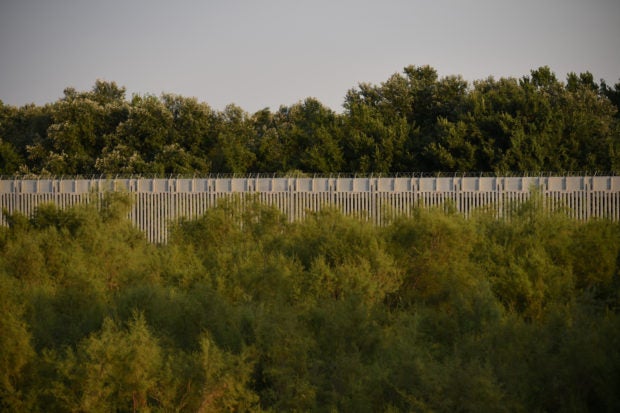 View of a border fence between Greece and Turkey, in Alexandroupolis, Greece, August 10, 2021. REUTERS FILE PHOTO

ATHENS — Greece plans to extend a cement and barbed-wire fence along its northern border with Turkey to prevent migrants from entering the country, its citizen protection minister said on Tuesday.

The 40-kilometers fence will be extended by another 140 kilometers, Takis Theodorikakos said during a visit in the region of Evros.

The fence, initially installed in 2012, was last extended in 2021, a year after tens of thousands of asylum seekers tried to cross into the European Union through Greece’s northern border, when Turkey said it would no longer prevent them from doing so.

Historic rivals while also Nato allies, Greece and Turkey have been at odds over a range of issues, including migration and energy resources in recent years.

Greece was the frontline of Europe’s migration crisis in 2015 and 2016 when a million refugees fleeing war and poverty from Syria, Iraq and Afghanistan arrived, mainly via Turkey.

The number of arrivals has fallen sharply since then, but in recent months, Greek authorities said they have stopped a significant number of people from entering.

According to police data, in the first seven months of the year, authorities arrested 7,484 refugees and migrants, of which 3,554 were in Evros.

Theorodikakos said the project aims to send a clear message of Greece’s determination “against those who invest in human suffering to serve concealed interests” and “against those who weaponize migration in an attempt to blackmail Europe”.

The conservative government also plans to hire 250 border guards and upgrade its surveillance systems in the area.