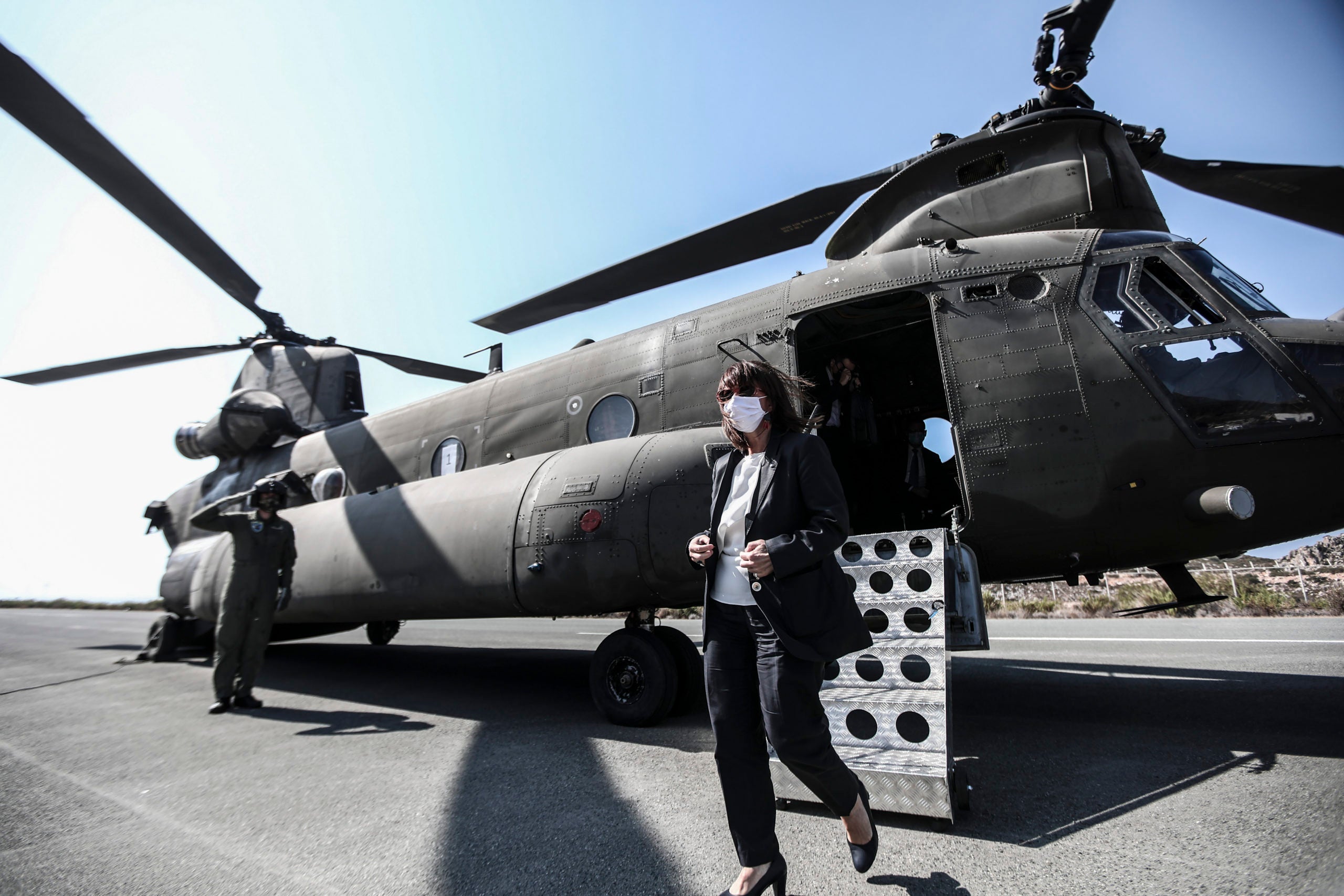 In this photo provided by the Greek President’s office on Sunday, Sept. 13, 2020, Greece’s President Katerina Sakellaropoulou arrives at Kastellorizo to attend the celebrations marking when the southeastern island of Kastellorizo, formally became part of Greece. Greece’s prime minister outlined plans Saturday to upgrade the country’s defense capabilities, including purchasing new fighter planes, frigates, helicopters and weapons systems amid heightened tensions with Turkey over rights to resources in the eastern Mediterranean. (Thodoris Manolopoulos/Greek President’s Office via AP)

THESSALONIKI, Greece — Greece’s prime minister welcomed the return of a Turkish survey ship to port Sunday from a disputed area of the eastern Mediterranean that has been at the heart of a summer stand-off between Greece and Turkey over energy rights.

Greek Prime Minister Kyriakos Mitsotakis said he was ready to try to restart long-stalled talks on the volatile dispute over potential oil and gas reserves, signaling that the two countries could be inching toward negotiations after weeks of increasingly bellicose rhetoric and fears of armed conflict in the region.

Turkey’s Oruc Reis research ship returned to near the southern port of Antalya for the first time in more than a month after Turkey announced in July that it was dispatching a vessel to work in waters where Greece claims jurisdiction.

“This is a positive first step,” Mitsotakis told reporters in the northern Greek city of Thessaloniki. “If we see signs of de-escalation in practice … I will be the first to sit at the negotiating table.”

The deployment of the research vessel triggered a military build-up in the eastern Mediterranean. Nominal NATO allies Turkey and Greece both dispatched warships to the area where the Oruc Reis was engaged in seismic research and conducted military exercises to assert their claims.

“In areas where there is no maritime delimitation, there can be no unilateral actions, and that has what Turkey has been doing in recent weeks,” Mitsotakis said.

NATO intervened, organizing talks between the two countries’ militaries to prevent a potential conflict. Turkey had also come under increasing international pressure to withdraw the survey ship, with the threat of European Union sanctions looming.

Turkey challenged Greece’s claim to that part of the sea and had said it was protecting its own legitimate rights. The Turkish survey ship returned to Antalya after its Navtex, or international maritime safety advisory, for the waters between Turkey, Cyprus, and the Greek island of Crete was not renewed.

Turkish Defense Minister Hulusi Akar said Sunday that Turkey supports peace and dialogue “if our wishes and demands are fulfilled.” He spoke on a visit to Antalya’s district of Kas.

Greek President Katerina Sakellaropoulou was visiting the Greek island of Kastellorizo, located directly across the Mediterranean from Kas, at the same time.

In response to the standoff with Turkey, Greece on Saturday announced a major new defense program that includes plans to buy 18 French-made Rafale fighter planes to replace its aging Mirage 2000 fighters. Mitsotakis said delivery of the Rafale fighters would start in mid-2021.

Greece also plans to buy four navy helicopters and four new frigates, and to add 15,000 professional military personnel to its armed forces by 2025, according to the new defense plan.

Exploratory talks between Greece and Turkey over the continental shelf and exclusive economic zone rights were last held in 2016. Both Greece and Turkey have suffered heavy financial consequences from the pandemic, with tourism, construction, and manufacturing hard hit.