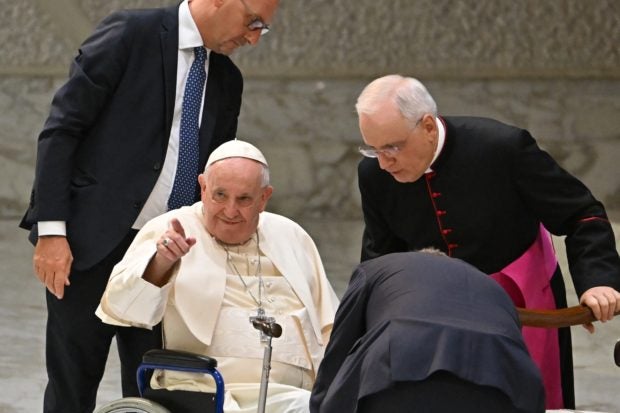 Pope Francis gestures as he leaves on a wheelchair after his weekly general audience at the Paul-VI hall in the Vatican on August 31, 2022. AFP

VATICAN CITY — — Thousands of people are expected to gather in St Peter’s Square on Sunday as Pope Francis presides over the beatification of John Paul I, the so-called “Smiling Pope” who led the Catholic Church for just 33 days before dying in contested circumstances.

John Paul I, the son of a bricklayer from the Dolomite mountains and a particularly warm and pastoral figure, was elected pope on August 26, 1978, at the age of 65.

He died just 33 days later, on September 28, 1978, of a heart attack, making him the shortest serving pontiff in modern church history.

His death sparked intense speculation as to the cause, from suicide — he seemed reluctant to take on the position of pope — to murder, allegedly by those who opposed his plans to reform the church, particularly the powerful Vatican bank.

Many have since discounted this and biographer Christophe Henning said the swirling rumours can be explained by the sudden nature of his death and the “calamitous communication” by the Vatican at the time.

No autopsy was conducted to determine the cause of death, and the Vatican issued inconsistent and false information about what happened.

For example, his lifeless body — sitting in bed, his reading glasses on his nose and typewritten documents in his hand — was found by a nun.

However, the Vatican did not want to acknowledge the presence of a woman in his bedroom, so said his secretary found him.

“For me it does not seem that there is really a doubt” about his death by natural causes, particularly given “we know that he was in fragile health”, Henning told AFP.

The Vatican announced in October 2021 that it had recognised a miracle attributed to John Paul I, allowing him to become beatified, a process when a person becomes “blessed” and the final step before becoming a saint.

The miracle was the sudden healing of a gravely ill 11-year-old girl in Buenos Aires in 2011, after a local priest prayed to the late pontiff.

Under the rules of the Catholic Church, in most cases a second miracle needs to be recognised before someone can be made a saint.

Born on October 17, 1912, in the northern Italian town of Canale d’Agordo, John Paul I rose to become Patriarch of Venice, Cardinal and then head of the Catholic Church.

The last Italian pope, he was seen as a man of consensus, of humility and simplicity and a strong sense of pastoral duty.

“Open to dialogue and listening, he gave priority to pastoral visits and direct contact with the faithful,” the Vatican said in a beatification brochure.

He defended the church’s opposition to abortion and contraception while also seeking to reform its governance.

Sister Margherita Marin, who helped John Paul I in the papal apartments, recalled a man who was “friendly to everyone”.

“He knew how to treat his colleagues with a lot of respect,” she told a Vatican press conference on Friday.

The predecessor of Pope Francis, Benedict XVI, is still alive and living in the Vatican after resigning in 2013.

Pope Francis: ‘I am the devil’ compared to John Paul